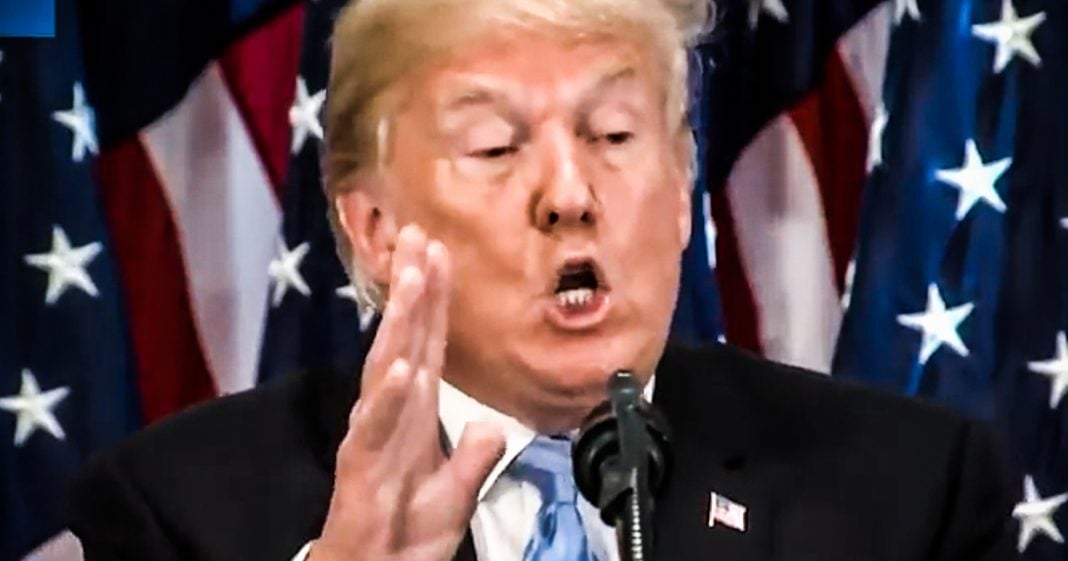 Donald Trump’s White House has hired a 23-year old college student to help carry out his purge of employees that the President believes are not “loyal” to him. This young student has actually been serving in various positions in the administration for several years, including being a secret assistant to Ben Carson. Ring of Fire’s Farron Cousins explains what’s happening in the bizarre world of Trump.

Donald Trump is still trying to carry out his purge of people in his administration that he believes are disloyal to him and this week his administration hired a new kid on the block to help carry out this purge. And no, I don’t mean an actual new kid on the block because this kid they’ve hired is not new at all. They have hired a 23 year old college student by the name of James Bacon, who has actually been in the administration several different times in the past, once even working as a “confidential assistant” to Ben Carson. Now I don’t know what a confidential assistant is. I don’t even know that I want to know what a confidential assistant is. But apparently James Bacon impressed people so much while working at HUD for Ben Carson that Donald Trump has now brought him into the White House personnel office, in between classes of course, because again, kid’s still in college.

So in between making it to his next economics course, Mr. Bacon has to go back to the White House personnel office where he is working with John McEntee, who is now in charge of the personnel office, to figure out which members of this administration are loyal to Trump and which ones need to be let go. And again, this is a 23 year old college kid. He is still taking classes and Trump has put him in charge of running his government purge. Now the reason I bring up the fact that he is a kid and that he’s only 23 and that he’s still in college is this. It’s not because I think 23 year olds aren’t good at what they do or that they can’t be effective in their positions. That’s not it at all. It’s because this kid still has his entire life ahead of him.

He hasn’t even graduated college yet and now Trump has thrust him into this position that is going to be looked upon by history the same way we look at Nixon and his enemies list. This kid is selling away his future for this position in the Trump administration that depending on the election, may only last a little under a year here for you, Mr. Bacon. You can do better, man. If you’re a right winger, fine, be a right-winger, but you don’t have to risk your entire political career or any career you may have working with Trump to fire people who aren’t blindly loyal to him. That is going to scar you and your resume for life. You know this is wrong kid, you know and you’re doing it anyway because you think somehow, I guess, this is going to help you in the future. I guarantee you this is going to be the biggest obstacle you ever face in your life. Every time you go in for an interview, anytime you go, maybe you start your own consulting business, but anytime you bring a new prospective client in, they’re going to ask you, aren’t you that guy that carried out the purges of the Trump administration?

And you’re going to have to come up with a dang good answer as to why you did that in between your classes for your last year of college, man. You’re not thinking this through. Your whole future could be at stake. Most people who have worked for Donald Trump don’t typically leave there thinking, well, that was a very pleasant experience. I can’t wait to move on to my next project. He ruins people’s lives and it’s one thing when you get these people coming in, they’re grifters just like Trump and their grift gets ruined because of his grift and now, oh, they can’t do it anymore. Yeah, those people deserved it. You could still be so much better, Mr. Bacon, and I am encouraging you get out of that administration before it does permanent damage to your reputation for the rest of your life.