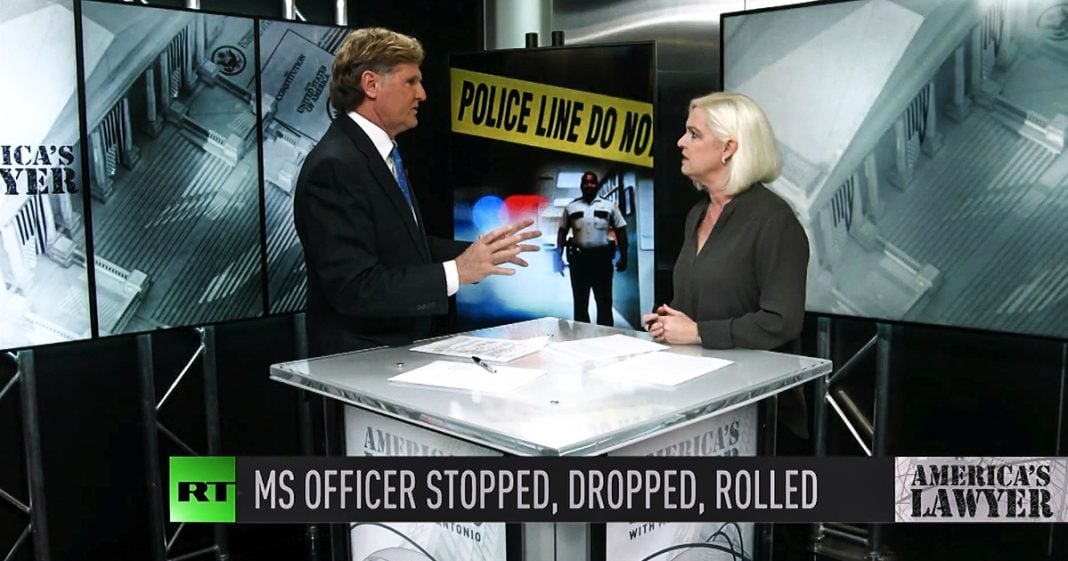 Via America’s Lawyer: Mike Papantonio is joined by legal journalist Mollye Barrows to break down a tragic case in Mississippi, where Attala County Deputy Darrin Fleming gave a ‘courtesy ride’ to Gerald Simpson, who had a mental disability rendering him incoherent. Simpson was killed by a passing motorist after the sheriff dropped him off just outside the county line. Just who is to blame here for Simpson’s death?

Mike Papantonio:             A federal appeals court ruled that a Mississippi police officer who had driven and left a disabled man at the County line wasn’t liable for the man’s death after he was struck and killed by a passing vehicle. Very complicated case, but it’s pretty straight forward in what the police officer did wrong. I have legal journalist Mollye Barrows with me to talk about it. Lay out the facts of this case. I mean, I read the first three or four paragraphs of the, of the case and it’s, it’s clue, it’s clear to me due process, equal protection, all of these constitutional issues come into mind but the court, the appellate court, fifth circuit, probably one of the worst circuits in the country.

Mollye Barrows:                Oh my gosh. And when you hear the facts of this case, you think, why don’t you see any problems with this? And basically what happened is this particular officer, Darren Fleming, was assisting two city police officers in the city in Mississippi and it was a town of Kosci, Kosciusko and the County was Attica or Attala, pardon me. And so he was assisting these city officers who found this man, Gerald Simpson, walking in the middle of the road. He couldn’t speak clearly. Turns out he had a speech impediment. He’d been treated recently at a local hospital for developmental disabilities.

He lived with his sister who was essentially his caretaker and he’d gotten out that night. So he was walking in the middle of the road. The city officers find him. This deputy comes and assists, puts him in the back of his patrol car, takes him to the County line and basically says he’s giving him a ride home. But he never asks for his identification. He never asks for any kind of information that could help lead him to some family member to where this guy actually lived.

Mollye Barrows:                So he took him to the County line, which when this man’s family, and where he was hit and killed. So he drops him off, leaves him, makes sure he’s walking out of Attala County, and then he takes off. And the, and Mr. Simpson was later hit and struck by another vehicle that night and killed and his family filed a wrongful death lawsuit, not only against this officer, but also against the two city officers in the, in the city itself.

Mike Papantonio:             Okay. Let me, let me lay this out just a little bit on the, on the legal aspect. First of all, this is a County that does this, city and a County that worked this little scam all the time. Homeless person, somebody who’s drunk and maybe just living on the street, they don’t know what to do with.

Mike Papantonio:             Probably concluded that he was drunk and that he was a homeless man, although he was being taken care of by his sister, as you point out. What really sends me over the edge on this is the fifth circuit saying there was no constitutional violation here in what happened. Due process. Okay.

Mike Papantonio:             Would we have, would we have not at least given this guy the opportunity or somebody to explain he’s, he, he has a mental disability, has a speech impediment.

Mike Papantonio:             Okay. Or how about equal protection? You think if this character was dressed up in a suit with a tie carrying a briefcase that this cat would have driven him to the County line and dropped him?

Mollye Barrows:                He would have said like, oh, where do you live, how can we help you? You know, you’re a, you appear to be an upstanding tax paying citizen. But basically they said that he was entitled to qualified immunity, this officer was, and that’s why he couldn’t be sued for wrongful death, which essentially allows a government official to be shielded from civil liability if it doesn’t violate a person what’s called their clearly established constitutional rights. And they were saying in this particular instance, it wasn’t clearly established that his constitutional rights were violated because, and I’m not entirely sure I followed the reasoning that it’s not.

Mike Papantonio:             There was no equal protection here and that’s a basic fundamental constitutional right. How about due process? This officer makes the, he makes the determination, hey, I’m just going to be the judge and the jury. I’m going to carry him to the County line. I’m not going to make any effort to figure out what’s his disability. He doesn’t sound right and he’s not speaking right. I can’t smell alcohol, but something’s wrong here.

Mollye Barrows:                Well, what do you do if you’re not there to serve and protect? You’re only there to serve and protect the people that you feel that qualify to have their constitutional rights protected? And in this case, I was surprised that they actually upheld that decision. A lower court said that they had actually dismissed the case against the two city officers in the city, but they had allowed it to move forward against the County and this particular deputy. So it was this, you know, this fifth circuit court of appeals that, that basically overruled the lower court’s decision.

Mike Papantonio:             That all the ugliest things happen at the trial court level, the appellate court level, and when they start packing those, when, when those are packed with ideologues, this is the kind of thing that happens.

Mollye Barrows:                Well that’s exactly what I wonder too, pap, and I know you’re wrapping it up, but I thought how could they justify this decision? It’s one of those things on the, on the, it just seems obvious they should have been doing their job and protecting this man. At the very least, should have taken him someplace where they could have gotten to the bottom of who he was.

Mike Papantonio:             You could ask any lawyer in the country and they’ll say, oh, it was the fifth circuit. I mean, isn’t that awful when it gets to that point?