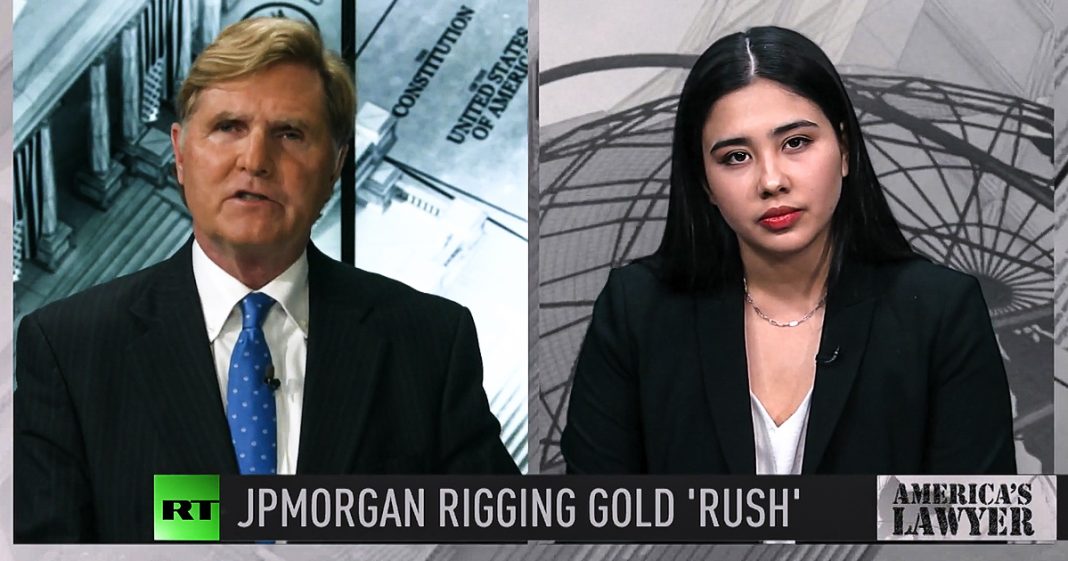 Via America’s Lawyer: RT correspondent Michele Greenstein joins Mike Papantonio to walk us through a developing criminal case against bank behemoth JPMorgan, which is being accused yet again of manipulating precious metals markets for the express profit of its own clients and investors.

Mike Papantonio:             Federal prosecutors are turning their attention towards bank behemoth JP Morgan, which is accused of manipulating gold and silver prices for the benefit of their clients and their shareholders. Michele Greenstein joins me now to explain what’s happening with this case. First off, run us through these allegations, Michele, you’ve covered this story a fair amount. It’s, it’s a story that again, corporate media isn’t covering this one. What is your take on this story?

Michele Greenstein:         Well, US authorities are building a case, although formal accusations have not been made against the bank, but according to two people who are familiar with the matter who spoke with Bloomberg news, US authorities, like we said, are building a criminal case against JP Morgan. Now both the bank and the DOJ declined to comment, but a bank spokesperson did confirm that the DOJ is investigating “trading practices in the metal market and related conduct.” So Pap, what we’re talking about here is metal market manipulation that is intentionally misleading or spoofing members of the metals market. So gold, silver, platinum, palladium, all of these are the precious metals, right? And what market manipulation looks like is this.

They are placing bids to buy or offers to sell contracts on these metals without intending to follow through on them, without the intent to go through on these orders to actually cancel these orders. So they’re creating the illusion of either increased or decreased demand to influence prices and benefit their own market position. Now of course, this reported criminal case against JP introduces the prospect of criminal charges and fines against the bank, although some say that’s unlikely given the fact that it is the largest bank in the country and the close relationship that implies with the US government.

Mike Papantonio:             Michele, I believe I remember your coverage on the HSBC saga. Here, let me draw some parallels. We’re terrified, the department of justice in this country, is terrified to prosecute white collar criminals who are dressed up in Armani suits, have a Rolex watch, an MBA from Harvard and drive a Bentley. We will not prosecute them. HSBC, where we clearly knew that these people had washed money for terrorism. They actually signed documents saying, yes, we did that. Yes, we knew human lives were at risk.

Yes, we know American soldiers died because of it. Yes, we did wash money for terrorists. Yes, we knew they were terrorists. And you know what? The department of justice lets them go. Now I look at this case and I say, what more does it take? Isn’t this, this isn’t the first time, for example, JP Morgan has been the target of allegations involving metal market manipulation. Give us a background on that if you would. This isn’t their first rodeo, is it?

Michele Greenstein:         That’s right, it’s not. And right now there’s actually a civil case that’s frozen against JP. It’s a class action against the bank and a group of precious metals traders employed by the bank. And the complaint alleges that they, and the bank manipulated futures contracts again through spoofing. This goes back to November of 2018 and one of these employees that same month, John Edmonds, actually pled guilty to engaging in a six year spoofing scheme that defrauded investors in precious metals and he pled guilty to commodities fraud and com, commodities price manipulation.

So here’s the language of the complaint. Edmonds and several unnamed employees orchestrated a scheme to “inject materially false and illegitimate signals of supply and demand into the market and to induce other market participants to trade against the orders that were placed by the defendants.” So the class action says that these people are again manipulating futures contracts.

Now, the reason that case is frozen is because then a year later in September of 2019 the DOJ charges JP Morgan executives of doing the same thing in a criminal case, manipulating the precious metals market by placing false orders of, again, gold and silver. So the New York federal judge decided that the civil antitrust action is frozen for now until the end of June, 2020. But Pap, here’s what I think you’re going to find interesting about this criminal case against these JP Morgan executives. One of which was the head of the precious metals trading desk, is that they’re being charged under the RICO act, which as you know, is traditionally applied to mafia cases or other organized crimes.

So prosecutors call it a “massive multi-year scheme to manipulate the market for precious metals, futures, contracts and defraud market participants.” And say that because the conduct was widespread on the desk, the DOJ is choosing to employ the RICO statute here. According to prosecutors, this was not an isolated case. It was going on to close to a decade, spoofing the market for years by manipulating thousands of orders for gold and silver to benefit the bank’s own market position and of course the position of its clients.

Mike Papantonio:             So, so you have to ask yourself, at what point will federal pros, prosecutors understand just because they don’t look like criminal thugs because they’re dressed up different from the mobster, maybe, just cause they don’t look like that, the DOJ says we’re not going to prosecute. You know, you wonder, you have to wonder Michele and I wanted to follow up on this story as it develops, you have to wonder, what does it take for us to understand that cultural change in this country about how we treat white collar thugs has got, it’s got to take place sooner or later. It should take place here.