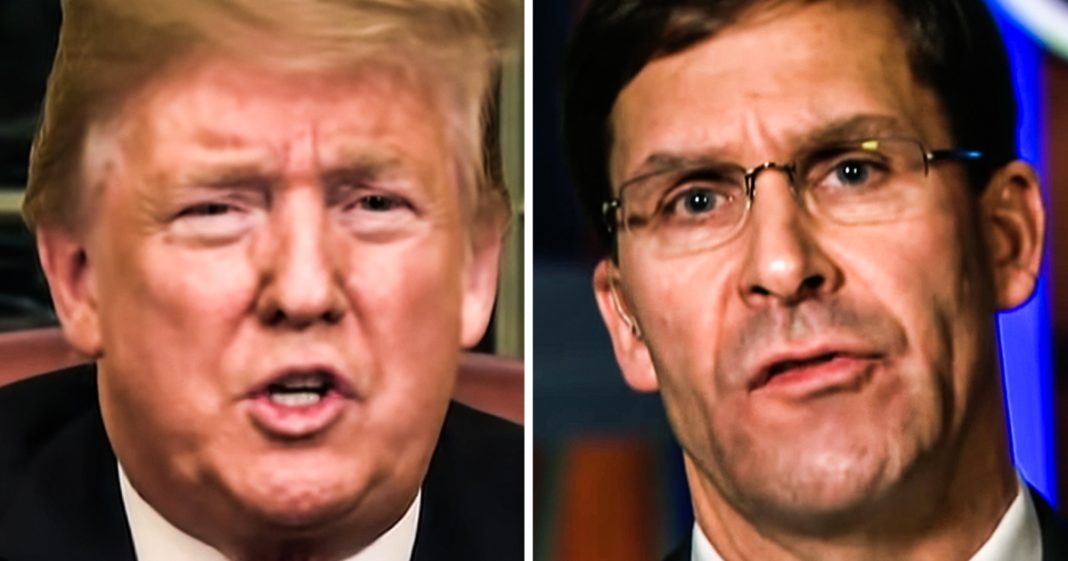 Donald Trump has signed a memo that effectively gives Defense Secretary Mark Esper the ability to end collective bargaining rights for 750,000 federal workers. These workers, represented by The American Federation of Government Employees, could lose benefits that they have worked for decades to build, but none of that matters to Republicans who want to see unions destroyed. Ring of Fire’s Farron Cousins discusses this.

Donald Trump believes that he has identified one of the greatest threats to national security here in the United States and no, it’s not immigrants, as he said before. It is not all these groups over there in the Middle East that chant death to America. It’s not even climate change, which is what the Pentagon has told us is one of the greatest national security threats. Nope, folks, one of the greatest national security threats to this country today according to Donald Trump, is labor unions, specifically the collective bargaining rights of roughly 750,000 federal employees with the department of defense. Last week, Donald Trump signed a memo giving Mark Esper, the defense secretary, the authority to override the collective bargaining rights of those 750,000 employees. Because, gosh darn it, sometimes the Pentagon has to make very quick decisions and if you have to go through and wait for the collective bargaining for the union meetings to happen and all of that, then oh my God, something horrible could happen here in the United States because you’ve got all those union members yelling back and forth and they’ve got to take votes on things.

A very democratic process. But Democratic processes don’t work in authoritarian regimes, which is what Trump is trying to run. So he signs this memo authorizing Esper to say, you know what, you don’t have to listen to them. You don’t have to get their input. You don’t have to take any of their rights and, you know, benefits into consideration when you want to do something with the Pentagon now. And again, he says we’re doing this because of national security. We don’t have time to wait sometimes. But the truth is that’s a lie because there was already the 1978 civil service reform act that already gave the Pentagon the authority to do that in measures of national security. So Trump didn’t need to write this memo if that in fact was his concern, but that is not as concern. His concern was the fact that you had 750,000 federal workers for the US government that probably had pretty decent healthcare. That were probably making pretty good wages. That probably got a substantial amount of time off.

You know, basically what most workers in this country enjoyed up until about the 1980s when Reagan came along and the union busters and we decided to kill all of that. The people who still have strong unions representing them like these 750,000 workers, they still enjoyed a lot of that. Maybe not to the extent that they once did, but certainly more than most other American workers and Trump wants to kill it. That’s the goal of this, to kill the union under the guise of national security. There is no threat from this union. There is no threat from collective bargaining rights other than these people get to make living wages with pretty decent benefits and for Republicans, and unfortunately at this point, apparently some Democrats too, that’s not okay, and they’re trying to kill it.

This is not the first time that Donald Trump has tried to strip benefits from these federal workers. He also announced just a week or two ago that they would not be getting their scheduled two and a half percent raise this year. They would instead be getting roughly 1%. Back in 2017 they tried to strip them of some of the things they had gained through collective bargaining, some of their healthcare rights and their paid time off and they’re guaranteed wages, they tried to cut some of that back. Luckily that didn’t end up happening. But it just shows you and in fact honestly it shows you one of the reasons that this whole union argument that, oh, well unions fought so hard to get healthcare and if we do Medicare For All, it undermines all their hard work. Folks, listen, listen, we have a entire political party, Republicans devoted to destroying unions and what they’ve earned and gained over the years, what they fought for. These unions will eventually most likely, unfortunately be destroyed. And when they are, there goes that healthcare plan you fought for decades for and you got nothing to fall back on.

A plan like Medicare For All doesn’t strip you of what you fought for. It just makes it one less thing you have to keep fighting for. Because if they didn’t fight for it tooth and nail every single year, they would lose it. So instead we want to replace it with something, so they don’t ever have to worry about that again. They can fight for other things like higher wages or more paid time off or maternity leave and paternity leave, things like that. Because the second you stop fighting for it, as this administration has proven, they’re going to take it away from you one way or another.