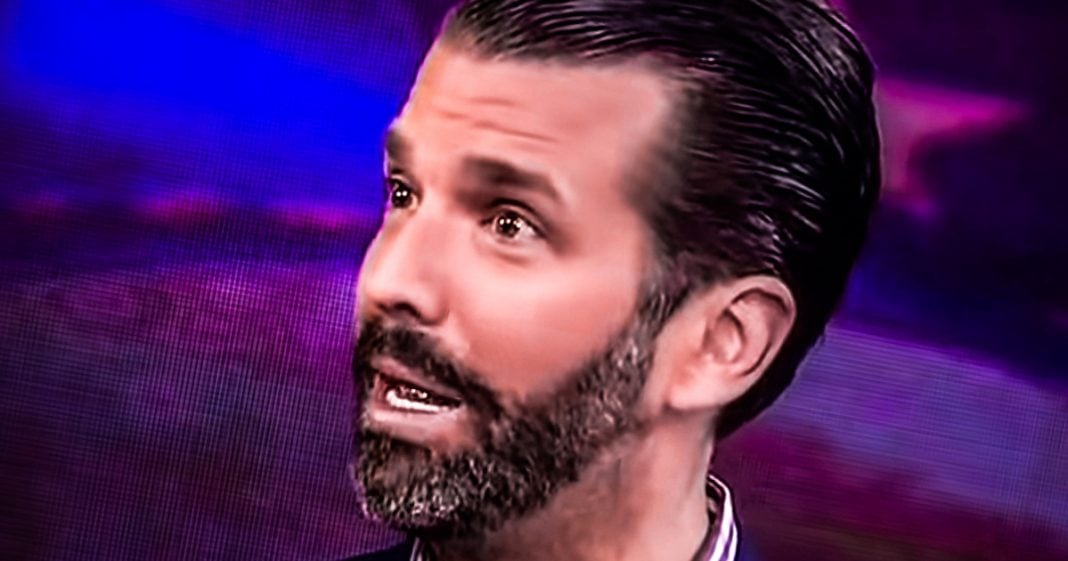 Donald Trump, Jr. isn’t very optimistic about his father’s chances of getting things right with regards to the coronavirus, and he said this week that “hopes” the administration doesn’t bungle the response, but that isn’t a very reassuring assessment. The truth is that this administration has slashed the agencies that are meant to protect us from things like this, and now they are feeling the consequences, as Ring of Fire’s Farron Cousins explains.

Donald Trump jr has always been one of his dad’s biggest cheerleaders. He has championed his father’s trade wars. Championed the wall. Championed everything this guy has done, cutting regulations, things that actually hurt average working Americans, things that are basically policies designed to fail. But Trump jr has always come out and said these things are great. So it’s a little concerning this week that Trump jr himself, according to reports, has been talking amongst his friends and other folks that he is concerned that his dad might screw up the response to the Coronavirus. The guy who has cheered on everything his dad has done, even if they knew it was going to fail, still said it was the greatest thing ever is now saying privately, oh God, I don’t know that they can do this. I hope they don’t bungle it, according to reports is what he said, because this could severely hurt his chances for reelection. Here’s the thing, Donnie, your dad is going to screw this up and do you know how we know? Because your dad has already screwed this up.

They lied. They hid the information. They told the Senate earlier this week in private, which left both Republicans and Democrats wondering, why aren’t you telling the public this? This is important information. We need to keep everybody safe and you’re hiding it. And then of course you have the fact that your father has cut health and human services. He has cut the centers for disease control. He has cut every single organization and agency that should be helping us prepare in case the Coronavirus does what they say it could do and show up on our shores and sweep across the country.

And Trump jr is only worried about his dad’s reelection. Oh no, what’s going to happen if people over here start getting this virus because he didn’t do his job? That means I’m not going to get to play president’s son anymore. That means I’m not going to ever walk in the White House again. Oh no, that can hurt my potential chances of running in 2024 if my dad allows people to get killed because he doesn’t know how to contain a virus. But here’s the thing folks, this is what happens when you put a moron in the White House and I know in the past, I mean you know, a couple of days really, I have talked about the fact that everybody needs to take a deep breath with regards to the Coronavirus and I still mean that, but only in regards to the media. All right, the media does love to focus on these things and freak everybody out.

The people we need to be listening to, it’s not CNN, it’s the CDC, it’s HHS, it’s doctors and they are telling us that we need to be prepared and so we do need to be prepared. This thing could hit here and it could affect millions of people. The estimates right now show that they’re saying this thing could infect 40% to 70% of people on the planet. Obviously that’s a lot and with a two and a half percent mortality rate from this, that could be lots and lots of death or it could end up not being, we don’t know. And that’s probably the scariest part. But that scary part is what the media feeds on and that’s why we need to tune them out and just listen to the experts because the media is what angers me about this. You know, that’s, that’s where my anger is directed.

It’s not at people freaking out about this. It’s about the media trying to freak people out about this. The experts are trying to tell us what to do, and they’re doing that in spite of Donald Trump, not because of him. He doesn’t know how to handle this. He has never dealt with a situation like this. He has never had a pandemic that he has had to try to control. And because he’s put nothing but morons in charge of the government departments designed to help us, we could be in for a pandemic that’s a lot worse than it should have been, if only we had elected somebody semi competent to be our president.