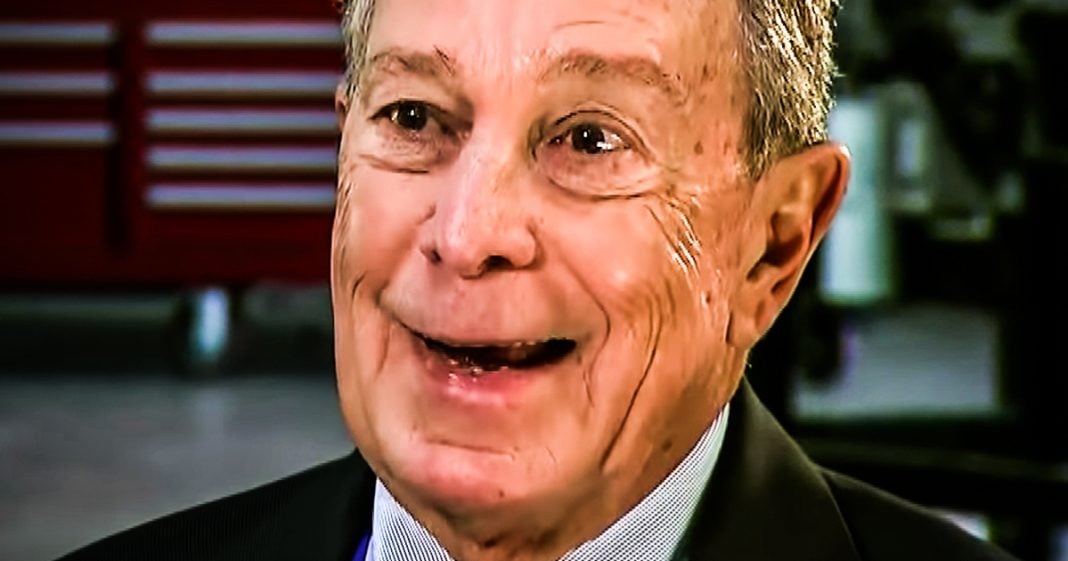 During an event sponsored by Goldman Sachs in 2016, Michael Bloomberg vowed to “defend the banks” if he ever became President of the United States. After this audio was released, Bloomberg’s staff tried to play it off as a joke, but this is no laughing matter. Bloomberg is a member of the 1%, and he will always fight to preserve his status there, as Ring of Fire’s Farron Cousins explains.

Well folks, another day and another newly released Mike Bloomberg audio set that once again shows that this man is 100% a Republican and should not be trusted by anybody who considers themselves a Democrat. In this new leaked audio, which came from a Goldman Sachs closed door event at Yankee Stadium in 2016, Mike Bloomberg vowed that if he were president, he would defend the banks. That is who Michael Bloomberg wanted to protect. He also mentioned that Elizabeth Warren and her very strong anti-banking platform was scary. Mini Mike Bloomberg was scared of Elizabeth Warren and after what we saw in last week’s debate, he damn sure should have been afraid of Elizabeth Warren.

But here’s the thing. Here’s his statement. This is what Michael Bloomberg said and his campaign has in fact confirmed that this is authentic, but I’ll get more to their statement in just a moment after I read what he had to say. Well, to start, my first campaign platform would be to defend the banks and you know how well that’s going to sell in this country. But seriously, somebody’s got to stand up and do what we need. A healthy banking system, and that’s going to take risks because that’s what creates the jobs for everybody. And no bill, nobody’s willing to say that. The trouble is these campaigns in this day and age really are about slogans and not about issues anymore. And in this election, you’re going to see people are voting and they’re either love or hate, mostly hate both, but you hate, but who you hate the least.

That’s what they’re going to vote for and they’re not going to vote on issues. Now, let’s be honest, he’s right about that, about 2016. It wasn’t about whose issues you liked more. It was who do you hate less. So he was right about that. But as far as the, we need a healthy banking system because that’s where the jobs come from? No, like that’s, that’s not even a thing bud. You’re, you’re literally making that up. Sure, yeah, there’s jobs in the banking industry, but there’s millions and millions and millions of jobs in this country that have no bearing on the banking industry whatsoever. You’re, you absolutely made that up and no, no, first of all, we don’t need the banks to go out there and start taking risks, you moron. That is what led to the massive crash of 2007 and 2008. The banks were engaging in risky behavior. We know that. They were gambling on their own loans, betting they would fail so that they would make money off the insurance policies on those. Then also be able to foreclose homes, get the money off that. They made money hand over fist until suddenly they didn’t because of their risky behavior.

That’s why, you know, we had all new banking regulations come out to stop the risky behavior. But Bloomberg thinks that’s what we need to get back to. He thinks we need risks. No, this is also the guy that says we need to bring back red lining because African Americans buying homes is what led to the crash. Michael Bloomberg doesn’t understand America and he sure as hell apparently doesn’t understand economics, or at least he’s choosing to pretend that he doesn’t understand it. So as I mentioned, we got to get back to the campaign’s response to this, and this is what you had Stu Loeser spokesperson for Bloomberg came out and said the opening line was a joke. In the more serious parts of the speech, Mike tells very wealthy Americans that they need to break their addiction to cheap money that’s exacerbating income inequality in America. And sure he addressed income inequality in this same speech after he’d vowed to defend the banks after he said they need to engage in risky behavior because the truth is Michael Bloomberg is a member of the 1%. I mean, when we’re talking about wealth in the United States itself, he’s a member of literally the top 10 people, not just the 1%, the top 10 humans in the United States.

He’s, he, he’s in there. He wants to preserve that wealth. That’s why he’s running for president. This isn’t about beating Trump, it’s about preserving his wealth. He doesn’t care about income inequality in this country because he’s done nothing to help it. He’s done nothing to solve it. He could have put his money to good use, but he refuses to do that. He wants to go out there and act like he cares. He wants to talk about some of these things as if he knows how to fix them. But at the end of the day, this campaign today and his statements back in 2016 are all about self preservation. Bloomberg doesn’t want to lose any money to paying more in taxes, but his campaign ads that he’s running coast to coast are trying to tell you the opposite. They’re trying to tell you Bloomberg is a man that cares. Bloomberg is the man with the plan. Bloomberg is the man that can beat Trump. No, Bloomberg is the guy who’s just like Trump that thinks he can buy his way into the White House and end up eventually making a lot of money off it. Two peas in the same narcissistic pod, that is Trump and Bloomberg.