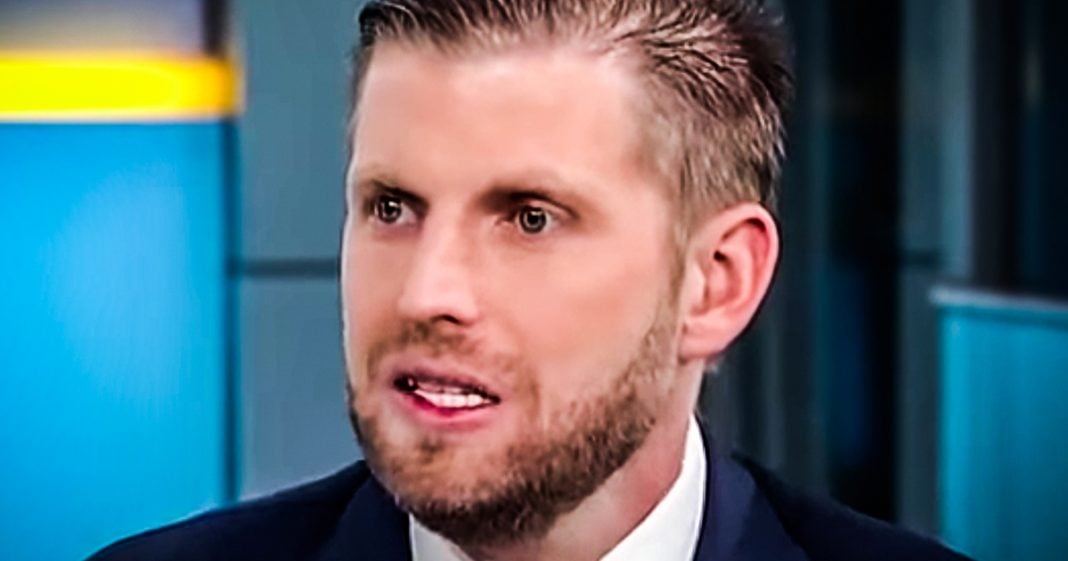 Eric Trump has Secret Service detail, and that means that he is protected by our tax dollars wherever he goes, and that includes several trips to South America to work on business deals. These are not government-sanctioned trips, they are for his own personal wealth, but he still gets to charge taxpayers tens of thousands of dollars to protect him. Ring of Fire’s Farron Cousins discusses the absurdity of all of this.

Eric Trump has been traveling back and forth to South America for a couple of years now. Working on business deals with the Trump properties down there in Uruguay, and as such, he has cost us taxpayers more than $170,000 for just the cost of the secret service having to go with him. Having to stay at those super expensive fancy hotels that Eric Trump likes to stay in. Eating at the same expensive restaurants that Eric Trump likes to eat at, all on the US taxpayer’s dime. And the question is why? I understand, okay, I fully 100% get it, that the president and the president’s family gets secret service protection, right? We’ve seen it with all the past presidents since the creation of the secret service, and they do it to protect these people because they believe that their lives are in greater danger, obviously, than that of the general public and that is probably true. But we have to draw the line at some point, right?

Eric Trump’s a big boy. He is a grown up. He also has more money than most people in this country could ever even dream of. He could afford his own security detail and in fact, has it as did his father, as does his brother and his sister. They pay for their own security and they get secret service? No, this is ridiculous, folks. We have to draw the line somewhere. I mean, where in the Trump family tree do we cut off the secret service protection? Huh? Is there some long lost second cousin out there with a secret service agent detailing them? I mean, we have to do this. Eric and Don jr who are spending hundreds of thousands of dollars on the secret service or our money, by the way, they’re not a part of this administration. They’re not out there doing official government business in any capacity. They’re jet setting around the globe, working on business deals to put more money in their own pockets.

Why should we, the taxpayers have to pay for that? The answer is we shouldn’t. Now, if it were a family vacation, if Donald said, hey, come on all my kids, Ivanka and Eric and whatever the little one’s name is. You all come on, we’re going to Disney world then heck yeah. Secret service protection for everybody. You’re all together. You deserve it. But if Eric Trump’s just sitting up in his ivory tower and decides, you know what, I’m going to fly to South America, go ahead and work on some business deals. Hey, secret service detail, come on. Bring your wallets because it ain’t gonna be cheap. No, I’m sorry folks, but no. We have to draw the line somewhere. We are hemorrhaging money because the Trump family likes to travel around the world and stay in the most expensive places they can find. That’s not fair to us. They can afford their own security details and in fact, as I mentioned, most of them already have it anyway. Secret service is just an additional little thing that they get to feel cool and important. They don’t need it and we sure as hell as a country don’t need to be paying for it.