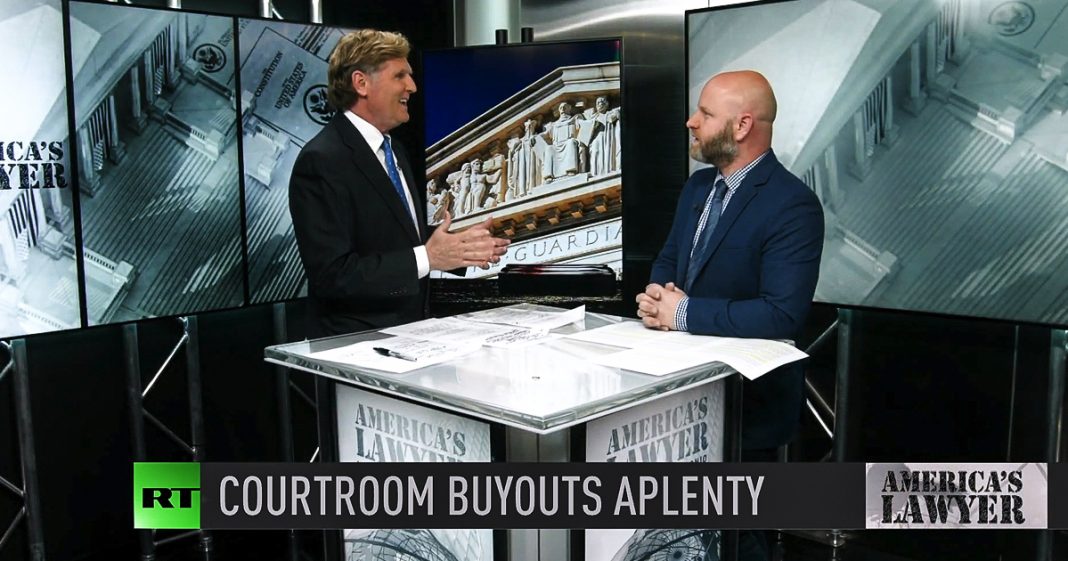 Mike Papantonio:             Corporate money has a toxic influence on our elected officials and there’s a broad agreement about that from both the left and the right. But what most people don’t understand is that judges are for sale just like other politicians. I have Farron Cousins from the trial lawyer magazine. He’s probably written more about this than most journalists. This is right up in our face and the interesting thing about this story is for years we’ve been talking about the Democrats paying all this attention to the White House, Senate races, House of Representatives, and they never quite understood that policy is made in the judiciary. That they can pass laws all they want and Washington, but if the judiciary changes those laws by judicial caveat, then, you know, what, what actually happens?

Farron Cousins:                  What we’re seeing right now, and I, every two years I have to do a new story on this because every two years the money increases. But it’s the same as it always has been since Citizens United. We are seeing tens of millions of dollars being spread out all over this country. Most of it focused at the moment on state Supreme Court races and they’re actually targeting races down in the South. You’ve got West Virginia, you’ve got the Carolinas all the way through Mississippi, Alabama, Georgia. This is happening all over the place and it’s because, as you mentioned, this is where policy really gets decided. Legislatures, state level, federal level, they can pass whatever they want, but if it doesn’t stand up to the scrutiny of the court, it’s overturned.

Mike Papantonio:             One thing we’ve talked about early on that it’s just absolutely so relevant and it’s just right up in our face right now is the Citizens United. Okay. Now everybody missed the point to Citizens United. The Federalist Society where the people promoting Citizens United. They were all in. They did the amicus briefs. They spent money trying to make it happen and the point was, we, the average person out there thought, whoa, well this is about the White House. This is about the Senate. Citizens United is a way that corporations and the Chamber of Commerce and all the bottom feeders, the really ugliest of the uglies in corporate America can put their people in the, in the House or in the Senate or in the White House. Totally different analysis. It really had to do with the judiciary because when you own the judiciary, I don’t care what laws are passed in Washington, DC it doesn’t mean anything. It’s like Obamacare. Oh, Obamacare is passed. Well, no, not really because of the judiciary has the right to chop it off at the knees at every turn. Right?

Farron Cousins:                  Yeah, and they’ve been doing that. There’s a huge case right now, the Supreme Court’s agreed to put that off until after the election, but, but it’s going to do exactly what you said. It’s going to cut Obamacare in a way that it’s going to make it unrecognizable and completely useless.

Mike Papantonio:             It started at the federal appellate judge level.

Farron Cousins:                  And that’s what people never focus on. They wait until something goes to the Supreme Court because then in their mind, suddenly now it’s a big deal and we’re talking only a hundred to 150 cases per year. These judges that these organizations like the Republican senatorial leadership committee, judicial crisis network, the Federalist Society pumping these millions of dollars into all the state Supreme Court and appellate, or not appellate court, but other local.

Farron Cousins:                  It costs a lot more money to buy a House of Representatives member than it does a local judge. You can buy that local judge, and we saw this in Pennsylvania back in 16 I believe, for $5,000 and that’s all it took. And the Koch brothers did that in Pennsylvania. Bought a couple of local judges, spent a few hundred dollars on school district races to get fracking allowed in this little community and the judge passed it.

Mike Papantonio:             But, but the average Democrat thinks, oh, this is about the White House. It’s about the Senate and House of Representatives, nothing’s further than the truth. They don’t understand the impact of the judiciary.