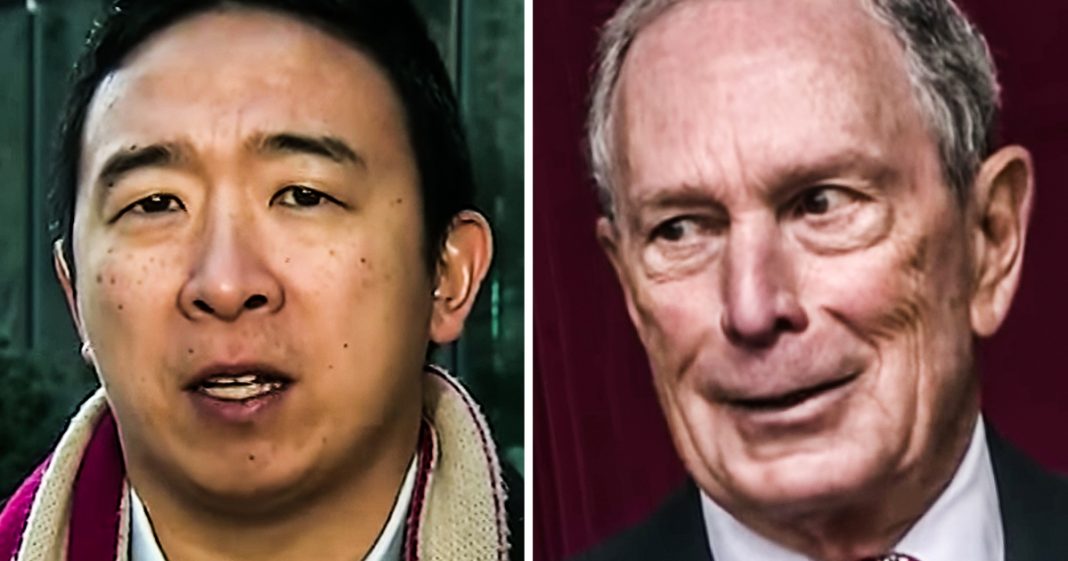 According to new reports, Michael Bloomberg’s campaign has been reaching out to Andrew Yang about possibly becoming Bloomberg’s VP pick if Yang is willing to come out and make an endorsement of Bloomberg. According to Yang, several other candidates are also reaching out, but Bloomberg appears to be the most desperate, and Ring of Fire’s Farron Cousins explains why.

According to reports this week, Michael Bloomberg’s campaign aides have been reaching out to Andrew Yang to see if Yang would be willing to come out and publicly endorse Michael Bloomberg and possibly if the endorsement does well end up with a VP slot on a Mike Bloomberg 2020 ticket. So it kind of seems like Bloomberg is once again trying to bribe his way to the top of the pack. But Andrew Yang has said he is not necessarily going to accept this offer at the moment. He is also, according to himself, received offers from other presidential campaigns, which is not surprising. But to me it seems like Bloomberg’s campaign is obviously the most desperate to get Andrew Yang’s endorsement and here’s why. Ever since Yang dropped out, people have been speculating who is he going to support? And the reason is because Yang has a huge base of followers. Obviously it wasn’t enough to put him at the top of the pack and keep his campaign going, but it was big enough to where it actually propelled him ahead of people who are already elected officials and everybody knows their names.

Yang was an unknown and built this massive thing that beat out people who have been in politics for years. That is incredibly impressive. Yang also had some really great ideas on the campaign trail that didn’t involve universal basic income. When you go past that one big thing, he actually had some really awesome other things to talk about as well. So Yang is a coveted endorsement and that’s why Bloomberg wants it so desperately. Not just because he wants Andrew Yang to be on his side, but because he wants Andrew Yang’s followers to be on his side. Because the one thing that Michael Bloomberg doesn’t have, the one thing that his money has not been able to actually purchase is genuine enthusiasm for his campaign. Andrew Yang had that. Yang had people that were fired up that went to his website, read through all of his policies and said, this is the guy, this is the one that I want. I like what he has to say. I’m going to go out there and spread the word.

Bloomberg doesn’t have that. Bloomberg has to pay people to do that and most of the, or some of the people he’s paying, are actually telling people like, yeah, disregard Bloomberg, go vote for Bernie or Warren instead. You can’t buy loyalty. Yang earned it with his policy positions. Now Bloomberg wants to bribe Yang into bringing it along onto his campaign. It’s not going to work. I think if Andrew Yang did come out and endorse somebody like Bernie Sanders or even Elizabeth Warren, I think most of Andrew Yang’s Yang gang would follow him. But if he goes and endorses Bloomberg, I think you’re going to have a lot of people out there saying, well he’s clearly a sellout. He’s just another bought and paid for Bloomberg stooge and that is exactly what would happen and to be honest, that is exactly what it means. In the meantime, Yang again has not said that he is going to come out and endorse anybody yet, he is currently actually still weighing his own future. Yes, he is now a CNN contributor, but he’s not sure exactly what he wants to do from this point forward. And so while he figures himself out, he’s going to listen to the offers from the campaigns, but probably not jump on anything until he knows for sure where he wants to go with his political future.