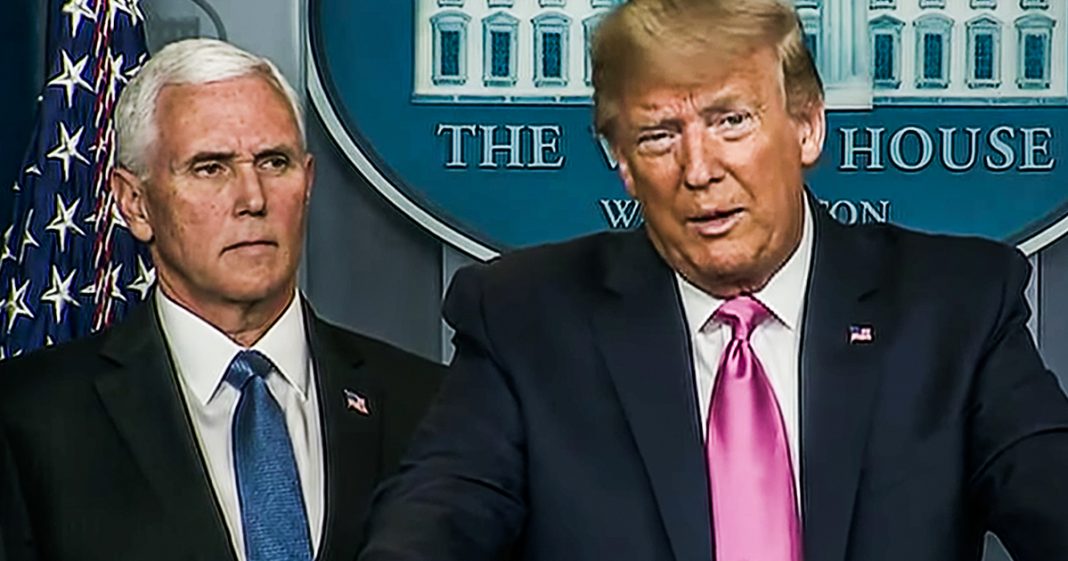 Donald Trump has appointed his science-denying vice president Mike Pence to head up the administration’s coronavirus response, leaving both experts and the public wondering how long until we’re all doomed. Pence once wrote an op-ed saying that smoking doesn’t kill, and his policies were directly responsible for the largest HIV outbreak in Indiana’s history. Ring of Fire’s Farron Cousins discusses this incredibly dumb and dangerous decision by the White House.

Lots of people in the United States are freaking out about the Coronavirus and as the news stories continue to come out about this, maybe it’s okay to freak out a little bit about it, especially after the news that we got yesterday during Donald Trump’s press conference where he announced that Mike Pence is going to be in charge of the Coronavirus task force and Mike Pence is going to be in charge of the policy to protect the United States from this virus. That’s right, folks, Donald Trump thinks Mike Pence is the man for the job, even though Pence has repeatedly failed on issues of both health and science. When Pence was governor of Indiana, he oversaw the largest outbreak of HIV in history in that state, and it’s directly related to his policies, two specific policies from Mike Pence. First and foremost, the needle exchange program. Indiana did not have one. Lawmakers wanted to get one. The CDC said that you need one because it reduces HIV and Mike Penn says, no, this does not jive with my Christian values, for some reason. I don’t remember needle exchanges being in the Bible, but maybe that’s just me. But anyway, I don’t like this. It goes against my religion. We will not in fact do a needle exchange and HIV rates increased.

But hey, at least they had one HIV testing center in the state run by Planned Parenthood, which Mike Pence then defunded, so they couldn’t do the HIV screening anymore, and the rate of HIV increased again. So Mike Pence, because of his religious fundamentalism, helped spread HIV all through the state of Indiana. Totally preventable and totally the result of his policies. Let’s also not forget, as Buzzfeed pointed out, that in the year 2000 Mike Pence wrote an op-ed where he claimed that smoking doesn’t actually kill people. Smoking’s just fine and good. It doesn’t actually kill people, folks, according to Mike Pence. He is a climate change denier. So he doesn’t believe in science there. Doesn’t obviously believe in the science that says, smoking’s gonna kill ya. He also doesn’t believe in the science that says that condoms are effective, and we’re supposed to trust him to deal with one of the biggest viral outbreaks that we have seen in recent years?

Yeah, I’m sorry, but that’s not going to help me sleep any easier at night. That’s not going to help me not be worried about my kids when I drop them off to their 1000 child packed elementary school. This is so bad, folks, but this is what happens when you get a moron sitting in the White House, which is exactly what we have, and unfortunately we have apparently, an even bigger moron sitting in the vice president mansion who is now in charge of protecting us from this deadly virus. This is almost as bad a move as when Donald Trump put Kellyanne Conway in charge of the opioid response, which obviously hasn’t gone very well. Donald Trump is not good at picking people to run things and so far every person he’s picked, it’s only led to disaster.

Let’s hope, let’s hope that maybe that’s not where this is headed, but to be honest, I have another theory about this. Perhaps it is that Donald Trump has put Mike Pence in charge of this because he knows that this is a Herculean task that can never be accomplished. There is no way Mike Pence is going to prevail on this, but by appointing Pence, he’s already shifted all the blame on whatever happens now to Mike Pence. So when Pence inevitably fails, it gives Donald Trump the needed clearance to say, well, listen, we got an election coming up, man, you really screwed the pooch on Coronavirus. I’m gonna have to replace you on the ballot. Maybe I’m going to pick Nikki Haley, maybe try to get some of those suburban white woman voters, which Donald Trump desperately needs and is losing tremendously. That could be part of this if Trump thinks that far ahead, or he may just say, you know what, I don’t feel I dealing with this virus, Mike, now’s your time to shine.