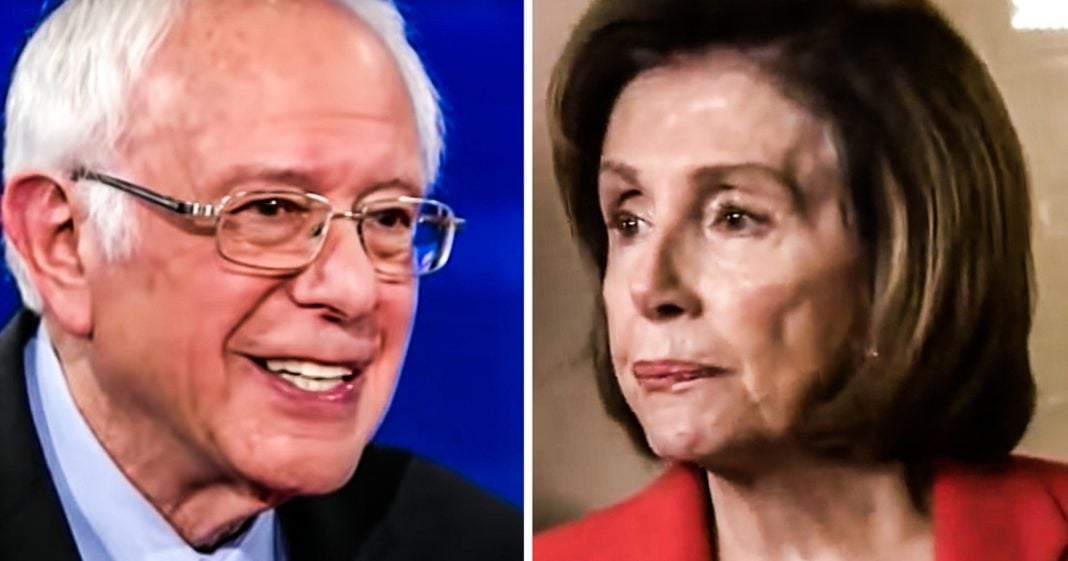 Nancy Pelosi sought to ease some fears of establishment Democrats this week by saying that she is comfortable with Bernie Sanders being at the top of the ticket if he wins the primaries. The talk recently among establishment folks is that Bernie will hurt down-ballot races, though there is currently no shred of data that supports that argument. Ring of Fire’s Farron Cousins discusses this.

Yesterday while she was leaving a closed door meeting in the House of Representatives, reporters went up to Nancy Pelosi and asked her if she would be comfortable with Bernie Sanders being at the top of the Democratic ticket and there was a good reason that reporters would want to ask this question. For the last week or so, we have seen lots of attacks coming from the, I guess establishment side, saying that Bernie Sanders is categorically going to destroy down ballot races if we put him on the top of the ticket. Now, bear in mind, there is absolutely no data whatsoever to support this claim, but we have seen it from all kinds of blue check marks on Twitter who described themselves as political consultants, MSNBC contributors, yada, yada, yada. I advised this person, but oops, they lost. But trust me, I’m totally right about this one. Anyway, so reporters went up to Pelosi and said, hey, okay, obviously this is going around or are you concerned about this? Are you comfortable with Bernie Sanders being at the top of the ticket? And Nancy Pelosi gave you a one word answer. Yes.

Are you comfortable with Bernie Sanders being at the top of the ticket? And Nancy Pelosi said, yes. So reporters then later in the day found Chuck Schumer and they said, hey, Chuck, same question. You okay with this? And Chuck Schumer also said, yeah. In fact, Chuck actually went a little further than just the one word response. He said, yeah, I’m comfortable with any of these people. We’ve got great people running. I think all of them will beat Donald Trump. I haven’t supported anybody. I’m not going to until we know who the nominee is, but I’m cool with all of them bye. Okay, so is that going to kinda calm the fears of all these establishment types when you have the two leaders of the Democratic party, the House and the Senate who come out and say, yeah, I’m fine with this guys, and they should be fine with it. Because as I mentioned, there’s no data out there that says that Bernie Sanders is going to hurt down ballot races. I mean, think about Hillary Clinton for a second, okay. Hillary Clinton was the establishment choice. All the superdelegates already backed her back in 2015, okay.

Can we stop pretending like there’s some kind of conventional wisdom that can accurately predict how the top of the ticket is going to perform because there’s not folks. There is no more conventional wisdom about anything. Even the polling data is not always accurate as 2016 also proved to us. The leaders in the Democratic party right now, at least the elected leaders who are actually serving constituents, they’re okay with Bernie Sanders being at the top of the ticket. So I encourage all of those blue check marks on Twitter who are still freaking out and making up these insane lies that Bernie is somehow gonna hurt down ballot races, you need to get in line with your party because they’re okay with Bernie being the front runner. So you should be too.