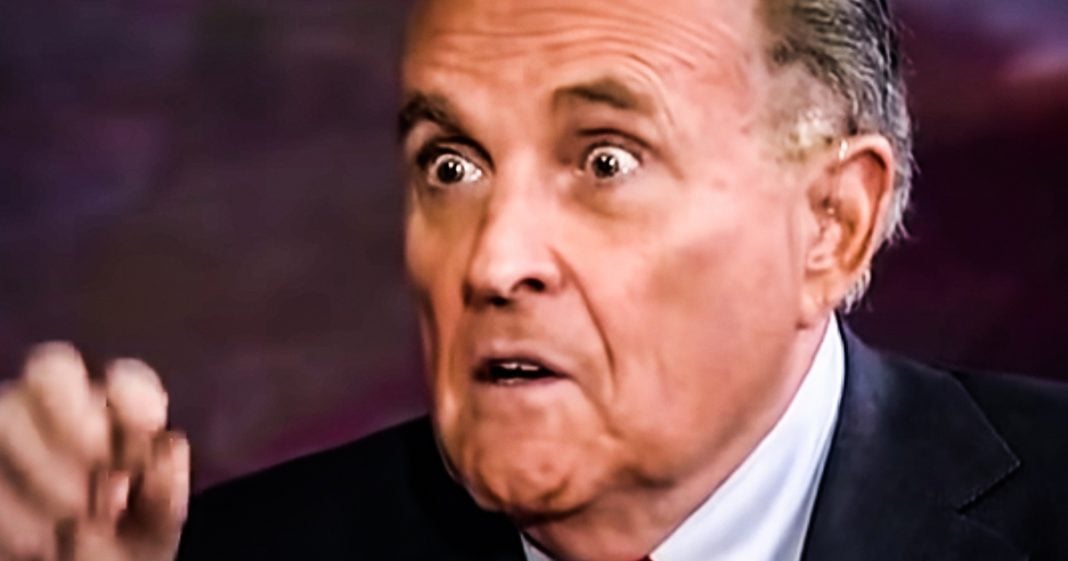 Rudy Giuliani might be sadder than we realize. Following an interview with a New York Daily News reporter, Giuliani apparently forgot to hang up his phone and the reporter heard him talking to someone about the fact that he only has like 5 friends left in the world. Poor Rudy, maybe he shouldn’t have become a crackpot conspiracy theorist working for a criminal administration? Ring of Fire’s Farron Cousins discusses this.

Earlier this week, Rudy Giuliani was contacted by a reporter from the New York Daily News. They wanted a quote from Giuliani because former New York governor George Pataki has written a new book and he says in the book that Giuliani contacted me shortly after 9/11 and asked me to suspend the mayoral race for that year so that Giuliani could keep serving as mayor and deal with the whole 9/11 thing. So reporters from the New York Daily News called up Giuliani and said, hey, here’s the claim. What’s your response to this? Giuliani said, you know, this never happened. Blah, blah, blah, it’s a lie. This is not what I had wanted, you know, and maybe it was one of my aides who said this, but I never pursued it. Nothing happened, blah, blah, blah. I’ve got to go. I’ve got to go. I’m on a plane to LA, I’ve got to go, is essentially how he ended that phone call, except Giuliani forgot one very important thing. He didn’t hang up the phone.

So Giuliani thinks he’s off the phone call, puts it in his little pocket, and then he turns to the person next to him that he’s traveling with or allegedly traveling with a person by the name only of Tony. All we know is that this person’s name is Tony because again, Giuliani forgot to hang up his phone and starts talking to Tony about the phone call. He says about Pataki, he says, he’s trying to sell a book. Even if we, if we would have had that conversation, it would have been privilege between a mayor and a governor. He’s an honorable guy. I can’t believe he would do that. I just keep getting disappointed. I got about five friends left. So Giuliani not knowing, he’s still on the phone with a reporter talking to his friend Tony, whoever the heck that is, I got about five friends left.

That’s really sad. That’s really sad for poor little Rudy, he’s only got like five friends left. But here’s the thing, Rudy, that’s not their fault. It’s not because you’re just some sad, misunderstood guy. You’re a horrible person and you have made sure that the whole world knows that you’re a horrible person, so I’m sorry, but I’m not going to feel sorry for you for only having about five friends left. Right? You’re out there traveling the world trying to pitch conspiracy theories about Ukraine. You are working for one of the most corrupt administrations we have seen, at least in my lifetime, and now you’re sad that you don’t have any friends. You’re also, by the way, under criminal investigation in the state of New York. So yeah, not surprising that you only got about five friends left and I wish that were the end of the story, but it’s not because according to the New York Daily News, Giuliani called them back about 15 minutes later and he said the same thing that he said the first time about the conversation with Pataki and the reporter was left wondering, and actually assumed at that point, that Giuliani didn’t actually know that they had already spoken about it.

That’s what was so confusing for the reporter, not just the overhearing, I got no friends, but getting a call 15 minutes later of Giuliani acting like they hadn’t already talked and said the same thing. Giuliani is a sad individual, but he’s a sad individual by his own making. Now, if there is some kind of dementia happening with Rudy Giuliani, then yeah, that is sad and that is something that does need to be taken care of for him and based on what this reporter is saying with this exchange, it may actually be something like that. So Rudy, I know you only got five friends, but for the next few seconds I’m going to act like one of your friends and I’m going to tell you, you need to go get checked out. Okay? Because your behavior is not normal, you are exhibiting symptoms and it would be within your own benefit to go see a doctor and make sure everything up here is still working properly. Now, that’s my advice, not going to pretend to be your friend anymore. You deserve what’s happening to you with regards of all of the conspiracy theories, criminal work, and criminal investigation that you’re currently experiencing.