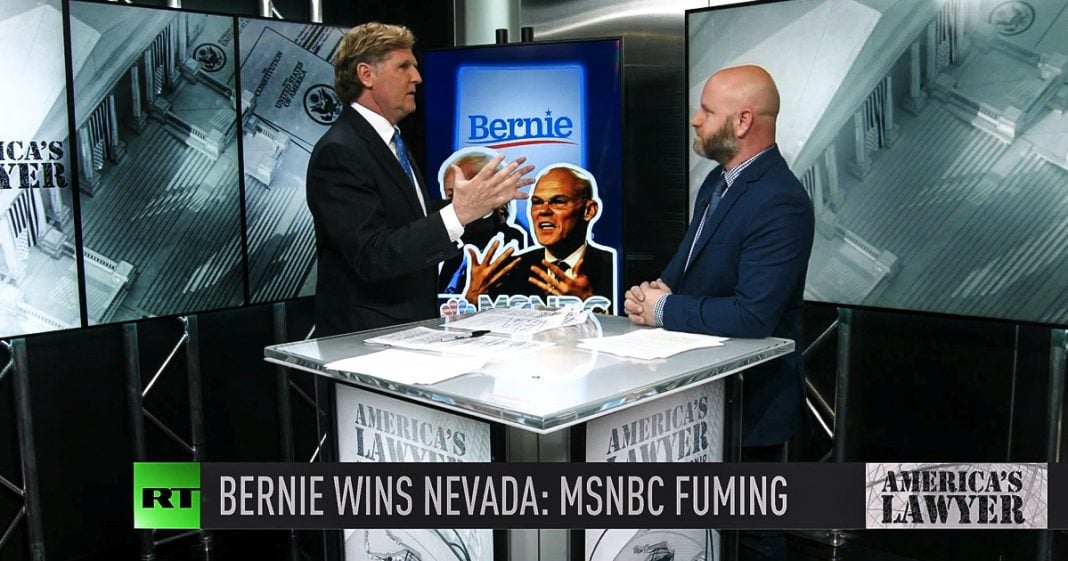 Via America’s Lawyer: Bernie’s win in the Nevada caucus left MSNBC’s Chris Matthews and James Carville FUMING, going so far as to compare the Vermont Senator’s victory to that of a Nazi invasion while once again pointing the finger at Russian meddling for ‘puppeteering’ Bernie toward the Democratic nomination. Mike Papantonio and Farron Cousins discuss.

Mike Papantonio:             MSNBC’s hosts and guests have a full blown meltdown, I mean, constantly about Bernie Sanders. It’s, this weekend was crazy.

Mike Papantonio:             It’s like all, they gathered up all the flying monkeys on cable vision, CNN, MSNBC, and just let them go. I look at this as I’m looking at this, these, these stories I’m thinking about James Carville comes to my mind. Okay, James Carville understand is the guy who said Hillary’s gonna win by a landslide. Set it up to the day before the election. He, you know, he sells himself as having this real contact with what’s happening in America. He is, it’s a fraud. It’s the biggest fraud I’ve ever seen in my life. He is so disconnected and, and then, and then the other wonk is, is Chris Matthews who is regarded, he is, this is not my words, these are the words of a couple of sites that have followed his career and just went back and tallied how often is he wrong. He’s the wrongest man on cable television. If he says it, you can count that it’s not going to work out like Chris Matthew says. What’s your take on this story?

Farron Cousins:                  I think the pundit class right now is freaking out because this is a continuation of their collective freak out from 2016 when everything they predicted about Hillary Clinton was wrong. Everything they predicted about Donald Trump was wrong. And they have consistently gotten it wrong ever since then and part of the reason that we see that is because people like James Carville, they’ve actually done stories about how wonderful and opulent this massive mansion is that he owns. He has made millions of dollars convincing people as a political consultant that he knows best. And when you go back and you look at his history, it turns out, well, you’re really not as good as it looks on paper because Bill Clinton, who Carville and Begala ran the campaign, Clinton only won both of his elections because Ross Perot siphoned off enough of the vote from the Republicans to put Bill Clinton in office.

Mike Papantonio:             We got Begala, you know, but okay, here’s the point. The hysteria continues, right? They move from China hysteria, if you’re a Democrat, you move from China hysteria, all of our problems. Russia hysteria, Iran, Iranian hysteria, and so right now I’m looking down the quotes about the Russian hysteria. Here’s Rahm Emanuel. Putin and Trump are picking their opponent. Why does he say that? Because he knows that after the first crazy talk about Russia, this is the best talking point they’ve got. James Carville right now, let’s see, right now it’s about 1:15 in Moscow. This thing is going very well for Vladimir Putin. They know his followers, you know his base which is disappearing, by the way.

Mike Papantonio:             The Democratic base is disappearing. They will do all they can to make sure Bernie Sanders is not there in, in the general election. I mean, it’s going a little overboard right now I think to where even the people that have been watching them, you know, I’m thinking, I don’t think so.

Farron Cousins:                  You know, you want to blame them for all of the evils that happen in this country or all the bad things that happen to your party when you refuse to look at yourself and say, you know what, maybe somewhere along the way, me, Chris Matthews or me, James Carville, maybe I screwed up. Maybe I lost touch with the country itself, living in my ivory tower and so geez, that’s why I’ve been wrong for eight straight years because I don’t get it.

Farron Cousins:                  Oh, he’s absolutely created a political revolution in this country. He’s 100%, you know, funded by average American citizens and he is raising more money than everybody else. Bernie Sanders has destroyed all of the norms and that’s another thing that drives them crazy.

Farron Cousins:                  Because what we’ve seen, everything they predicted about Bernie Sanders, well, he’s not going to raise money if he can’t have it from corporations. False. Oh well, he’s going to absolutely get destroyed by Trump. He’s beating him in every poll. Oh, he’s not gonna make it past Iowa. He’s won the popular vote in every state so far and is poised to take California and Texas and more on Super Tuesday and get this thing in the bag in just a week and a half.

Mike Papantonio:             Okay. Let me, let me move to another topic on this. This topic, Chris Matthews, if I have to hear an MSNBC or CNN talking idiot, use the Nazi Germany kind of equivalent again. I think, you know, what, what it is, they take these retread recycle almost naive talking points that are always wrong and now we’re seeing them time after time. They’re all on the same sheet of music. It’s almost like they get this, they get the morning memo. Talk about Russia and Bernie. Talk about the Nazi Germany and Bernie. It’s almost like this sophomoric, it’s, it’s sophomoric. It’s naive and the truth of the matter is they can’t really attack him any way else, can they?

Farron Cousins:                  No, they can’t attack him on substance. His policies are hugely popular, including among Republicans and certainly among moderates. So they make things up. They’re making up this, oh well, you know, Russia, Russia is behind his, his surge here.

Mike Papantonio:             Or Nazi Germany, invasion of France. What, Chris Matthews has lost it. He has totally lost it.

Farron Cousins:                  Well that’s right. I mean, this comment alone, if, if a Fox news pundit had done this, every single person on the left would immediately be calling for their firing. There would be advertiser boy, boycotts. Advertisers would pull out. Here we are, MSNBC deathly silent about Chris Matthews, who clearly should be fired because sadly, this isn’t the first time he’s compared him to Nazis.

Mike Papantonio:             African American can never win. Conventional wisdom was impossible, and now we’re hearing these same idiots say the same thing about Bernie Sanders because he really is in effect creating somewhat of a new political revolution.

Farron Cousins:                  He has, and they’ve lived in the bubble for so long though, that they have lost touch. They don’t see what’s actually happening in this country. The UN put out a phenomenal report about a week ago talking about how inequality in any society has the potential to destabilize that democracy. Well, that’s what’s been happening out here. That’s why the conventional wisdom doesn’t work anymore because people, the average working citizens, are tired of it. They want something different, so they’ve thrown people like Carville out on their head.

Mike Papantonio:             Because we’re trying to talk intelligently about the candidates. Thank you for joining me. Okay.