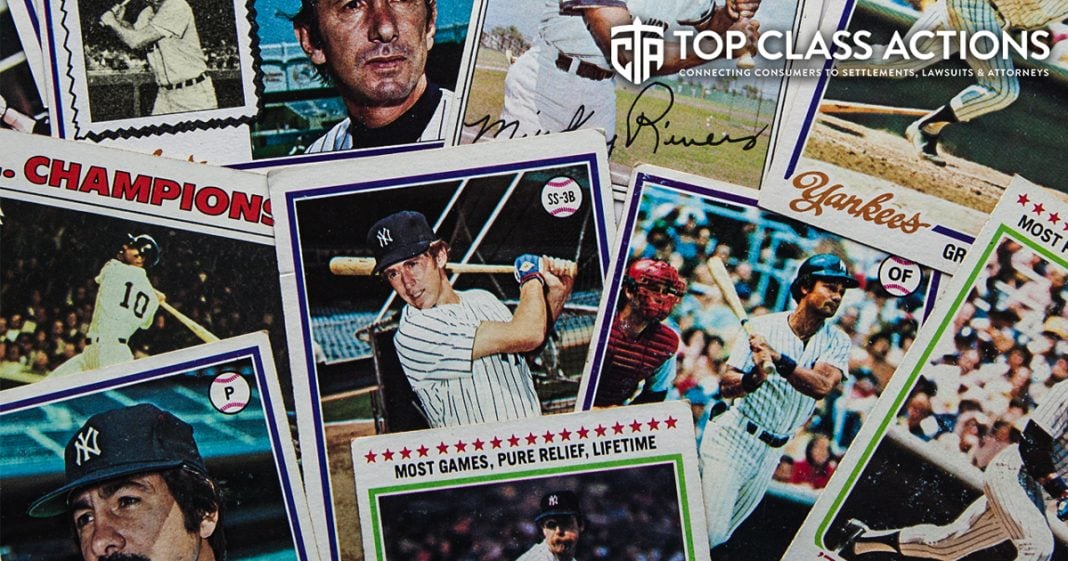 Professional Sports Authenticator (PSA) has been hit with a class action lawsuit by a baseball card collector who claims that the appraisal company knowingly graded altered cards and sold them at auctions. Plaintiff Eric Savoy, a baseball card collector says that he has sent his own baseball cards to PSA for grading and has bought graded cards from the company. In fact, he believes that he has purchased at least one graded card despite the fact that it was altered. Ring of Fire’s Farron Cousins discusses this with Scott Hardy, the President of Top Class Actions.

Farron Cousins:                  Anyone who’s ever collected baseball cards really at any point in their life understands that you’ve gotta take care of those things because someday they could be worth a ton of money. I know my baseball card collection from when I was little, my parents always told me that take care of them, put them in the plastic, keep them in the little wrappers. Do not mess with them because someday they could be worth a lot of money and a lot of people have the same thought too and that’s why you have agencies out there that will rate the cards and help you sell them based on that rating. But according to a new class action lawsuit, one of these rating agencies might actually be fudging the numbers a bit to pull in more money.

Joining me now to explain what’s happening is Scott Hardy with Top Class Actions and Scott, this is again as usual, little disappointing. You know I was an avid baseball card collector in my youth. Haven’t looked at my collection in years, but I know it is safe somewhere. And, and now we’ve got one of these groups for people who like me eventually wanted to go out and say I want to sell these, these, these are worth some money. I have no use for them. Let’s see what we can get. So tell us what’s happening with this, with this group here.

Scott Hardy:                          Sure. So it is a very interesting case. I like you, collected cards as a kid and like you, I still have boxes of cards and comics because I’m a huge nerd in storage, air conditioned storage, just sitting there all boxed and bagged and then the cards are, you know, nicely in their protectors waiting for this 20 years from now when, 30 years from now maybe, when we can go, man, those have all been worth a fortune. Let’s go ahead and get those valued. Well as you mentioned, we have PSA. PSA is one of the premier graders of collector’s cards and you know, they’re well-respected. If you ever watch Pawn Stars, the PSA guys come on that and talk about these collectibles that are out there. So what you do is you send your baseball cards to PSA, PSA grades it, they, they put it in a plastic case, they wrap it in a little seal, and that’s going to have a huge impact on what your card is valued.

Well, PSA will grade that card from one to 10, but if that card has been altered, meaning that someone has potentially doctored that card, they won’t give it a grading, they won’t give it that number value, which greatly diminishes the value of the card. And so what this class action is alleging is that PSA was working with some of these large scale collectors that send in a bunch of cards at a time to have them graded and taking a card that was graded as near mint to mint. And I’ve got some wonderful little examples here. Now when we say an unaltered card, it’s very, very small and we are going to have links of these in the video here, but it’s very, very small. They’re just tiny little blemishes that you would see on this Stan Musial card and this is really the one that started this whole discussion.

You know, there’s a little, there’s a little black blemish right on the card, right there. There’s a little blemish right on his sleeve. Another little black blemish, just, you know, these are pinpricks that are on the hand. Well when, with those blemishes, this card rated as nine, near mint sold for $2,800. Well, shortly thereafter, about a year after, we see that that same card, according to this class action was touched up by one of the old card doctors. Went back to PSA because what they did is they took the card out of that $2,800 card, they popped it out of that PSA package, did their little doctoring work on it, sent it back to PSA to be graded and PSA graded that as mint and that same card sold for $28,000.

So it went from $2,800 to $28,000 after being doctored, going back to PSA. PSA did not notice that it was doctored and put their seal on it and therefore sold it. So this class action is saying that PSA is being incentivized to continue to grade cards, to not call out they’re alter, call out that they’re altered and that they’re taking part of these profits because PSA also works with the auction houses.

Farron Cousins:                  So PSA gets a cut of what they sell here and so according to what you just said, they are incentivized. So if, if they say, well it’s really near mint, but you know, we give it a better grade, it’s going to pull in, as you just pointed out, a heck of a lot more money. I mean, you know, 10 times more money for the mint versus the near mint. So yes, it is in their best interest if they overlook the fact that this may have been altered and this is a group that can tell the difference. I mean, that’s part of what they do is be able to tell if something has been changed or altered and they are clearly falling down on the job. You know, it’s going to be up to, I guess the, the lawsuit to figure out if it’s just pure negligence or intentional negligence on their part to let these altered cards go through and receive these high ratings.

Scott Hardy:                          Exactly, I mean, because you’ve got these folks that went through and looked at a lot of these cards that were auctioned off and for the Stan Musial card, they said, we know it’s the same card because they actually turned it, turned around the back. And so they had the original auction at $2,800 and they found all these imperfections on the back. And then when that card went, went to auction and sold for $28,000, all of those same, about 10 different imperfections were on the back of the card, which helps prove that it was the same card that was, was sold. Now the sleuths that have dug this information up have found that more than $1.4 million of these cards have been sold.

So there’s been a lot of money that has changed hands out there and that, you know, I really am curious about PSA’s response because PSA is one of the most well-respected card graders out there and, you know, if they’re not either able to tell that these cards were doctored or, you know, what actually happened because that’s huge. And I know the law firm, one of the law firms that’s handling this on the plaintiff’s side, Bradley/Grombacher. Bradley/Grombacher are experienced trial attorneys and so they don’t go after these cases. If they don’t think that they’ve got a really good chance. They’re not out there just sending out letters saying, hey bow to our wishes or, or we’re going to sue you. No, these are hardened trial lawyers that go out and make sure that that case has a real strong footing and then proceed with it.

Farron Cousins:                  You know, it is interesting because this is kind of one of those cases where even if PSA wins and it shows that, oh they weren’t necessarily doing this intentionally, they still end up looking bad because that means okay, you were just super negligent here and you really screwed up. So I, there’s really no way for this group to come out of this case looking okay because either they definitely did something wrong or they just weren’t paying enough attention and still did something wrong.

So this is going to be very interesting to see how this plays out and as always, if you need more information about this case, follow the link in the description of this video. Head on over to Top Class Actions and if you haven’t already done so, I encourage everyone to subscribe to their weekly newsletter. Scott Hardy with Top Class Actions, always a pleasure talking to you. Thank you.