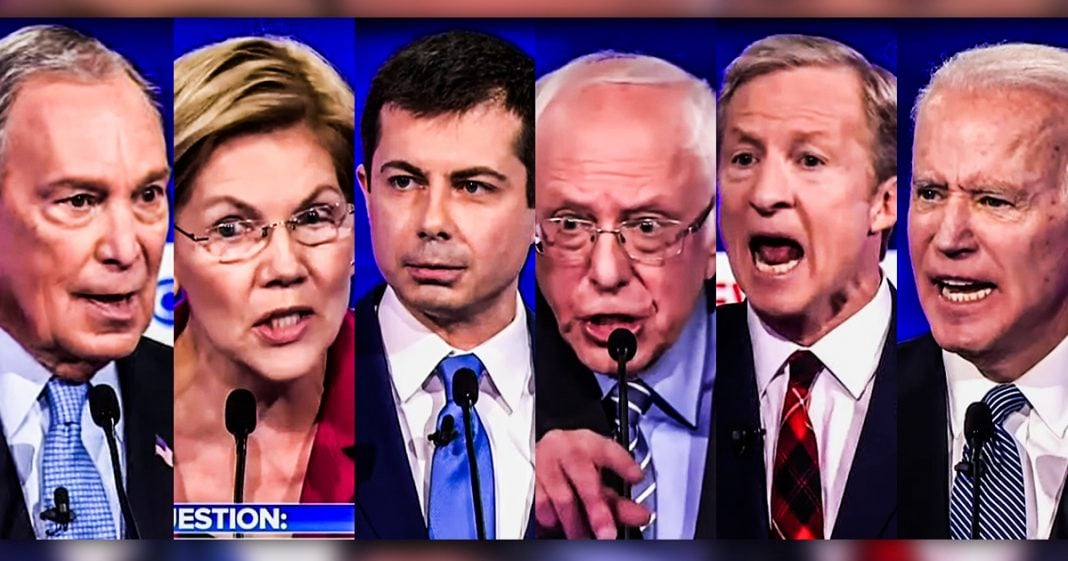 If it seemed like Tuesday night’s debate audience was a little hostile to certain candidates, that’s because it was. The debate audience was packed with the wealthy elite and high-dollar donors, with tickets ranging from $1,700 to more than $3,000. Average Americans were shut out of the debate, allowing the wealthy to make their voices heard to those on stage. Ring of Fire’s Farron Cousins explains the impact this had on the debate.

So last night was the final Democratic debate before Saturday’s South Carolina primary, and if things seemed a little odd during that debate last night, which a lot of people pointed out on social media, it’s because it was. What we saw last night kind of ran contrary to what we had seen in previous debates. Now previously when you talked about big, bold ideas, progressive ideas, Medicare For All, debt free college, you know, universal childcare, those topics were met with wild applause. Whereas the ones saying that things like this just aren’t possible would get booed. Last night, kind of flipped. People like Bloomberg were getting wild applause, Buttigieg wild applause for telling us all the things we can’t do, all the goals that we should just get rid of. Whereas Bernie and Elizabeth Warren, any time they’d attack one of these two people were roundly booed and people started wondering what the heck is going on here?

And then the truth came out about halfway through the debate, turns out that audience was in fact rigged, essentially, by the DNC and CBS and the state Democratic parties because they decided to charge anywhere between $1,750 and $3,200 for tickets just to walk through the door. So that audience was packed with the wealthy elite, high dollar Democratic donors, people who could afford to go sit in that auditorium for two hours of their lives for about $2,000. Average working class Americans, not only could they not afford that, but even if they could, they probably wouldn’t do that because it doesn’t serve a purpose. So yeah, no wonder the wealthy people in that audience weren’t thrilled about the ideas of being taxed more, and they wanted to hear from the candidates who aren’t going to touch their personal wealth or really do anything to change the direction of this country.

The DNC does this on purpose. This is not the first debate where this has happened and it certainly won’t be the last, but that explains why we saw a lot of the reactions we did from that audience, and here’s the problem with it. People watching it on TV, the average people out there watching it on TV who weren’t following it on social media too, they don’t know this truth yet. They don’t know that that audience was packed, that this whole thing was rigged against the progressive’s. All they saw was, wow, people don’t like Bernie Sanders. Oh, people do like Mike Bloomberg and Joe Biden, interesting. Maybe I, average work-a-day voter, is wrong about these people. That’s what that does. It gives the perception that Bernie is not popular and Michael Bloomberg is, so that’s the harm there. That’s the danger of that. If this was just a closed door debate and nobody could watch it on TV, it wouldn’t matter.

You can charge $10,000 for a ticket for all they care. The wealthy elite would pay it because they’re stupid sometimes with money. But this was unfair. This was rigged and this isn’t a fringe group reporting on this, right folks? This, this isn’t just crazy liberal bloggers out there making these accusations. The story that I’m reading from right now, is from the New York Times. The New York Times also talked about this. This is mainstream now, the public is going to understand this. They cannot hide this anymore and they’re going to face a lot of questions and probably a lot of backlash for this. As for the debate performance itself, it was a train wreck. You had candidates just screaming and shouting and yelling over each other, other. Joe Biden sitting there, you know, yelling at them because they said his time was up, even though in fairness to Joe, it, it definitely wasn’t.

Then they let other candidates go way past the time limit. Didn’t let people respond always when they were the ones called out. Sometimes they’d call on somebody else and then the other person, my God, it was awful. It was horrid to watch. Now what struck me as odd was that Bernie Sanders obviously and predictably took a lot of fire. That wasn’t the odd part. The odd part was that even with the boos for Bernie Sanders, even with the constant attacks on him, the post-debate polls showed that he won. Now, this was not even close to being Bernie’s best campaign or debate performance, excuse me, and I personally don’t think he emerged as the winner. I don’t think anybody emerged as the winner of that debate, but apparently people watching it agreed. So Bernie Sanders goes into this debate as the front runner, walks out of this debate as the front runner. So all of these attacks, all of this shouting, even the rigged audience itself, didn’t even make a dent in Bernie Sanders’ campaign, and that’s how you know that he’s the real deal.