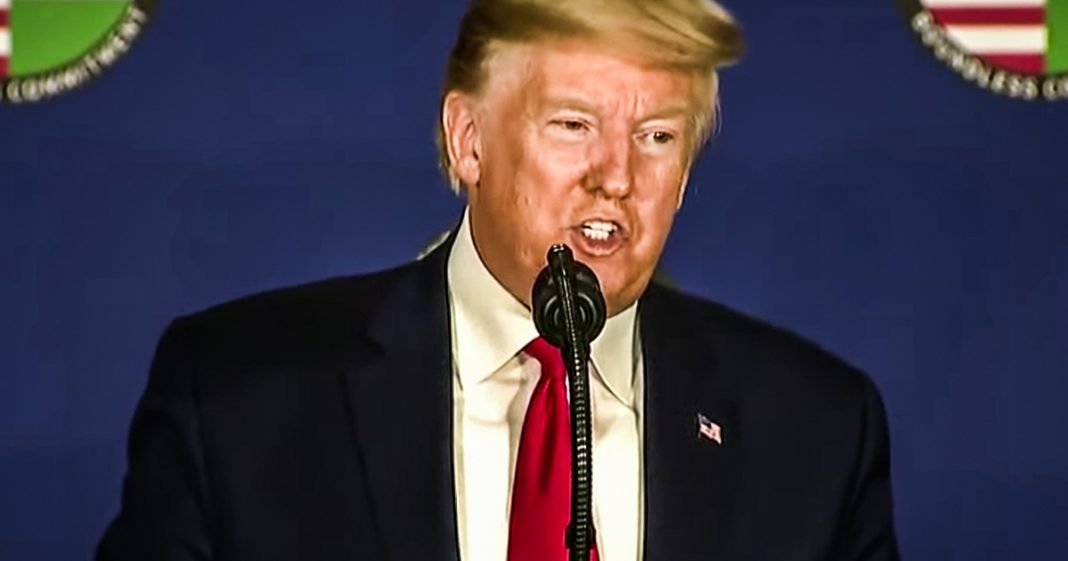 We finally learned what it will take for Republicans in the Senate to turn on Trump – he has to cost them money. And that’s exactly what has happened this week as the stock market has plunged 1900 points in the last two days. The main reason is because of fear of the spreading coronavirus, and Senate Republicans are taking the Trump administration to task for bungling the response and hiding the data, leading to the market crash. Ring of Fire’s Farron Cousins discusses this.

Well folks, we have finally figured out what it takes for Republicans in the Senate to turn on Donald Trump. And we found out over the last two days when the stock market dropped roughly 1900 points over fears of the Coronavirus. Here’s what happened. We had Republican senators and Democratic senators yesterday got briefed by the Trump administration about the severity of the Coronavirus. Trump had been basically lying to the public about it. In fact, when as far as to say, oh, we’ve almost got a vaccine for it before the administration came out and said, no, he didn’t mean that he was probably talking about Ebola, because I guess we’re working on that too, sure. But not Coronavirus. He was totally wrong. So as the Trump administration continues to both lie about it, get things wrong and do nothing about it, essentially, the stock market is tanked.

So you get the officials coming into the Senate briefing Republicans and Democrats about what’s happening, really not the Trump spin, but what’s really happening, and they freaked out. They freaked out because they believe that Donald Trump, this administration should be telling this information to the public, but not because they want to keep the public safe. No, it actually has more to do with that 1900 stock market point drop that I mentioned earlier and that is what Republicans are furious about. See, they have no problem with Donald Trump breaking the law. They have no problem with Donald Trump doing things that are clearly illegal or immoral. What they care about is their own pocket book and when that starts to become effected, then they get angry and that’s why they’re furious at Donald Trump right now. You had Kennedy from Louisiana, Romney from Utah speaking out accusing this administration of covering things up, of bungling the response and of not taking it very seriously and of course causing the stock market to drop.

Now, here’s the thing. The Trump administration is now asking Congress for $2.5 billion to help with their Coronavirus response here, but the problem is you’ve cut the budgets for the centers for disease control and health and human services. The two government agencies that are supposed to be working to prevent pandemics like this, so how can we trust you? How can we take you seriously? The answer is we can’t, and that’s why are very volatile stock market is freaking out right now. They know that this administration doesn’t have a plan. They know that they’re not going to be able to keep us safe because they also know that they have cut the budgets for these agencies. So the stock market’s probably going to continue to take a nosedive in the coming days just as it has the last two days and it’s because Trump is an idiot and the stock market is very fragile.

Okay. This is the same market that if Trump tweets more than 25 times a day starts to crash too. You know, it’s, it’s a made up construct. It’s something we just kind of created out of thin air and it’s still there. Like we rely on this thing as a good indicator about the economy when in reality it doesn’t even need to actually exist. It’s the weirdest thing imaginable, folks. But for some reason we have to hail it as if it’s some kind of God and that is exactly what Republicans in the Senate are doing. And they’re freaked out right now because they’re watching their money become worth less and less and it’s all because they decided to put a moron in the White House who they should have known, doesn’t know how to handle a crisis.