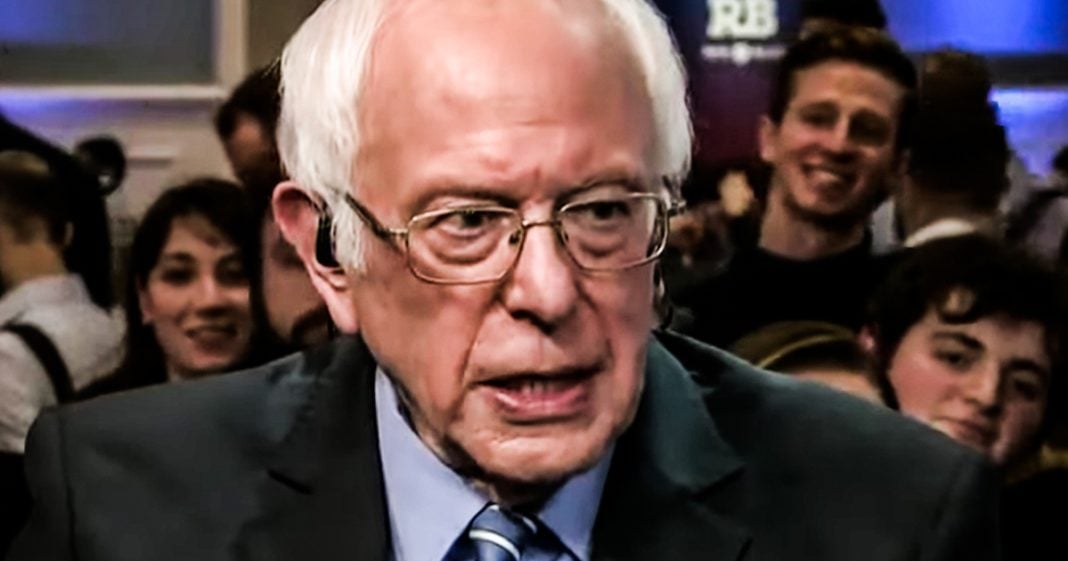 Two Democratic Party members in the state of Florida have sued the state to remove Bernie Sanders from the primary ballot. They claim that, because Florida has closed primaries and Bernie is not a Democrat, he shouldn’t be allowed to run as one in the state. There is no appeasing these people – they’d be whining even more profusely if Bernie launched a Third Party bid for President, which would virtually guarantee a 2nd term for Trump. Ring of Fire’s Farron Cousins discusses this.

Two Democrats in the state of Florida have filed a lawsuit against Bernie Sanders. The state Democratic party trying to get Bernie Sanders actually kicked off the Florida primary ballot. These two men, Frank Bach and George Brown are furious that Bernie Sanders, famously not a Democrat, is running as a Democrat in the state of Florida and they’re arguing in their court filing that they had to pay money for that because Florida has closed primaries and non Democrats cannot vote in the Democratic primary that this also means non Democrats can not run as a Democrat in this closed primary. Now see, here’s the thing, the state party gets to decide who goes on that ballot and that’s why they’re suing the state party along with the Sanders campaign. They kind of listed everybody in the lawsuit, it’s what they do. And they’re saying you can’t put him on there because he’s an independent. He’s just running as a Democrat because it’s convenient. Yeah, guys. But that’s kind of the issue, he is running as a Democrat, therefore would be eligible for the Democratic primary.

Now he is a registered voter in the state of Vermont. Sure. And in Vermont you do not register with the political party when you register to vote. So he is technically registered as no party, but that does not preclude him from getting on this ballot in Florida. This just shows you how desperate and weak and pathetic some of these never Bernie Democrats truly are. I mean, do these two men not understand that the polls right now show that Bernie Sanders is literally the only person running for president who has a chance at beating Donald Trump? Now those polls may change and they have changed, but not for Bernie, they’ve changed for everybody else who just a month ago showed them all beating Trump. Now only Bernie does, and Bernie has consistently done that. Bernie could even beat Donald Trump in Florida according to the latest, or excuse me, Texas, according to the latest polls, and these morons want to kick him off the ballot in Florida. 219 pledged delegates up for grabs and they don’t want Bernie Sanders to be that person. They hate him so much that they want to kick him off and risk handing this primary election over to somebody who will definitely lose to Donald Trump. Bernie beats Trump. Nobody else can say that right now.

So we need to stop with this, right? I mean, weren’t we just hearing it all a couple of weeks ago about unity. We all got to unite behind whoever gets the nomination and then you’ve got two boneheads like these guys down here in Florida saying, we want to kick him off the ballot. Shouldn’t we be a little more concerned about people like this who actually sue to kick off the ballot than a couple of Bernie supporters being angry and mean online? Which one do you think is more harmful to the Democratic party? A couple of mean people on Twitter or a couple of morons down in Florida suing the party itself to kick Bernie Sanders off the ballot? I’ll go ahead and give you the answer to that. It’s these two goons down in Florida that we need to be more concerned about because they’re the real problem. They don’t want change. They don’t like Trump, sure. But they just want things to just go back to the way they were. They don’t actually want to make it better. I’m assuming these guys’ lives, because they had the money to file this lawsuit, probably pretty decent. Right? These are probably people who aren’t struggling to get by and that’s why they don’t care. If I were these fellows, I’d probably go ahead and just de register as a Democrat and go ahead and switch that over to Republican because if they want to not care about everybody else, the Republican party is where they would fit in the best.