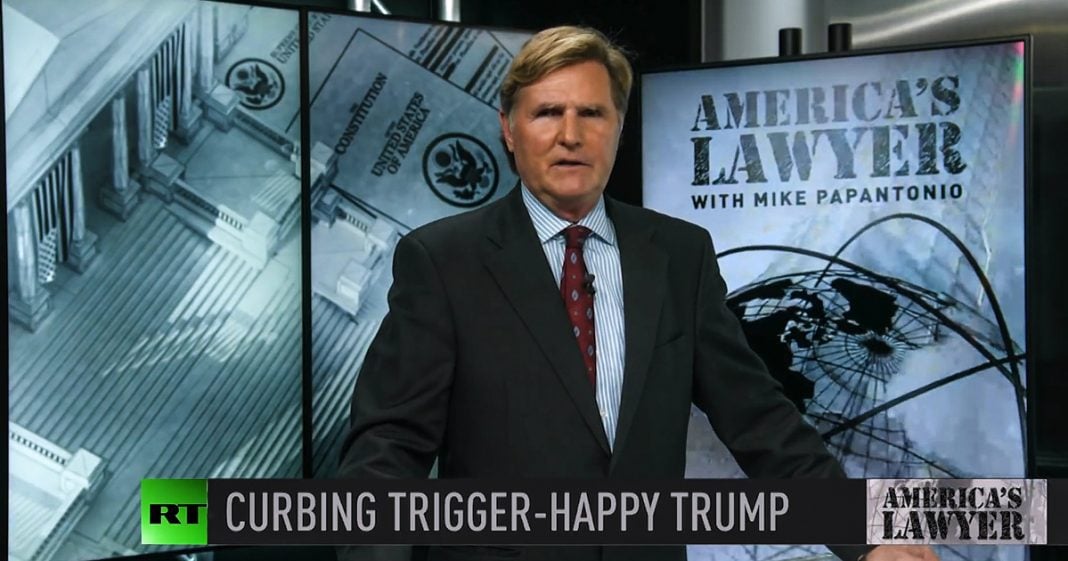 Via America’s Lawyer: Last week, both Democrats and Republicans in the Senate came together to limit the ability of the president to launch a strike against a foreign adversary by voting to pull back some parts of the 2002 authorize use of military force legislation. Mike Papantonio explains more.

Finally tonight, some good news. Last week, both Democrats and Republicans in the Senate came together to limit the ability of the president to launch a strike against a foreign adversary by voting to pull back some parts of the 2002 authorize use of military force legislation. Similar legislation was passed by bipartisan majority in the House earlier this year. Since 2002 presidents, Democrat and Republican Bush, Obama, Trump, they’ve used the AUMF as justification for military strikes that have injured more civilians all over the Middle East. In fact, reports tell us that as many as 90% of these strikes being carried out are killing innocent bystanders instead of the intended targets.

Both Democrats and Republicans are responsible here. Both Democrats and Republicans understood that the decision to launch a military operation requires thought, planning and debate. The 2002 bill took away thoughtful analysis and gave too much power to the executive branch that constitutionally should be part of what Congress decides. And even though the bill will be vetoed, no question, Congress needs to keep trying. If they don’t, we can look forward to a generation of presidents, both Republican and Democrats, launching revenge strikes across the globe without anybody looking over their shoulder. This isn’t about politics. This is about accountability and oversight.

That’s all for tonight, find us on Twitter and Facebook @facebook.com/rtamericaslawyer. You can watch all RT America programs on Direct TV, Channel 321 and also stream them live on YouTube and be sure to checkout RT’s new portable app. It’s fantastic. You can watch all of your favorite shows in any area that you want to watch. I’m Mike Papantonio, and this is America’s Lawyer, where every week we tell you the stories that corporate media is ordered not to tell because their advertisers won’t let them do that. Have a great night.