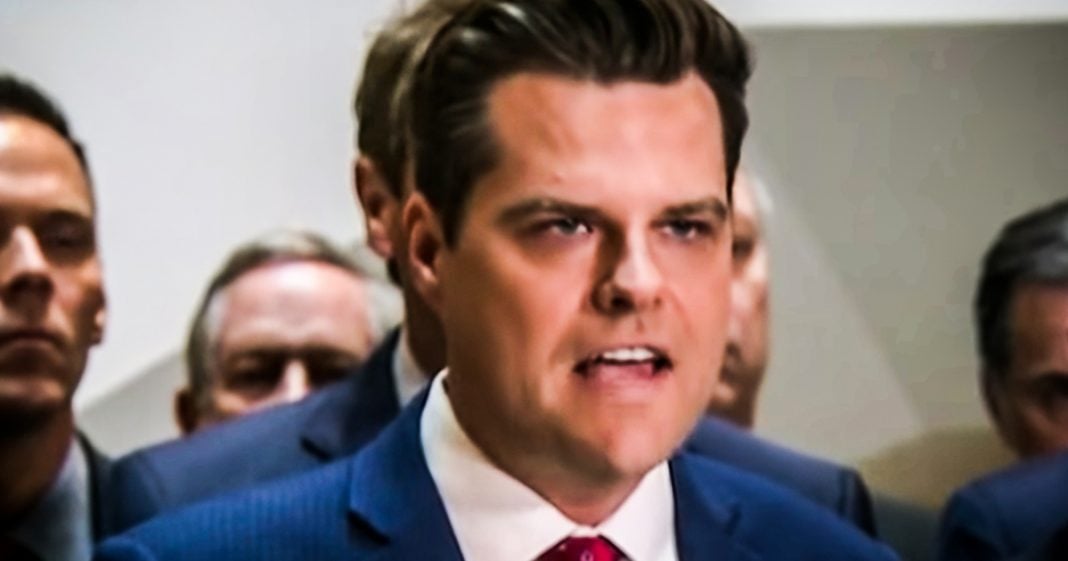 The Florida Bar has announced that they are launching ANOTHER investigation into Matt Gaetz’s behavior during the impeaching hearings in the House in October, when Gaetz made a spectacle by trying to storm the hearings and by using recording devices in areas where this is forbidden. Gaetz was trying to put on a show for the public, and now it could cost him his law license. Ring of Fire’s Farron Cousins explains what’s happening.

The Florida Bar has admitted that they have in fact begun an investigation into Republican representative Matt Gaetz. Three weeks ago, the Miami Dade Democratic Party sent a complaint to the Florida Bar over Matt Gaetz, little publicity stunt that he pulled during the House’s impeachment proceedings. You know, when they were doing those closed door meetings and if you weren’t on those committees, you weren’t allowed to be in there. Those were the rules. But Gaetz tried to make it seem like, oh my God, they’re shutting me out. I’m not allowed in. Bring your cameras, come on. I’m going to bring my cell phone into a secure area where that’s not allowed and I’m going to videotape and I’m going to barge into the room. All for the cameras. All for Donald Trump. And Matt Gaetz thought whoa boy I got ‘em, because he came back the next day with a gaggle of Republican morons and did the same thing. And sadly that wasn’t even the last time he did this. He did this repeatedly during those House hearings that he was not allowed to be in because he wasn’t on the committees. They were in the sensitive compartmented information facility and so the use of cell phones, any kind of video or audio recording at all, was explicitly forbidden.

And as the Miami Dade Democratic Party pointed out, because impeachment leads to a legal proceeding, the trial in the Senate, the Florida Bar does in fact have jurisdiction and can punish Matt Gaetz for his behavior there because it was a legal proceeding. And the Florida Bar decided, you know what, Miami Dade Democratic Party, you’re right and they have announced that they have opened a file on this and that they are investigating it. But unfortunately they can’t tell us any more than that because now it is an open investigation and they’re not allowed to comment on it. It’s also worth noting, this is not the first time that the Florida Bar has had to launch an investigation into Matt Gaetz. They also investigated his potential witness tampering of Michael Cohen before his testimony last year, an investigation that took several months but ultimately resulted in no punishment whatsoever for Matt Gaetz. This one might be a little different though because you could see how the witness tampering thing may not quite have been witness tampering.

It sure looked like it, but you could make the argument that it wasn’t. This on the other hand, there is no excuse for it. Gaetz knew the rules and intentionally broke them. He violated national security protocols by going into that secure area with recording devices. He knew that was against the law and he chose to do it anyway. Kind of like when he got the DUI, right? He knew that drinking and driving was against the law, but he did it anyway. But daddy got him off for that. They had the cop fired who pulled him over for DUI. Daddy can’t get you out of this one bud. This is going to be an investigation and you very easily and probably should lose your law license over it. But let’s not count our chickens before they hatch, right? We have gotten too excited about too many different investigations into too many different Republicans over the last few years only to have absolutely nothing happen as a result of it. So right now, let’s not speculate on the outcome. Let’s just be glad that the Florida Bar’s actually looking into it.