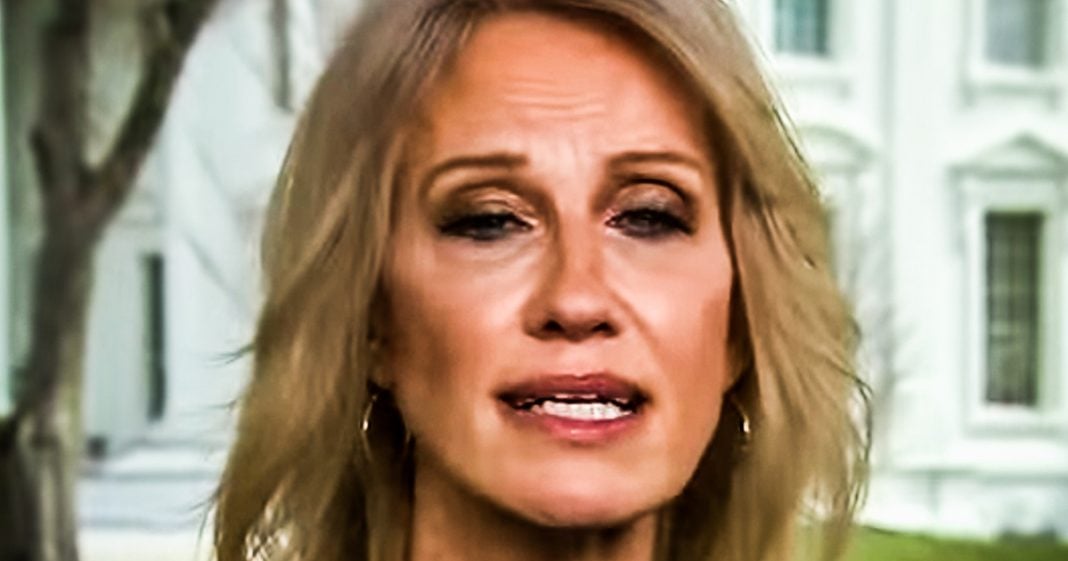 Reports have been swirling that Donald Trump had tasked Ginni Thomas, wife of Supreme Court Justice Clarence Thomas, to help compile a list of “disloyal” government employees so that Trump could find out who wasn’t completely on his side. On Fox News on Monday, Kellyanne Conway appeared to confirm the existence of the list, showing that this administration will not tolerate anyone who isn’t blindly loyal to Trump. Ring of Fire’s Farron Cousins discusses this.

Reports had been swirling for many days that Donald Trump is in fact putting together lists of government officials who are “disloyal” to the Trump administration. We found out yesterday that Ginni Thomas, the wife of Supreme Court justice Clarence Thomas, was kind of put in charge of this whole thing, and she rounded up a group of conservative activists to help her out. A little group, they’re calling Groundswell, and they’re out there making a list of people in the administration that are not loyal to Trump or who they think are not loyal to Trump. And she has also hand delivered a list of people who are loyal to Trump to him just a few days ago and said, these are people you need to hire. So we have the wife of a Supreme Court justice out there, handpicking Trump loyalists to serve in this administration while also doing a McCarthyite hunt through the administration to find anyone who doesn’t blindly love Donald Trump.

And then yesterday on Fox news, Kellyanne Conway appeared to confirm that this was in fact happening. Here’s what she said. We should not have people in government who are undermining the president’s agenda. The president got elected because his ideas prevailed. You want your views to become policy, you need to put your name on the ballot and you become president of the United States, Kellyanne Conway said in her tacit confirmation that this is actually happening. And here’s the kicker folks. This all came from Fox news. This is a Fox news story. Fox news actually did report on this on their website and told this story. Talked about Groundswell, talked about Ginni Thomas. Mentioned Kellyanne Conway because she was on their network earlier in the day because even Fox news is out there saying, yeah, this is a crazy thing that’s happening right now and they’re not going this far. But I think maybe this is time where we ought to start to worry a bit. Donald Trump is not well.

Surviving the impeachment trial in the Senate, which again was predictable, has given this man a renewed sense of invulnerability, invulnerability, excuse me. He thinks he can do anything. He thinks he’s going to get away with anything. He thinks no one can touch him and he wants to make dang sure that there is nobody left in that federal government that would ever question any decision he makes because after all, that’s what started the impeachment hearings to begin with. The whistleblower, right? The one that they’re still trying to out for all of us and attack publicly. They don’t want to run into a situation like that ever again. This isn’t just about Trump only wanting to be around people who love him. This is about Donald Trump knowing that he is going to do something illegal again in the future and he doesn’t want anybody in this administration to go out there and blow the whistle on him.

That’s why this is happening. Kellyanne Conway appears to agree with him. Ginni Thomas, wife of the Supreme Court justice, seems to agree with him and is actively helping him do this. But this just shows how dangerous this man is becoming. And if the federal government is purged of anybody who is not blindly loyal to Donald Trump, that is going to create problems for generations because eventually we’re going to have a new president in there. And do you think this new president’s going to go through and compile a list of people who aren’t loyal to them? Probably not. It’s probably not going to be very high on their agenda because they’re going to have to deal with all the damage Trump has done to the actual country first. So these people get to stay there. This is a threat. This is a danger and it’s all coming directly from Donald Trump.