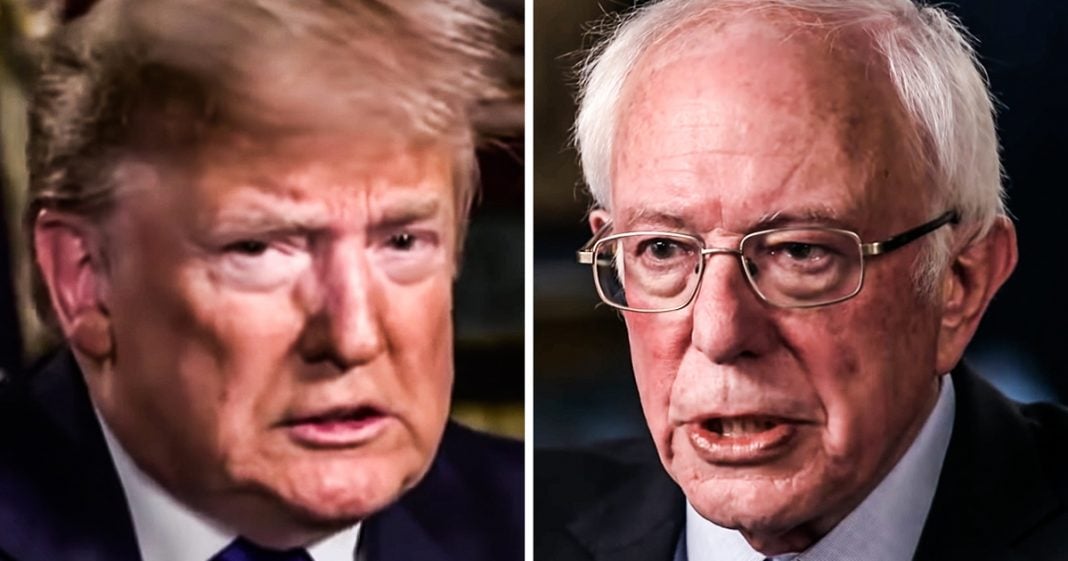 According to the latest round of polling, a plurality of Democratic voters believe that Bernie Sanders has the best chance of beating Trump in the 2020 election compared to all the other Democrats. This throws the “electability” argument out the window, and shows that when you stick to focusing on policy, people respond positively. Ring of Fire’s Farron Cousins discusses this.

According to the latest round of polling from Morning Console, Bernie Sanders is viewed by Democratic voters as the best person to beat Donald Trump in the 2020 presidential election. A plurality of Democratic voters because nobody hit the majority status, but Bernie had the most, he had the plurality, say that Bernie is absolutely the best choice if the choice is, who do we think can beat Donald Trump? One third of Democratic voting respondents picked Bernie Sanders as the one to best beat Trump. Now, shockingly, Bloomberg actually came in second and his numbers are going up, but a lot of that is due to name recognition for him being able to, you know, run these ads all over the country when other candidates cannot quite afford that. Biden came in third, all the others way down below. But Bernie’s number one.

He’s also now number one with African Americans here in the United States. He has officially overtaken Joe Biden in yet another poll showing that the majority of African Americans in this country support Bernie Sanders over Joe Biden. So he has eroded Joe Biden’s backbone of his campaign, the African American vote. He has destroyed the conventional wisdom, which was Bernie Sanders will never attract black voters and all of those establishment talking points of, well, if you want to lose to Trump, vote for Bernie. Guess what? The people who live outside the beltway, the people who don’t make their big money trying to tell us what will or won’t happen with campaigns, they disagree with you. They think Bernie Sanders does have the best chance. And guess what folks? The pundit class aren’t the ones who make the decisions, the voters are. So you can listen to these Democratic consultants, these high priced campaign advisors, all you want saying Bernie doesn’t have a chance, when it comes to the people who are actually going to be filling out most of the names on the ballots, they say Bernie Sanders.

Bernie has destroyed the conventional wisdom of the pundit class and they can’t stand it. That’s why they’re freaking out right now. But the average Democratic voter out there, they’re not freaking out. They don’t see this as a bad thing. They’ve seen the attacks on Bernie and they think, wow, these are, these are actually pretty weak. This is stupid stuff. I like the guy. I like his policies, and that’s the most important thing. They don’t care that, oh he yelled, oh Lord, that’s just awful. Oh, some of his followers are mean to people on Twitter, well so are the followers of everybody else, too. Here’s a little surprise for some of the folks out there. Most of the voters in this country aren’t even necessarily on Twitter. They don’t spend all day it. It’s not part of their daily routine. They may get on it every now and then and say, oh, what’s happening in the world? But that’s about it. Sorry to disappoint you, establishment. But those attacks have failed and the voters are proving you wrong. Voters of color, voters of Hispanic descent, and everybody who just thinks of themselves as just a regular average Democrat, no matter the color of their skin or their religion or their sexuality, they’re picking Bernie to win. So I think it’s time that the pundit class gets in line and stops attacking the Democratic front runner.