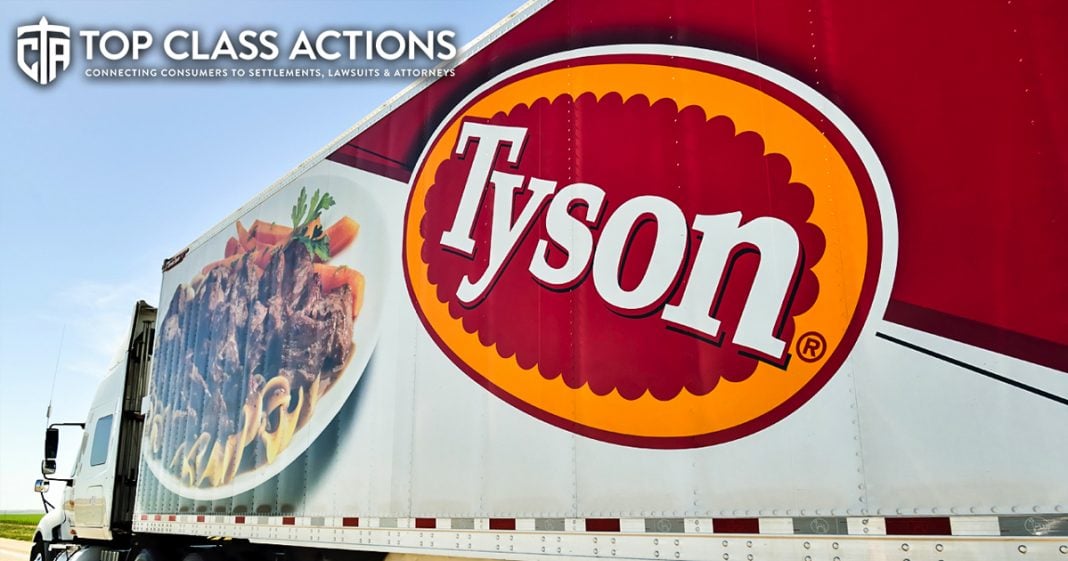 Tyson Foods Inc. has been hit with a class action lawsuit by a consumer who claims that the company labels their beef as a “Product of the U.S.” when, in fact, the meat is produced abroad. This is allegedly misleading, as the plaintiff argues that the meat has been imported into the U.S. after the animals have been slaughtered overseas. Ring of Fire’s Farron Cousins discusses this with Scott Hardy, President of Top Class Actions.

Farron Cousins:                  For decades now, corporations operating in the United States know that most American citizens like to buy made in the USA. So we have seen that made in the USA label slapped on all sorts of things from food products to TVs to appliances to automobiles. But as is often the case, things are not always what they seem and we’re finding out that some of these products that say made in the USA really are not at all even close to being made in the USA and that is the focus of a new class action lawsuit against Tyson Foods.

And I have Scott Hardy with Top Class Actions with me now to explain what’s happening and Scott, this isn’t necessarily building an automobile where you’ve got lots of different pieces involved. We’re talking about Tyson beef, it’s beef. Either your beef is from the United States or it’s not and according to the lawsuit, this beef that Tyson is selling is definitely not coming from the United States at all.

Scott Hardy:                          It’s not. I mean, according to the class action, you know, as you said, we trust Tyson Foods. We think, you know, Tyson’s an American company that they’re going to make sure that the cows and the beef that we’re eating are American. But according to this, they had a little sticker that says product of the US and so by saying product of the US that gets them, might get them around that little claim of actually having American cows that we’re eating. So it turns out a lot of these cows are coming from places like Brazil. And so they either, they’re actually putting these cows live onto these container ships and bringing them over here, the big cargo ships.

They also are slaughtering the cows in these other countries like Brazil and then putting that meat on these cargo ships and bringing them to the US and then they’re finishing, “finishing” them as they are butchering the meat, and that’s how they say this is a product of the US. They say, oh well, we got the meat here and then we went ahead and butchered it, and did our thing. So that makes it a product of the US. Unfortunately that cow, check for that cows birth certificate, that is not an American cow. Find it.

Farron Cousins:                  You know, that is interesting and we’ve seen this happen a lot in things you and I have discussed, a slight word change here and there absolutely changes the meaning of what the company is trying to convey. Product of USA, product indicates the whole final thing. Made in the USA would mean that we made all this here, this, this is from us, this is our beef, this is an American cow, God fearing cow and now it’s your, your dinner. But this says, oh, this is just a product of the USA. This thing we’re packaging and putting out, that’s the product. And sure we packaged it in the USA. Where did these cows come from? What’s their backstory?

Well, we don’t know. What were the regulations in the, you know, country where they were slaughtered for us? We’re hoping they’re okay because we’re selling it to you. So, you know, not necessarily having the FDA here involved in every step of it, but you know, it’s a product of the USA. So here you go eat your quasi American beef. That is basically what they’re telling us, according to this lawsuit.

Scott Hardy:                          Exactly, and, you know, and part of it is these cows might not be raised in a sustainable area that’s good for the environment. You know the Amazon Rainforest in Brazil is getting wiped out and they’re using that for farmland. So your cow that you’re might, you know, maybe eating could be on part of where the rainforest was, which is doubly hard on the environment. And so people want to know where that meat is that they’re eating is coming from and we want to support our American farmers out there. We want to know that those farmers in the Midwest that are working hard, those cattle farmers or, you know, even when I’m driving through Phoenix, there’s some cattle farms here. I want to make sure that I’m supporting these local businesses and that we aren’t shipping it in from outside the US.

Farron Cousins:                  There is a lot of, a lot of issues at play here with this particular lawsuit. You know, as you said, people want to support local farmers. They want to support American farmers. They want to know that their meat is ethically sourced. You know, that it’s not some big factory farm that you had to destroy, you know, half the rainforest to create. We want to be more conscious about things like that and we’re trying as a country, we really are. And so when we get these things like this and Tyson says, no, it’s a product of the USA, but the cows are coming from South America and these ecologically sensitive areas, that’s a big deal.

We’re also not supporting American companies throughout the supply chain. We’re only doing it with the final product, outsourcing the rest of it. There’s a lot of things happening here and, you know, hopefully this gets resolved because people need to know, especially when it comes to food, what you’re actually eating and where it’s coming from. I mean, that’s, that’s rule number one of food. Know what it is and where it came from and Tyson is robbing us of that ability.

Farron Cousins:                  For more information about this issue, follow the link in the description of this video. Head on over to Top Class Actions and make sure you sign up for their weekly newsletter to stay on top of things, including stories like this. Scott Hardy with Top Class Actions, thank you very much for talking with us today.