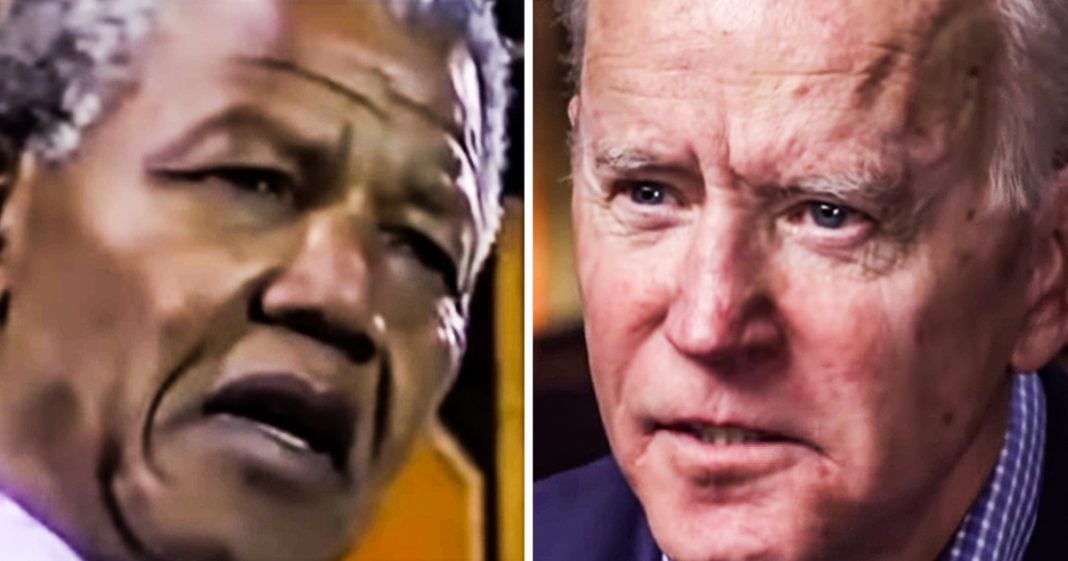 For several weeks, Joe Biden has been repeating a story about how and a UN ambassador were either arrested or detained while trying to visit Nelson Mandela in a South African prison many years ago. The only problem is that this story is completely false. Not only are there absolutely no records to back this up, but the UN ambassador that Biden was allegedly traveling with has said that this never happened. Ring of Fire’s Farron Cousins explains what’s happening.

For about the last two weeks, Joe Biden has been telling another Joe Biden story and that is that back in 1977 while traveling in South Africa to go visit the imprisoned Nelson Mandela, Biden says that he and the UN ambassador at the time were arrested while they were trying to go visit Nelson Mandela all the way back in 1977. Now, that’s a hell of a story, right? I mean, that is the kind of thing that if it actually had happened to somebody, they would probably talk about it a lot, especially if they’ve spent the last 43 years in politics, including three presidential runs. You would think at some point this story would have come up, right? But it didn’t until two weeks ago and he has now told this story in the last two weeks, multiple different times. Now, here’s the problem with this. News agencies all over the country, including New York Times, Washington Post and all the other big ones decided, okay, well, wow.

Yeah, this is a big thing. He was a Congress person at the time. This would have been in the news if he had been arrested or even detained in South Africa while trying to visit Nelson Mandela. So they went through all their archives, went through the archives of other newspapers and not a single mention of it, not one. So then they decided, okay, well he said he was with the UN ambassador. That guy is still alive. Let’s go ask him. And the UN ambassador, who by the way happens to be a Bloomberg supporter, Andrew Young, said that didn’t ever happen. Sorry. But no, in fact, I was the UN ambassador. I was, you know, well versed on who was being arrested, what American citizens were being arrested all over the world and I can actually tell you that none were arrested in South Africa. No member of Congress was arrested in South Africa during that time. Sorry, Joe. This simply isn’t true.

So by all possible accounts, including the man who Biden claimed was there by his side in that cell, this story is a complete lie. It is an absolute fabrication from Joe Biden. So here’s the question. We obviously know why he is telling this lie, right? He is telling this lie because he is plummeting with his African American’s support, which at one point was his stronghold. That was the thing that was going to propel him into the White House and it’s crumbling, leaving Biden and going over to Bernie Sanders and with South Carolina coming up on Saturday, he’s screwed if he doesn’t get it. I mean, polls show right now, it is now a neck and neck race in South Carolina, what was once a Biden stronghold, and Biden said that his path to victory absolutely through South Carolina with a very strong win. If he doesn’t get a strong win, if he pulls it off by one or two points or if he loses, that’s about it for Joe. He at that point has shown that he cannot carry a state with a demographic that was once strongly his, that support has eroded almost to the point of being completely deteriorated, Joe would be effectively finished if he doesn’t win this coming Saturday and the way things are going doesn’t look like he’s going to.

But, that’s why he’s telling this lie. That’s why he’s out there trying to connect with African Americans by lying to their faces and saying, listen, I tried to visit Nelson Mandela. I was with the UN ambassador. I was one of the only people going over there to visit with him and Oh, I got arrested, just because I wanted to see this great fighter of freedom. The fighter of Apartheid. And, and it’s not true. None of it, not a single word of it. This is absolutely the lowest, most disgusting and despicable form of pandering that we have seen absolutely during this entire campaign. And it’s coming from Joe Biden and he’s doing it because he’s desperate and he’s doing it because he has nothing else to lose at this point. He has already lost all the support that he can afford to lose. So if this maybe ticks him up one or two more points with the voters, he’s still in it. But if they find out like the rest of us have that he’s absolutely lying to them, then this is absolutely the last gasp of breath of Joe Biden’s third presidential campaign.