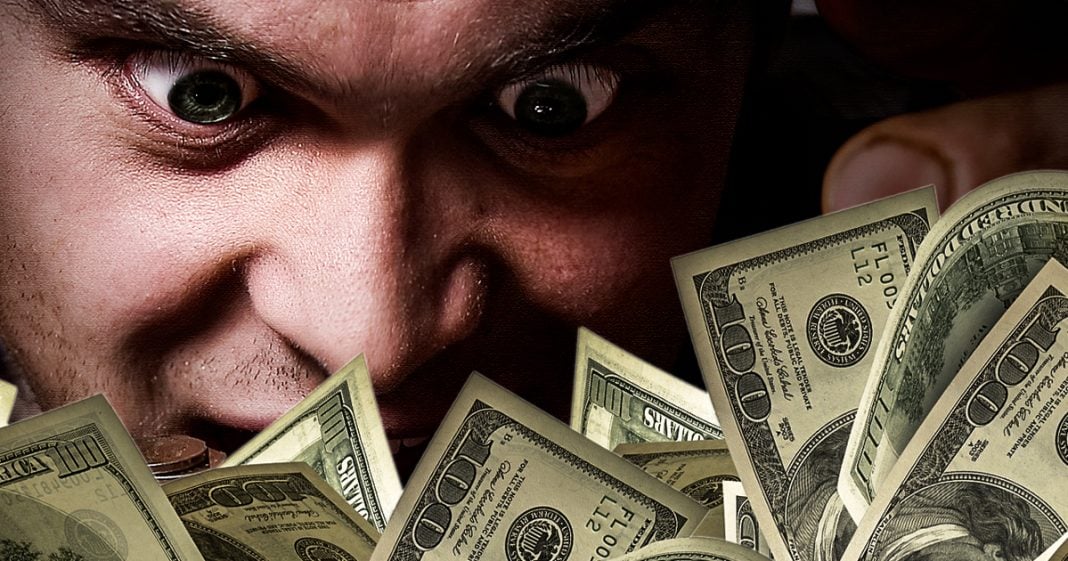 A shocking new report from the United Nations warns that runaway inequality – like what is happening in the United States – can easily destabilize an entire country. The report also says that it isn’t just those at the bottom who suffer; The greater inequality grows, the more likely it is that those at the top will experience severe financial decline in the long run. Business as usual is not sustainable, as Ring of Fire’s Farron Cousins explains.

This week, the United Nations issued a new report telling us that runaway income inequality, both in the United States and in other countries across the planet, has a destabilizing effect on democracies and in fact, if inequality continues to grow in the way that it is, you can pretty much go ahead and kiss your democracy good-bye. Here is how they explain it for here in the United States. The top 1% of households have roughly doubled their share of the nation’s wealth since 1980 leaving less behind for everyone else. The 400 richest Americans now have significantly more money than the 150 million Americans in the bottom 60% of the distribution. Now, this is not new news right there. Those are things that have been widely available for quite some time. It is something Bernie Sanders mentions constantly on the campaign trail. In fact, it’s almost as if Bernie Sanders himself wrote that. But now we have the UN warning us that, hey, here is how bad the problem is. But again, we knew about how bad the problem is. So go ahead, UN, tell us, tell us what happens when this runaway inequality gets worse.

Well, they do that too. When the rich shape a country’s institutions in their own image and to their own benefit, it’s little wonder that trust in those institutions declines as it has in the United States. That lack of trust creates a vacuum for authoritarian and nativist regimes to take root, according to the United Nations. The central message of populous movements has historically been that the common people are being exploited by a privileged elite, and that radical institutional change is required to avoid such exploitation. That part is a direct quote from this UN report. So if we continue on this path, if we continue with business as usual, we can look forward to a faux populist taking power here in the United States and then reshaping our institutions only to their personal benefit. So if you ask me, I think this United Nations report is about four years too late because that is exactly what already happened here in the United States. We’ve seen it, we’re living it. We’re in year four of it. Donald Trump ran his campaign as a phony populist. Went out there and told people working 60 hours a week working their fingers to the bone, said, I have so much in common with you. I’m just like you and your plight, wow, this is horrible. I want to make your life better.

Of course, he had no intention of making their lives better. All he really did was tell them who to blame, which he blamed it on Mexicans, even though that’s not true at all. But he did campaign as a populist. Then he gets to Washington DC and what does he do? Well, he cuts taxes for the wealthy elite and that includes himself. He spends the government’s money, our tax dollars, at his own businesses, so he gets to put that money back in his pocket. He skirts the rule of law. He breaks the law multiple different times and is never held accountable for doing so. And he has reshaped the government, used his own personal campaign, all of it to his financial benefit, while not one single time ever passing a policy to benefit average working class people here in the United States. We got hoodwinked and as a result, inequality grew.

Inequality has been growing ever since those tax cuts were put in place because our wages are stagnant, but the top 1% are doing better than ever. But the UN report also comes with another warning and this one’s not to the government. This is actually a warning to the wealthy elite themselves because the UN warns that if you create enough inequality, if the wages for those at the bottom continue to stagnate, then guess what? Guess what they’re not going to do? They’re not going to be able to buy your apps. They’re not even going to be able to buy your iPhones. They’re not going to be able to buy your TVs or your pharmaceuticals or afford your gasoline and then eventually, rich people, everything you have been hoarding for decades is going to disappear. This isn’t just an issue for those of us sitting at the bottom. This is an issue for everyone at the top as well. We’ve already been through hard parts. We’re already suffering from this and the UN is trying to tell the wealthy elite that if you don’t change, if you don’t do something about this, if you don’t work on redistributing the wealth, you’re going to come crashing down too.