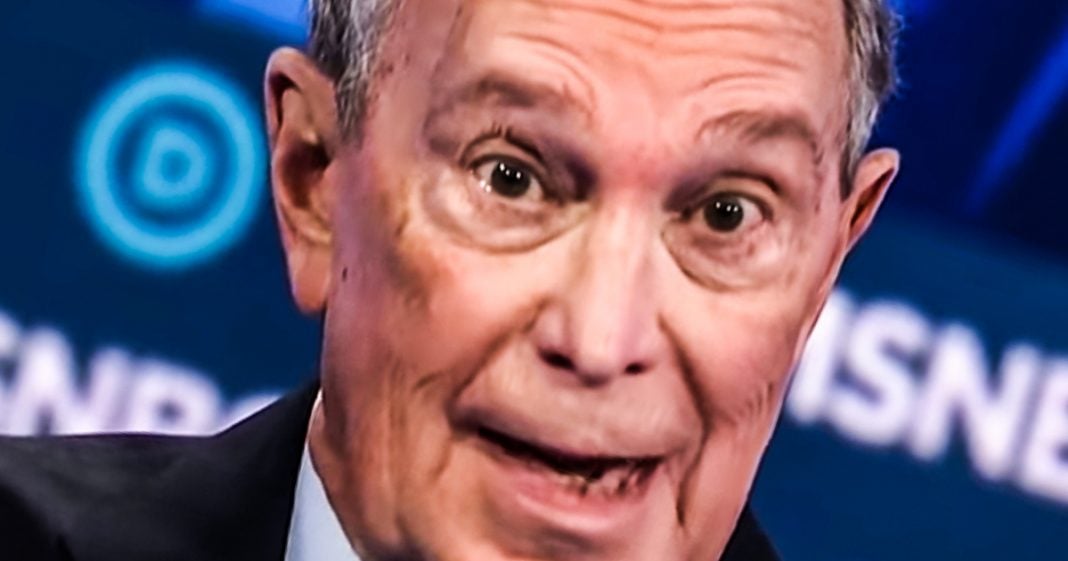 A recently resurfaced interview of Mike Bloomberg following the 2016 election reveals how he feels about young voters. In the interview, Bloomberg says that the reason young voters gravitated to Bernie is because they are dumb. Bloomberg blamed the school systems for no longer teaching things like Civics, but the truth is that Young Voters have never had a country that actually worked for them, and they are far more informed than their predecessors. Ring of Fire’s Farron Cousins discusses this.

In December 2016, about a month after the 2016 presidential election, former New York mayor, Michael Bloomberg, appeared in an interview where he talked about the fact that Bernie Sanders could have become the Democratic nominee and he probably would have had a pretty good chance of beating Donald Trump. But the problem is, according to Bloomberg, the youth vote didn’t show up for him and had they done that, they absolutely would have voted for Bernie. Now, Bloomberg wasn’t telling us this to be one of those, Bernie would have won folks. He was telling us this as a warning and the warning is that young people, young voters are too stupid to know that Bernie Sanders is not a good choice. Here is what Michael Bloomberg said and these comments at Oxford University School of Business. I don’t mean to knock young people. I wish I was one again. But young people listen to Bernie Sanders and they said, yeah, Democratic. That’s good. Socialism. Yeah. Yeah. That’s the social media stuff because our kids no longer learn civics in school. They no longer study Western history. They no longer read Western literature. We’re trying to change and dumb down the system. And if you don’t know what happened in the past, you’re going to have to relive it.

So Bloomberg thinks young voters are just stupid. You’re stupid because you think socialism means Twitter and Facebook. Now, I have never met anyone young or old who thinks that Democratic socialism somehow refers to social media. I mean, maybe a scripted character in a sit-com who is designed to be dumb would think something like that. But actual real people out here in the United States, regardless of their education level, I don’t think that they think that, Michael. Here’s the problem with people like Bloomberg. He doesn’t understand why young voters are attracted to Bernie Sanders’ ideas and the idea of Democratic socialism. They do, young voters, understand that we’re not talking about communism. We’re not talking about full blown actual socialism. We’re talking about Democratic socialism, like what they have in many European countries where constituents are guaranteed healthcare. Many of them tuition-free college. And yes, they may pay a little bit more in taxes for those things, but overall they save money because the government provides more services.

And those countries are consistently ranked as happier and healthier and economically more powerful than the United States. That’s what the young people understand. Why? They may not be learning it in school, but they are in fact out there reading, Michael. They’re reading articles, they’re studying this. They have more access to information than you did at their age and believe it or not, they’re using it. Sure, young people like all of us, when we were those ages do stupid things and now unfortunately they get to post those stupid things online. We didn’t have to do that as kids, but we would have had they existed. And some people will clip out those little videos of, you know, the cinnamon challenge or whatever, you know, thing is of the day and say, look how dumb young people are. You want them choosing the president? You’re going to pick out like six people out of a country of more than 300 million and say, well, they represent all young people. They’re awful and stupid. We can’t trust them.

No, most young voters are educated. They know what’s happening and more importantly, the reason they gravitate towards this Democratic socialism like that which is preached by Bernie Sanders is because capitalism has never worked for them a single day in their entire lives. That’s the hard truth that people like Bloomberg don’t want to accept. He has been a huge beneficiary of the American capitalistic system, made $60 billion off of it. The rest of us, we went to college, got tens of thousands of dollars in debt, graduated with our degrees, and then struggled to try to find something within that field and when we did find something, either it wasn’t a good enough paying job or just didn’t work out. Job left, job went to another country and they’re trying to replace us with a gig economy where everybody is a contract worker. Yeah, Capitalism has failed young voters and people like Michael Bloomberg who have been rare to be the beneficiaries of capitalism, will never understand the appeal of paying a little bit more in taxes to get a lot more back from the federal government. But that doesn’t make the young voters stupid, it makes them aware of their own situation and the failures that people like Michael Bloomberg clearly illustrate for us.