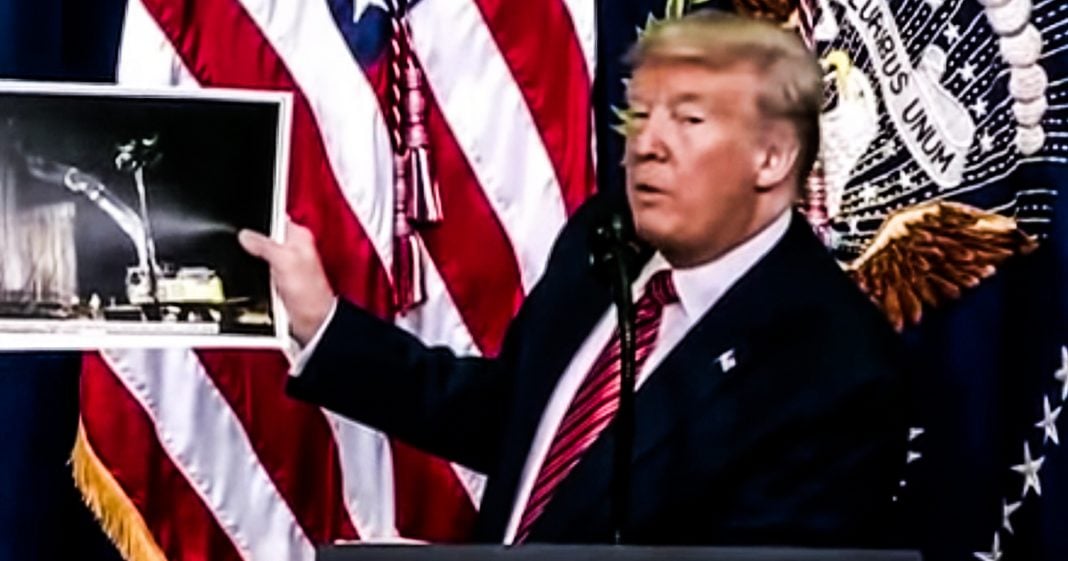 Donald Trump has decided to “waive” multiple different laws regarding federal contractors in order to get his border wall built faster. This move should immediately raise red flags with the American public, not just because this is likely illegal, but also because this is just his latest attempt to appease his rabid base before the election. Ring of Fire’s Farron Cousins discusses this.

To say that Donald Trump has no respect for the rule of law, I think would probably be a gross understatement, right? We all know that Donald Trump has no respect for the rule of law, but each day we’re kind of finding out a little more and more about how little regard he has for it. Take for example, this story that came out earlier this week. Apparently Donald Trump has decided that in order to appease his rabid base, he’s got to get his border wall built as quickly as possible so that he can have the 450 miles that he’s promised constructed before the 2020 election. But in order to do that, he kind of has to screw with the process a little bit. See, there’s a reason why federal projects seem to take a little bit longer and it’s because there are lots of different laws, actual laws in place, that govern how money is spent by the federal government, especially when it comes to hiring private contractors.

So Donald Trump this week said, you know what? It is within my authority to do this. So I am going to temporarily suspend those laws so that we don’t have to abide by them so that I can fast track my border wall. And these are all laws, 10 of them, that apply to the procurement of the project, meaning what materials are used, how those materials are purchased, who they are purchased from, who gets hired to do the job and eliminating competition in the bidding process. Basically doing away with the bidding process. So whoever Donald Trump and the department of homeland security say, yeah, this guy looks good. He gets to go do it. That’s it. There’s no more bidding. There’s no more analysis of which company’s legit and which one may rip you off. They’re just going to pick somebody willy nilly, most likely a Trump supporter based on the people we’ve seen building the wall in the past.

And that person then gets to have that job and they get to make millions and billions of dollars possibly. And, you know, we’re not going to be looking over their shoulder to make sure they’re using the correct materials or that they’re even doing the correct job in the first place because Trump just wants it done. Now here’s the question I have for Donald Trump supporters out there who are just giddy over the fact that we’re going to have this border wall. We saw reports, what a week and a half ago, where part of the wall blew down. Right? Like the big bad Wolf is sitting over there in Mexico just huffing and puffing. But they had a heavy breeze. Part of the wall blew down and it’s because they didn’t set the concrete properly. And I know they say it’s, well, it wasn’t dried. Yes, but you do not lay concrete in inclement weather.

So you hired a contractor who didn’t know what the hell they were doing and we look like a bunch of morons with a border wall that blew over in a light breeze. What’s going to happen when there’s no more competition and where Donald Trump, who has proven that he’s already going to do this, hires some nut job off the street to build this crazy border wall? I can’t wait to see how his base is going to react. But the thing that terrifies me the most is one, that this thing is going to even exist because it’s unnecessary and it’s disgusting. Let’s get that out of the way right now. Okay. This is an absolute disgusting project that is meant to show the world that the United States does not like you, will not tolerate you and doesn’t even want to look at you. We as a country should be better than that by now, but clearly we’re not.

The second thing, we are about to lose billions of dollars by Donald Trump ignoring and waiving these laws that are in place. These laws are in place for a reason. Fraud against the government is a massive, massive racket for private contractors. We have seen it happen countless times over and over again with our forever wars that we have going on over there. We have seen it happen with Medicare and Medicaid through these private hospital corporations. You can ask my Senator Rick Scott about that. He knows a lot about it and how to do it, and that’s what’s going to happen with this border wall. You took away the regulations, you took away the oversight and you’re going to hire the dumbest people you can possibly find to build this border wall who are going to do a horrible job and then pocket millions of dollars in profit. My prediction is that 10 to 15 years from now, we will likely be seeing massive lawsuits against the shotty government contractors hired to build Donald Trump’s wall.