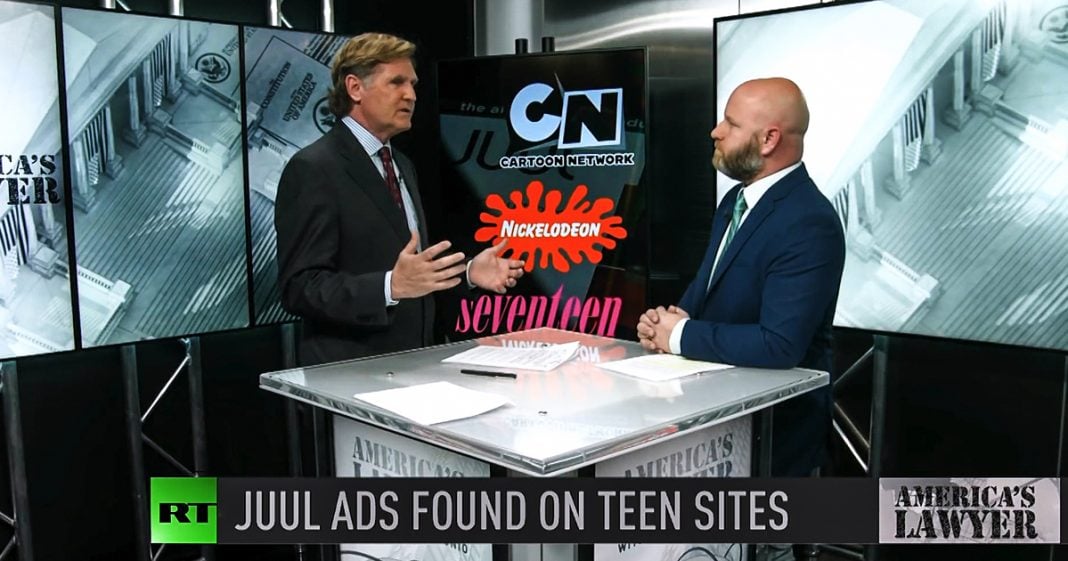 Via America’s Lawyer: JUUL is facing the fire as ads for their e-cigarettes have been found popping up on websites designed for teens, including Cartoon Network and Nickelodeon. Mike Papantonio and Farron Cousins discuss.

Mike Papantonio:             E-cigarette maker JUUL has been busted advertising on websites for children blowing a hole in their defense against numerous lawsuits that have been brought. We’ve brought lawsuits ourselves. Talk about this case a little bit.

Farron Cousins:                  Well, JUUL has maintained forever that we’re not advertising towards children. We’re not marketing to kids. You know, that’s just a happy accident, I guess. But turns out they have been actively advertising on websites that are specifically designed for children only. I mean, Nickelodeon, Cartoon Network, Seventeen. I mean, Seventeen, you’re not even old enough according to the title of the website. But that is what JUUL has been doing. They are the new big tobacco. It’s big tobacco 2.0. It’s the digital version of it. And they’re engaging in the same kind of techniques that we saw through the tobacco litigation. JUUL is no different. Their defense is no different and I think their fate is going to be the same.

Mike Papantonio:             The bottom line is this. Here’s what we know from the documents. This is not really about JUUL, you know, and the puffer machine. This is about trying to get kids back to traditional tobacco. What we learn, we, full disclosure again, we handled the first tobacco cases in America. And so what we learned was that the, what ends up happening is the documents show that they tried to get kids hooked by the time they’re 14 or 15 to nicotine and cigarettes, traditional tobacco. If they can do that, then that is a loyal customer for the rest of their lives until they die of cancer, till they die of heart disease. That, the documents are overwhelmingly clear about that. As we look at this, it’s a little uglier because they’re going after just instead of the Marlboro man, they’re going after kids, Nickelodeon, Cartoon Network, Seventeen magazine, no question about it. They’re adding in fruit flavors, olly olly orange, you know, goofy grape stuff like that, Michael mango. And you go, really? I mean, what, and at the same time, the guy running the program for JUUL is an ex employee, high management for traditional tobacco. So I mean, we see it.

Farron Cousins:                  It’s, it’s the same story, just modernized for a new audience. And unfortunately a lot of these people who will go out there and defend JUUL and defend vaping, you know.

Mike Papantonio:             My God, when we do a story on this, every knucklehead in the world comes out talking about, oh, this is, this is a wonderful invention because it’s going to save us from tobacco.

Mike Papantonio:             No, it’s gonna kill you another way. But ultimately they don’t get, they’re trying to move people back to traditional tobacco by getting them hooked on nicotine right off the top.

Mike Papantonio:             So, knuckleheads, keep the comments coming. Look, thanks, thanks for joining me. Okay.