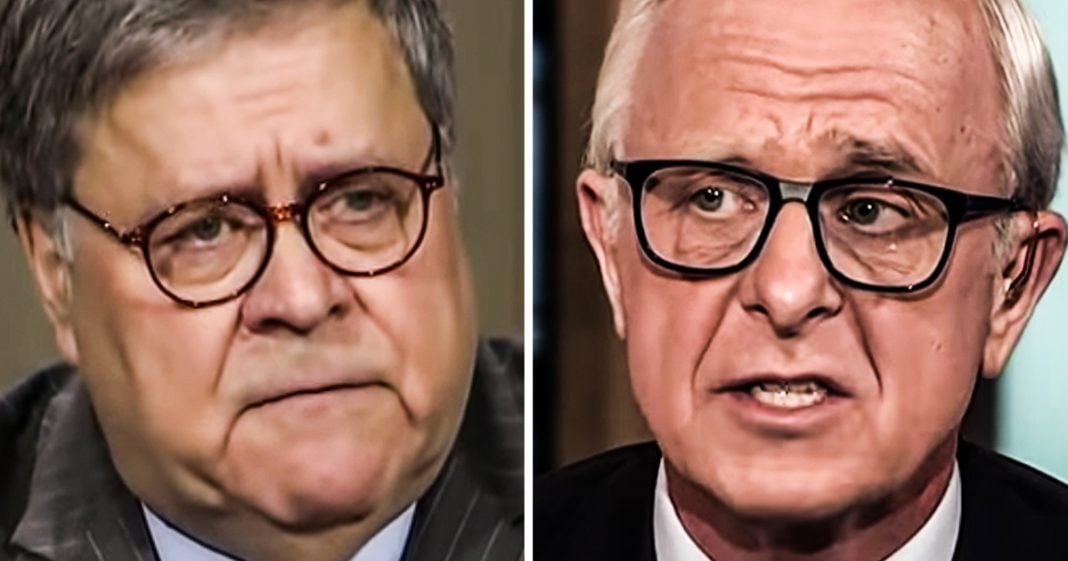 The former Deputy Attorney General under George H.W. Bush, Donald Ayer, wrote an op-ed recently where he declared that William Barr, the current Attorney General, is not fit to serve his office and deserves to be removed. This comes as a group of several thousand former DOJ employees spoke out against Barr and a judicial organization held an emergency meeting to discuss the crisis happening under Barr. Everyone knows what Barr is about, but that’s exactly why he got the job in the first place. Ring of Fire’s Farron Cousins discusses this.

Recently a man by the name of Donald Ayer, who most people in this country do not remember, but he did in fact serve as the deputy attorney general under George HW Bush, the first Bush president. He pinned an op-ed saying that William Barr has proven that he is unfit for office, that he should either be removed or impeached or resign, and that he has turned the entire department of justice into Donald Trump’s personal law firm that only serves to do Donald Trump’s bidding. Now keep in mind, this is coming from a Republican. This is coming from a Republican who let other Republicans slide on their criminal behavior, but even this Republican looking at the DOJ today, knowing that the DOJ has essentially been defunct since Reagan’s years has finally looked at it and said, you know what? This is messed up. This is wrong, and it all starts with William Barr being nothing more than a very vicious and angry little lapdog for Donald Trump. The same day that this op-ed came out, we also received news that we had more than 1000 former DOJ officials come out and demand that William Barr either resign or be impeached. The next day we had the federal judges association that called an emergency meeting to discuss the crisis happening at the DOJ, at the hands of William Barr.

These other two groups, the thousands of former DOJ employer, employees and the federal judges association, these are bipartisan groups. You have Democrats and you have Republicans and you have independents. Ayer, the one who wrote the op-ed is a Republican. So at this point, it is fairly safe to say that both Republicans and Democrats all agree on one thing and that is that William Barr is absolute trash as attorney general of the United States because he’s not the attorney general of the United States. He is the attorney general of Donald Trump, of Donald Trump’s personal affairs and of Donald Trump’s friends. That’s what the DOJ has become and that is what these Republicans and Democrats are out there trying to warn us about. There are very real things in this country that need to be investigated and need to be prosecuted. But unfortunately this department of justice is not going to do any of that. And as I mentioned, we have seen a decline in what the DOJ does in terms of actually enforcing the law in the United States since about the 1980s but even to his credit, Ronald Reagan threw over 600 bankers in jail for their role in the savings and loan scandals.

And I’m willing to bet we haven’t even seen 600 bankers go to jail in the time since then, after being prosecuted by the DOJ. So at least Reagan did that. As horrible as he was, he had that one good thing under his belt. And then after that, everything went to hell. Bill Clinton’s not prosecuting white collar criminals. George W. Bush didn’t. Obama didn’t. Trump isn’t, we could, we’re not. And now the DOJ isn’t even going forward, investigating the small little things and then trying to work out these sweetheart deals with them. All they’re focusing on at the moment is protecting Donald Trump from the myriad of investigations and lawsuits that he is currently facing. Let’s lay this out real quick. Donald Trump is being sued for defamation by multiple different women. Donald Trump has been accused of financial fraud and is being investigated for that. So the DOJ is having to investigate that. Been accused of violating the emoluments clause of the constitution. That one’s still going through the courts. The most recent ruling on it was not good for the Democrats who filed the suit, but good for Trump, but it’s going to be appealed. So DOJ, is fighting that for him. They’re fighting back holding his taxes. They’re fighting back other subpoenas from the House of Representatives. This DOJ is working full time and around the clock just defending Donald Trump in court.

Not to mention the fact that Trump now has a direct line in there and they’re willing to do whatever he tells them to do. Just like William Barr and the Roger Stone case, and that’s what’s got everybody so freaked out. Here’s the thing though, it doesn’t matter what kind of sentence they’re going to recommend for Roger Stone. He’s going to be pardoned, so you may as well say, we request a 50 year sentence, whatever. He’ll be pardoned before he ever even gets taken to the prison. That’s what Trump’s going to do. That’s why he spent this week telling us how biased and horrible the entire trial was. He’s already building his case. He’s trying to make the case to the public that it was flawed and skewed and biased so that they’ll care less when he pardons Roger Stone. That’s what’s going to happen, but that’s not going to fix what’s wrong with the DOJ. William Barr is not going to resign or retire or step down. William Barr is doing exactly what he was put in that DOJ to do, and that is to make sure that Donald Trump doesn’t end up in prison.