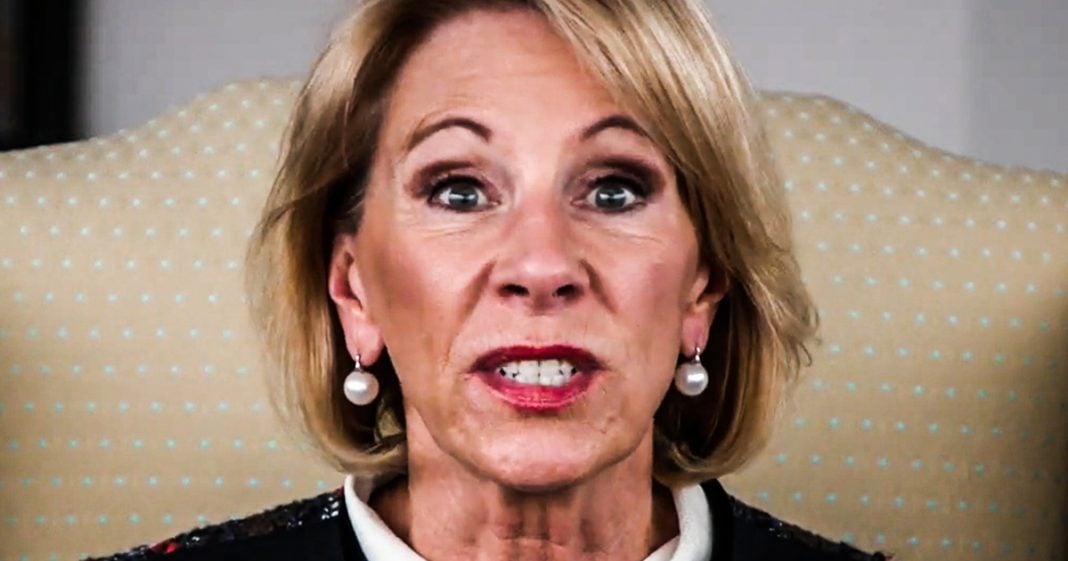 Education Secretary Betsy Devos is absolutely the worst member of the Trump administration. She recently revived an accrediting agency that gave accreditation to a college that has no students, no faculty, no teachers, and no actual classrooms. In essence, the school doesn’t even exist, but Devos allowed it to receive credentials. Ring of Fire’s Farron Cousins explains what’s happening.

During the Obama administration, there was a college accreditation agency that the Obama administration looked at, realized that this agency was doing a horrible job and giving accreditation to schools that did not deserve it and did not qualify for it. So they shut it down. This was the accrediting council for independent colleges and schools and some of the schools they accredited were Corinthian Colleges who turned out to be a total scam. FastTrain college, ITT Tech and Brightwood college, all of which were proven to be scams handing out completely worthless degrees to students and saddling them with tens of thousand dollars in college loan debt. So Obama shut down the accrediting agency. Well back in 2018 Betsy DeVos looked at it and said, you know what, I liked that group

Probably because, you know, they were accrediting colleges and Betsy DeVos is a big investor of for profit schools, so she was probably making money off of it. So she restarted this organization and now they have given accreditation to a college, a for-profit college, that doesn’t exist. The college is called Reagan National University and an investigation by USA today found out that it has no students. It has no faculty, it has no campus and no classrooms, no curriculum, because it doesn’t actually exist anywhere except on paper. And this accrediting agency that was shut down because they were a complete fraud, looked at this, said, this University’s not real. It’s not an actual thing, but let’s go ahead and say that it is and Betsy DeVos is the one who gave that the green light here. Here’s a report here. USA today contacted seven faculty members listed on the website of Reagan National University in Sioux Falls, South Dakota, four of whom taught at entirely different colleges and said they had never worked at Reagan National. While many other listed educators were entirely absent from the internet, lacking personal websites and social media profiles.

Imagine that, right? A college professor that isn’t on Facebook or Twitter or Instagram or LinkedIn or doesn’t have a webpage, doesn’t have a webpage for their college. Every, every professor has that except for these, and they can’t find them anywhere on the internet, which essentially means they also don’t exist. But the four who do exist say, I’ve never worked there. Why? Why am I, why am I being listed at a fake college as being a teacher? And again, it all comes down to money. The only reason Betsy DeVos is our current secretary of education is because she had spent a lot of her life investing in for-profit colleges and schools. That’s the extent of her knowledge about education is how to make money off of it. And she knew that her and her buddies could make more money if they revived this discredited accrediting agency, allowing them to give accreditation to colleges, like in the case of Reagan National, don’t even exist.