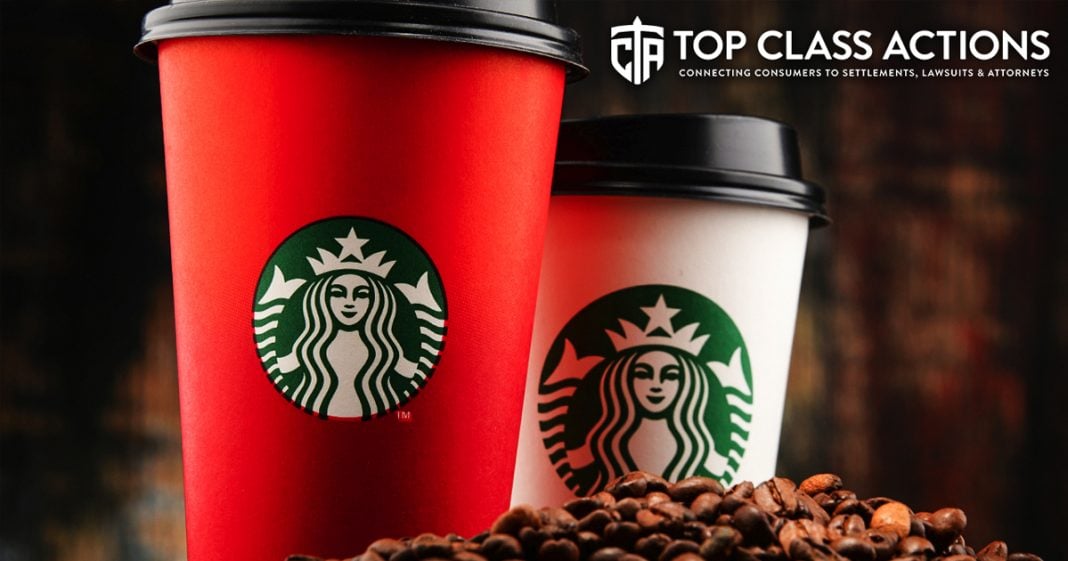 A California resident claims that not all Starbucks venti drinks contain more caffeine than their grande counterparts, and has filed a class action lawsuit against the coffee chain saying that this inconsistency is misleading customers. The Starbucks caffeine content class action lawsuit was filed by Teresa Adams who says she purchased a venti Pumpkin Spice Latte from a Starbucks on Nov. 20, 2019 in California. She says that the venti size (Starbuck’s large size) did not contain more caffeine than the smaller, grande size, and instead just contained more steamed milk. She argues that this information is not made available in the store or in the drive-thru. Ring of Fire’s Farron Cousins discusses this with Scott Hardy, President of Top Class Actions.

Farron Cousins:                  In most places in the United States, you’re never more than just a few minutes away from a Starbucks. I mean, let’s be honest, we’ve known that over the last couple of decades these things have popped up everywhere. Most people love Starbucks. You get in, you get your coffee, you get out or you hang out, you meet friends there. It’s great, right? Well, according to a new class action lawsuit, Starbucks in the midst of all of our caffeine addiction has actually been shorting us on the products that they’re selling, making us think we’re getting more when in fact we’re getting less. Joining me to talk about this is Scott Hardy with Top Class Actions and Scott, you know, Starbucks has their, their special names for their small, medium and large, and when you order the large, you expect, obviously I’m getting more of what I’ve just ordered, but a lawsuit happening right now says you’re really not. They’re giving you filler essentially, aren’t they?

Scott Hardy:                          That’s right. You’re going there for your caffeine kick. You’re getting your venti. You’re saying, hey, I want this large venti yummy drink that I’m so addicted to. I want that extra shot of caffeine, but it turns out that a lot of these drinks that you’re getting, the venti has the same amount of caffeine as a grande. So according to this class action, you’re, you’re paying for more, but all you’re getting is some extra cream. And frankly, I was surprised when I went through the drink list because I seem to recall when I would go into Starbucks, I’ve said to them, hey, if I get the venti I get more espresso. Right? And they said, yes, we will give you three shots instead of two that are in the grande. But according to this class action, my beloved white chocolate mocha is in the list and I’m getting the same amount of caffeine in my venti as I’m getting in my grande.

And frankly, I would rather just have the grande because I don’t want the calories. If I knew I was going to be getting the same amount of caffeine and the venti as I would with the grande I wouldn’t pay for the venti and I would be patting myself on the back for counting a little less calories. But the number of drinks that this includes is, you know, most of their most popular drinks. The Cappuccino, Caramel Cloud Macchiato, Caffe Latte, Cinnamon Dolce Latte, Cocoa Cloud Macchiato, Vanilla Bean Coconutmilk Latte, and of course my favorite, the White Chocolate Mocha.

Farron Cousins:                  And what’s interesting here too is obviously you have people who go in, they just want the bigger size because they really like the drink, they just want more of it. Then you have people like me. When I, when I go to a Starbucks it’s because I need caffeine. I need something to keep me going. I need coffee, I need the biggest one you’ve got because it clearly is going to have the most caffeine in it and that’s what this is about. If you’re just drinking it because you love the flavor and you just want a big batch of that flavor, sure, that’s one thing. But if you’re going there because you’re like, by God it’s 10:00 AM and I still can’t get my butt going, I need more caffeine. That’s what this is about. Not to mention the fact, as you pointed out and this, this is a really interesting point too. You’re getting a lot more calories than you think if they load it up with cream instead of our, you know, magic bean water that makes us go faster. There’s a whole lot more calories in heavy cream or half and half, whatever it is, than there is in just hot water poured through these coffee beans.

Farron Cousins:                  And I think, you know, obviously this one’s, you know, pretty cut and dry. Starbucks is a huge corporation. They’ve got tons of money. So, probably, and this is just shot in the dark here, probably what we’re looking at is one, maybe a change in policy or two, maybe a disclaimer. But most likely out of all of this is option number three. Probably going to get some coupons and things like that out there for people, right?

Farron Cousins:                  Right, and as you said, you know, I mean they do have the rewards program. My wife orders Starbucks every morning and she does it through the app on her phone. So it’s, you know, there, there’s a paper trail there. So they, they can pretty easily determine a lot of the people who typically regularly order these beverages and hopefully they’ll make it right. Hopefully this thing will settle, but, you know, they, they may drag it out just a little bit and kind of see which way the litigation is going before they make that final decision. But ultimately I think, I think Starbucks probably will end up doing the right thing here. So for more information about this issue, please follow the link in the description of this video and head on over to Top Class Actions and while you’re there, make sure you sign up for their weekly newsletter. Scott Hardy with Top Class Actions, thank you very much for talking with us.