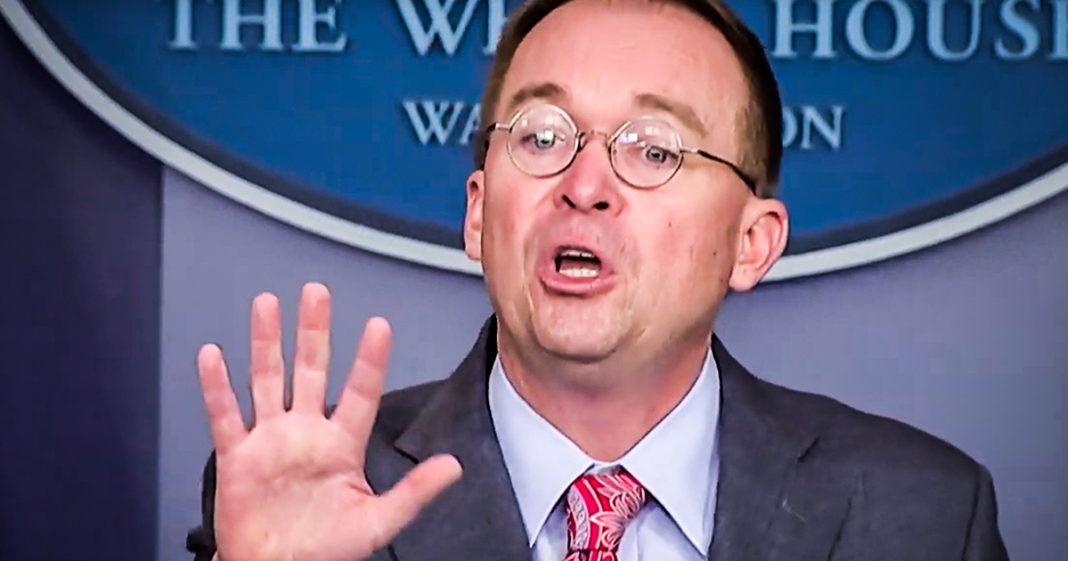 During a speech this week, Donald Trump’s acting chief of staff Mick Mulvaney admitted that the United States is “desperate” for more immigrants to enter this country, though he admits that they only want the “legal” kind of immigrants. The problem is that the U.S. has become so angry towards immigrants that they simply don’t want to come here, and it is going to be devastating for our economy. Ring of Fire’s Farron Cousins discusses this.

Earlier this week at a private meeting in England, Mick Mulvaney, Donald Trump’s acting chief of staff, told the people there at that meeting that the United States is actually desperate for more immigrants. Mick Mulvaney coming from one of the most anti-immigrant administrations in recent history telling a crowd in private, obviously, yeah, we actually need more immigrants coming into the United States. Now, he did preface it by saying, obviously I’m talking about the legal kind of immigrants, you know, not the illegal immigrants, but either way, we really need these people coming into this country. And the reason Mick Mulvaney said is because, we are running out of people to fuel the economic growth that we’ve had in our nation over the last four years. We need more immigrants. Those are his exact words, according to the people in attendance. And that just kind of hits on what we have been saying since the start of the Trump administration.

And that is you cannot have sustainable economic growth if we do not have these immigrants coming into our country. Believe it or not, folks, there actually are jobs that American citizens do not want to do and those are the jobs that typically get filled by these immigrants. Great case in point, many years ago, about seven or eight years ago, state of Georgia enacted a tough immigration policy that actually limited and in many instances outright restricted the use of temporary guest workers coming into the state of Georgia. What happened that year was that farmers didn’t have anyone to go out there and harvest their crops. You had fruit rotting in trees, vegetables rotting in the fields, farmers losing tons of money because they couldn’t find anybody else willing to do it. So when I say that, yeah, sorry, there are jobs some Americans just simply refuse to do or they’re physically not able to do.

I know what I’m talking about because we’ve seen it happen within the past decade. We have seen reports over the last three years of small businesses across this country, typically in the landscaping industry, losing money, some of them having to shut down because Donald Trump has actually clamped down on legal immigration. Limited the number of those temporary guest worker visas that we’re distributing every single year. And because of that, our economy is suffering and at least Mick Mulvaney understands that, which is actually a more classical Republican approach to immigration. They understand that, yeah, we have to have these people coming over. They do jobs, they contribute to the economy, but if we’re ever pressed on the issue, of course we’re going to say that these people are evil, that we need to keep them out, that they’re taking your jobs, even though we know that’s a lie. And that’s essentially what Mick Mulvaney was admitting in that private room in England.

That’s what happened. The truth is that the United States economy is dependent upon immigrants, and as long as Donald Trump is serving as president of the United States, and he’s got Stephen Miller whispering in his ear, we’re going to continue to suffer because this man knows that he can’t give an inch on the issue of immigration. He has backed himself into a corner because of Stephen Miller. If he were to allow more guest workers to come over here to the United States, Miller would erupt. Ann Coulter would erupt as we have seen her do in the past. His base would go into a frenzy, claim that he conned them on the issue of being tough on immigration, and he simply won’t risk that. So he would rather see the economy suffer because we’re not bringing in enough immigrants, as Mick Mulvaney says, than half to anger his base by letting a few more people come in.