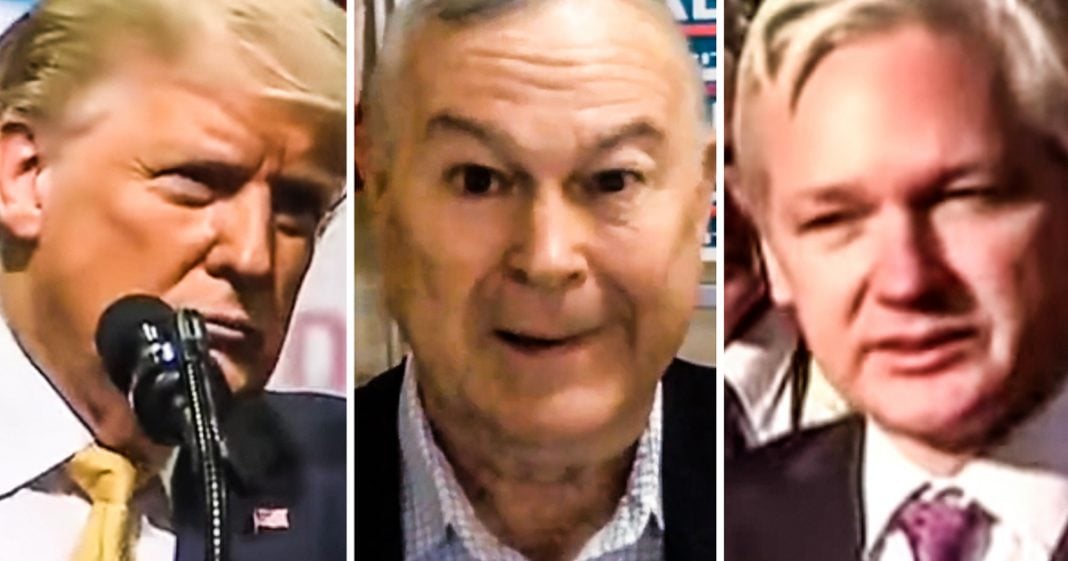 Former Republican Congressman Dana Rohrabacher has confirmed that Julian Assange and his lawyers are telling the truth about the Trump pardon that was dangled in front of Assange if he were willing to lie about the Russian involvement in the DNC hack. This makes the scandal a lot more credible, and shows that now may be the time to launch a new investigation. Ring of Fire’s Farron Cousins discusses this.

So as we talked about yesterday, earlier this week, Julian Assange was in court in London actually via teleconference, but he and his lawyers argued that Trump, the Trump administration tried to dangle a pardon in front of him if he was willing to lie about the source of the DNC hack, which came from Russia. They wanted to say that, no, in fact, it did not come from Russia. And we also had found out that Dana Rohrabacher, a former Republican Congressman, was the one who met with Assange to make this offer to him. Now, the Trump administration immediately came out after all these stories came out and said, nope, they’re lying. This never happened. This isn’t an actual thing. So then Rohrabacher comes out and he says, well, okay, actually it is a thing. I did in fact do this. In fact, Rohrabacher said, I told him that if he could provide me information and evidence about who actually gave him the DNC emails, I would then call on president Trump to pardon him.

That is the statement released officially by former Republican Congressman Dana Rohrabacher, which does appear to confirm the story. Now Rohrabacher did continue and he tried to make it sound like, oh, but no, no, no, no, no. Donald Trump had, he didn’t have knowledge of this, you know, he didn’t tell me to go and do this. It’s just something that, you know, I did and then he immediately tells us that, oh, and by the way, right after I met with Assange in that embassy, I then called the White House, spoke to general John Kelly and told him everything that just happened. So the White House knew nothing about it, allegedly. As least, you know, what Rohrabacher wants us to think. Although the second he steps out of this meeting, by his own admission, he immediately calls them and says, guess what I’ve got? Yeah, you’re going to be hard pressed to convince anybody that the White House didn’t know what was going on.

Is this going to lead to a second impeachment? Nope. Should it? Nope. What we need to do is get the findings from this investigation and just kind of sit on it for a bit until hopefully late January of next year, at which point, hopefully a different United States president, a different attorney general, can then decide what kind of action to take against Donald Trump and everybody else involved in this scandal. That is one of the reason these investigations are so important. Not because we need to do something now, but we need to get all this information, have it on the record and ready to go so that by the time the next president gets sworn in, we don’t have to start the investigation then and worry about running up against the statute of limitations. It needs to happen now so we can be ready in the future.