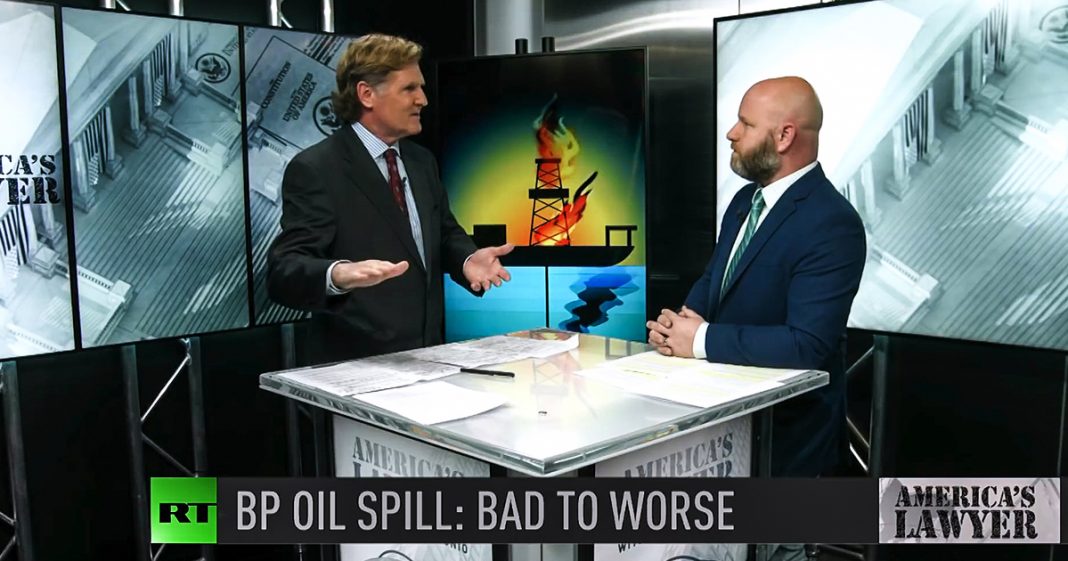 Via America’s Lawyer: Mike Papantonio and Trial Lawyer Magazine editor Farron Cousins take a look back at the 2010 BP oil spill, which new studies show was actually far worse than reported. BP had made concerted efforts with media outlets to downplay the impact of its Deepwater Horizon spill, which ravaged marine ecosystems in the Gulf of Mexico and surrounding waters.

Mike Papantonio:             A new report says that the damage from the Deepwater Horizon disaster in the Gulf of Mexico was far worse than we ever thought it could be. Joining me to talk about that is Farron Cousins from the trial lawyer magazine? Farron, we saw this coming, your reporting and my reporting while the, full disclosure, we handled part of the BP case. We were one of the four firms that were signed to handle that case and so as we were handling the case, we kept asking the question, what’s the long term? And of course their experts said, oh gee, nothing to worry about. Just get it cleaned up at the surface and everything’s going to be fine. Take it from there.

Farron Cousins:                  Yeah, we, I mean we were all told back in the day, BP would go out in the media and the government would even release reports saying we’ve got to contained, right. You know, the oil is not going to get out of this little containment area. What parts did we, we treated with the Corexit. It was going to evaporate and disintegrate. But this latest study 10 years later finally told the truth and it said, listen, those containment barriers that the government put up, that the companies put up, they did nothing. It didn’t contain it. It didn’t keep that oil in there, and now we’ve found out because of that, the damage they said is about 30% worse than what was originally estimated at the time. So here we are 10 years later, finally getting more of the truth than we’ve ever had.

Mike Papantonio:             And as it dies, it’s part of the, it’s part of the structure. It’s, it’s part of that entire field of structure. Plankton to the next level, to the next level, to the next level. You destroy the plankton and you’re destroying the very heart of the feeding process that takes place in the Gulf of Mexico. What’s interesting is when the litigation was going on, the government was asked straight up, what are the long terms? What are the long term problems? And the government scientists that were trying to make this whole thing go away said, oh no, we don’t really have to worry about it after we take care of this first round and the first round really was just to make the oil disappear and they made it disappear with something that was even worse than the oil.

Farron Cousins:                  And the rest of it ended up in the big current, you know, through the coast of Louisiana, Mississippi, Alabama, down to the tip of Florida. Then all the way back into the currents hitting Texas, almost like this horrible oil, oil hurricane in this endless cycle.

Mike Papantonio:             Yeah, it’s the current loop is the way they describe it. It’s, it’s waves. It’s a loop current that does it. And the truth is that we’re talking about 210 million gallons of oil. The prediction is if you follow this report, that 50%, 50% of marine life will be decimated by this as it moves through the Atlantic, the Pacific and the Arctic. This is a big story and it’s another case where the government was trying to protect corporate interests by having the government scientists take the side of corporate interests.

Farron Cousins:                  Well and let me just add real quick because I did the math on this. Based on the original estimates, the low number estimates that we now know are about 30% too low, we’re looking at 2,270 gallons of oil per square mile in the Gulf of Mexico and you add about 30% onto that and that’s where we are ten years later.