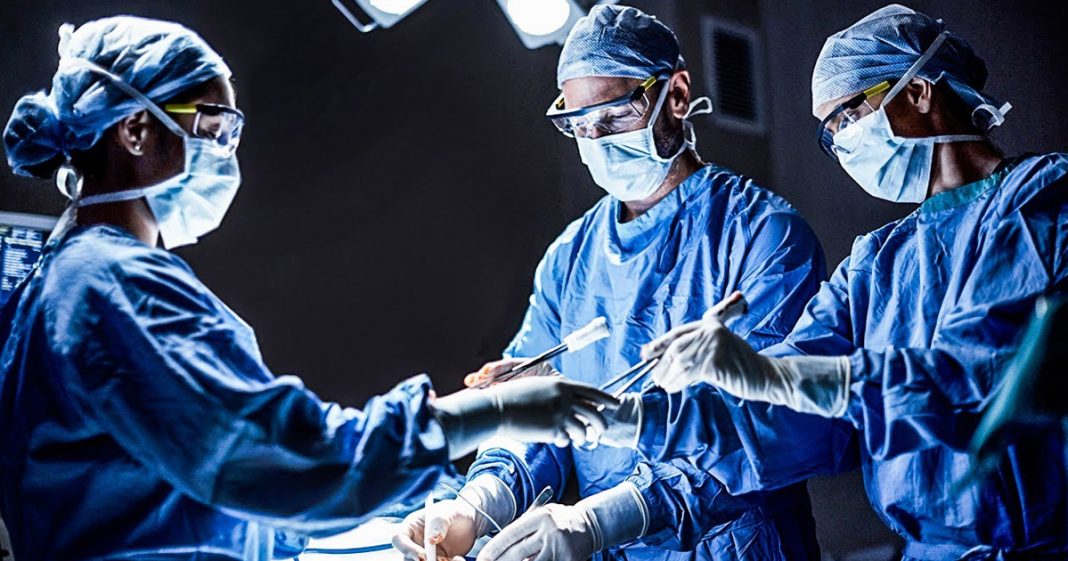 A new study from researchers at several universities proves once again that Medicare For All is the best path forward for America. Not only would the program save the country $450 billion every single year, but it could help prevent as many as 68,000 deaths per year. The answer is clear: If you want to save both money and lives, Medicare For All is the only choice. Ring of Fire’s Farron Cousins discusses this.

A remarkable new study came out this week from researchers at Yale University, the University of Florida, and the University of Maryland. And they found that if we switched from our for profit healthcare system to a Medicare For All system here in the United States, we would save roughly $450 billion per year. Average savings to the American family would be roughly $2,400 per year. So you, your family, you get 2,400 extra dollars in your pocket each year, which is more than any of you out there who aren’t in the top 5% are getting from the Republican tax cut, by the way. As a country, we’re saving overall $450 billion. That’s $450 billion that can be spent on other things to help boost the economy. And when added with other information from other studies, we also find out that Medicare For All could save as many as 68,000 lives each year. So I think the question is very simple.

Do we stick with the current program that costs us hundreds of billions of dollars a year? Denies people care, forces them to ration their medicine and due to a lack of care or lack of coverage, 48,000 people a year die. Or do we say $450 billion a year, save 68,000 lives per year, and every single person in this country can go to the doctor whenever they want for whatever they want to go for? That’s a no brainer. It’s such a no brainer that you would either have to be stupid or paid off to not pick the Medicare For All option. I’m sorry, but that’s what I’m going with right now. If you don’t support that plan, it’s either because you have no understanding of what’s happening in the world or two, you’re being paid to not support it. Those are our options at this point, folks, because study after study after study, including the Republican funded studies, by the way, if we all remember the ones from the Koch brothers, every one of them says it saves us money. Every one of them says it saves lives. Again, including the ones Republicans tried to put together to show how bad it was. They accidentally showed how great it was. $2 trillion savings over 10 years, according to the Republican study.

There, there’s no other way to slice it. This conversation should be over. Medicare For All is the only path forward for this country. Now let’s address some of the criticisms of Medicare For All real quick, right? Okay, well we’ve already addressed the price and the coverage issue because it saves lives and saves money. So those two things are out the window. If you bring those up, you’re arguing in bad faith because they’ve already been disproven. Now another thing that came up in a recent Democratic debate is what about all those poor people working in the insurance company, right? Health insurance companies would probably go under, obviously if we switch to Medicare For All. So what about all those employees? And to that, I have a simple question. What do you think’s going to happen with Medicare For All, who’s gonna run it? Right? This would have to be a massive nationwide program.

There would have to be field offices all over this country. There would have to be a big government agency dealing with this. Who do you think is going to staff it? Do you think they’re just going to put out ads on Craigslist and say, hey, want Medicare For All? Come work for us. No, probably what’s going to happen, because this would be the only smart thing to do, would be to pull people from the health insurance industry who already know what the heck they’re doing. You give them good, decent government jobs, good paying jobs that support a healthy middle-class. That’s where those people go. Obviously you cannot take all of them, so yeah, there’s going to be a little bit of a transition. There’s going to be some people without jobs, but I’m sorry. I would rather see, and perhaps the government could even offer some kind of severance package and program, you know, to help these people till they find a new job so that nobody’s destitute. That’s also an option, a very easy option. But nonetheless, I hate to say it this way, but I would rather see a couple thousand people have to go look for a new job than 48,000 people die. Maybe that’s just me. Maybe I’m crazy for thinking that, but I think a few thousand people having to go find a new line of work is a better option than buying 48,000 coffins for people’s loved ones.