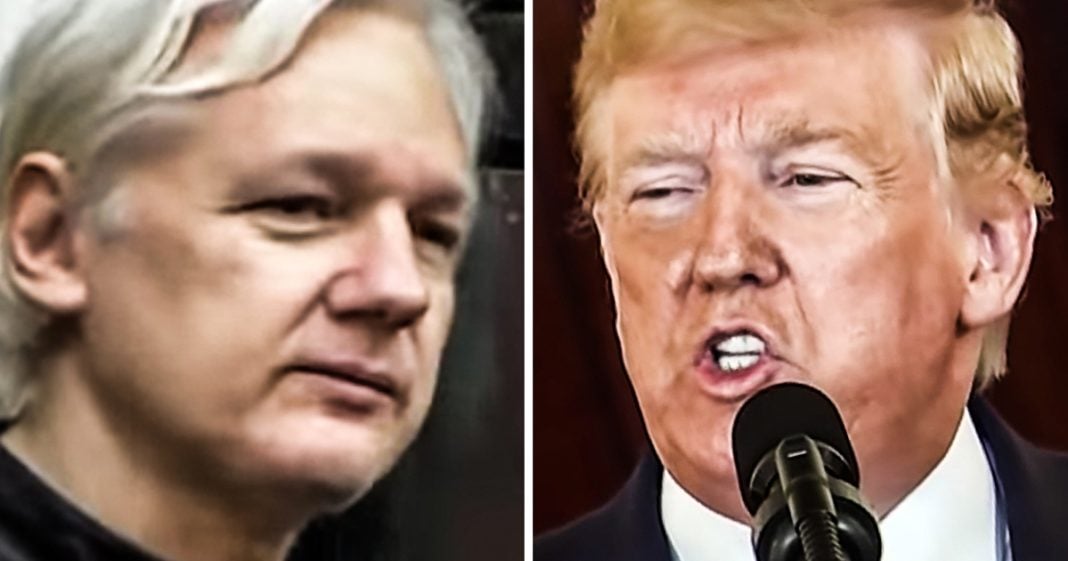 According to Julian Assange’s lawyers, Assange was promised a presidential pardon by a Trump associate if he was willing to lie about the Russian involvement in the DNC hack. We know that the hack originated from Russia, and Trump knew that this information would make him look bad, so he allegedly wanted Assange to lie about the source. Ring of Fire’s Farron Cousins explains what’s happening.

Yesterday, Julian Assange appeared in a British court via teleconference, about his pending extradition case. And one thing that Assange and his lawyers told that British court was that Donald Trump dangled a pardon in front of Julian Assange if and only if Julian was willing to come out publicly and say that Russia had nothing to do, was not involved in any way, with the hacking of the DNC. Obviously Julian Assange did not do this. And they’re not saying that Trump directly talked to Julian Assange. No, what happened according to reports, is that in 2017, GOP lawmaker Dana Rohrabacher, reached out to Julian Assange said that he was, you know, working on behalf of Donald Trump. We might be willing to do this pardon if, you know, kind of the whole quid pro quo thing, if you’re willing to come out there and say that Russia didn’t do this. And of course this was at the time when everybody thought Donald Trump was acting as an agent of Russia.

And so the DNC hack being tied to hackers in Russia, which is a thing that happened, folks. This isn’t Russiagate conspiracy talking or a new Red Scare. That is true. Okay. That was proven. The hackers were in Russia. That doesn’t mean they were working for the Russian government or that they did it because they were Russian. That’s just where it was. But Rohrabacher allegedly asked Assange, could you just say that it wasn’t? If so, we could probably work out a deal here. You know, I’m good friends with Trump. I talk to him all the time and he wants me to tell you this. That is what was presented to the British court yesterday. Now again, I am not the kind of guy who sees Russia every time something goes wrong in the United States. We see those people. There are hardcore Russiagaters who every time something goes wrong, Russia, Russia, Russia, they are like that. But I’m also one of those people who looks at the facts and says, wow, Russia did in fact interfere in 2016. That’s bad, and we need to make sure it doesn’t happen again.

See, you can believe both things. You cannot think that Russia is the biggest boogeyman on the planet that’s behind every horrible thing in your life, but you can also understand that, yeah, they interfered in 2016. That doesn’t make me a crazy conspiracy theorist. It just means I see the evidence of it that has been presented to the United States. So that’s where we are kind of here in the middle where it’s like, yeah, they did it, but that doesn’t mean they’re doing everything else on the planet. Can we stop acting like they’re out there to get us every time we run a stop sign. Anyway, don’t run stop signs. What Julian Assange has alleged here is huge and it again yesterday resulted in people online and, you know, newspaper headlines, impeach him again. Let’s get Donald Trump for this. Now, I disagree with that. I think this would be a very flimsy case for impeachment, but I also want to take the time to say that, yeah, this shows how far Donald Trump was willing to go to downplay the Russia ties that his campaign may or may not have had and that makes him look bad. As for Julian Assange himself, I do not think this man should go to jail for these things. I do not think he should go to jail for anything that WikiLeaks has done.

Yes, they may have broken some laws hacking into machines, you know, across, across the world really. But at the same time they have released vital information. It doesn’t matter your opinion of WikiLeaks. It doesn’t matter their political leaning or the political leanings or your personal feelings about Assange. He is out there releasing information that the public does in fact need to know. It’s not always pleasant. It may not always fit into our political beliefs, but he is providing a necessary service. Prosecuting him, prosecuting WikiLeaks, is going to lead to the prosecution of more journalists, more whistleblowers and more people who are just out there trying to tell us what’s really happening. I do not support the prosecution of Julian Assange at all. But I also do not support the president dangling a pardon in front of people to try to get his way. That is something that does in fact need to be investigated. But unfortunately, given the timing and the failure of the last impeachment taking it as far as launching another impeachment inquiry, that might be a little much. Congress needs to look into this and we need to find out the truth and hopefully at the end of all this, we’ll find out not only what happened, but that may be prosecuting Julian Assange isn’t the best path forward.