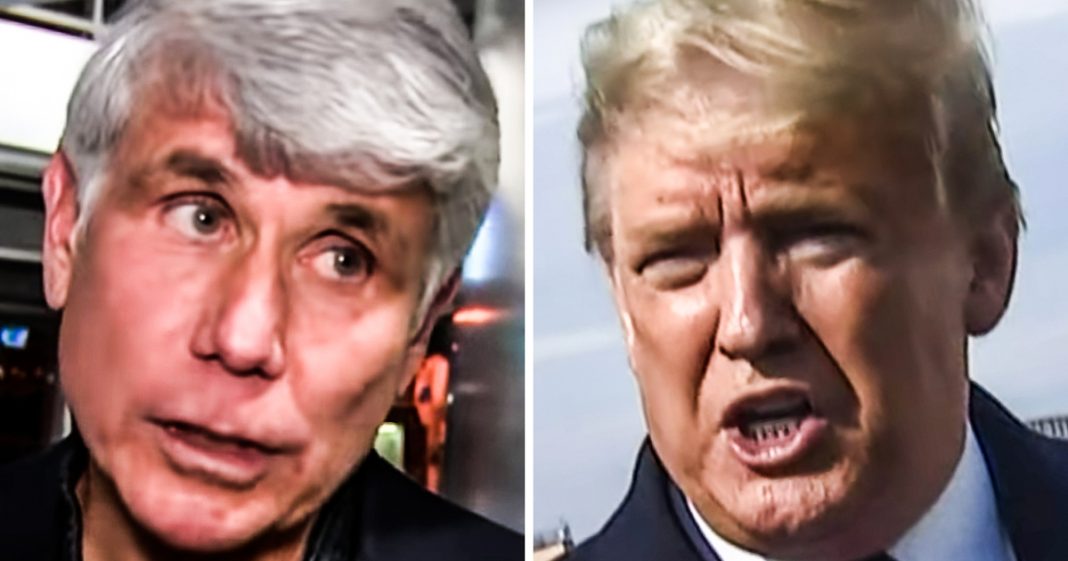 Donald Trump issued a flurry of criminal pardons yesterday, and nearly all of the people who received pardons have the same common thread – they are white collar criminals who either attacked Trump’s enemies or they’ve given LOTS of money to his campaign. The message that the administration is clear: If you are a friend of Trump, you can get away with anything. Ring of Fire’s Farron Cousins discusses this.

Yesterday, Donald Trump decided to go on a pardon and clemency spree, where for the most part, he decided he was going to either pardon or commute the sentences or grant clemency to a bunch of rich white collar criminals. Those criminals included former Illinois governor Rod Blagojevich, who was accused and convicted of essentially trying to sell Barack Obama’s former Senate seat. You had former police commissioner, Bernie Kerik. You had financer, Michael Milken who became the face of financial fraud during the 1980s. You had the former owner of the San Francisco 49ers. You had one of Jack Abramoff’s buddies by the name of Safavian in there too, just a bunch of people guilty of some kind of financial crime or another. Now that’s one of the things that a lot of these people had in common, but another thing that they had in common was the fact that recently many of them had either gone on TV or had one of their surrogates go on TV to attack Donald Trump’s enemies, or they’ve just straight up given a lot of money to Donald Trump and his campaign.

Let’s start with Blagojevich. In the last couple of weeks, his wife Patti has been going on a media blitz attacking the prosecution of her husband and comparing it to the so-called witch hunt led by Robert Mueller against Donald Trump. Donald Trump saw this on TV. He liked it. He liked that Patti was saying this whole thing was a witch hunt and Donald Trump was unfairly persecuted for all of this, and so then he decides to go ahead and pardon her husband and Blagojevich is super happy. He says, Donald Trump, he’s got a, he’s got a friend and a supporter in me is what he said after all this took place. Then of course you had Bernie Kerik also guilty of some financial crimes, and Kerik had been going on Fox news recently, most specifically Tucker Carlson’s program to talk about how unfair the prosecutors and investigators have been to pour little Donald Trump.

And then of course Milken, Milken has not been going on TV talking about how unfair Donald Trump has been treated, but a good friend of his did recently hold a $10 million fundraiser for Donald Trump. And not to mention the fact that Milken is good friends with treasury secretary, Steve Mnuchin. So that probably played a pretty big role in Milken’s pardon as well. Here’s this thing, 11 people were pardoned yesterday, three of them on drug offenses, and those are the ones that nobody’s really talking about. But it should have been more people for random stupid drug offenses and none of these white collar criminals. I mean, these people that Trump is pardoning, committed very real crimes. Some of them could have faced decades in prison. Luckily they didn’t get sentences that harsh, but that is how severe these crimes are that they committed. Meanwhile, these random drug offenses, no other victims, just people arrested for having drugs on them, using drugs, maybe selling drugs. Okay.

But we’re at a point in society where we’re starting to learn that maybe drugs aren’t the most dangerous things ever, and that we are unfairly prosecuting people for drug offenses. Meanwhile, these white collar criminals, Kerik, for example, served three years, I think. He was facing several decades in prison. So Kerik wasn’t even in jail anymore, right? This was all over with. Blagojevich got a lengthy prison sentence. He wasn’t going to be released until 2024. Milken served about 10 years in jail and he should have served a heck of a lot longer than that. But these men did not need clemency. They did not need these pardons. They needed to do the time and they needed to live with that stigma. The drug offenses, on the other hand, these are crimes that we created ourselves with our, with our foolish drug war, and our tough on crime stance as a nation or you know, the crime bill that Joe Biden famously supported. These people were persecuted and then prosecuted. These other men got away with too much for too long and made too much money on it, and now because they’re either willing to pass some of that money to Trump’s campaign or to go out there and make fools of themselves to support him, they get to walk free.