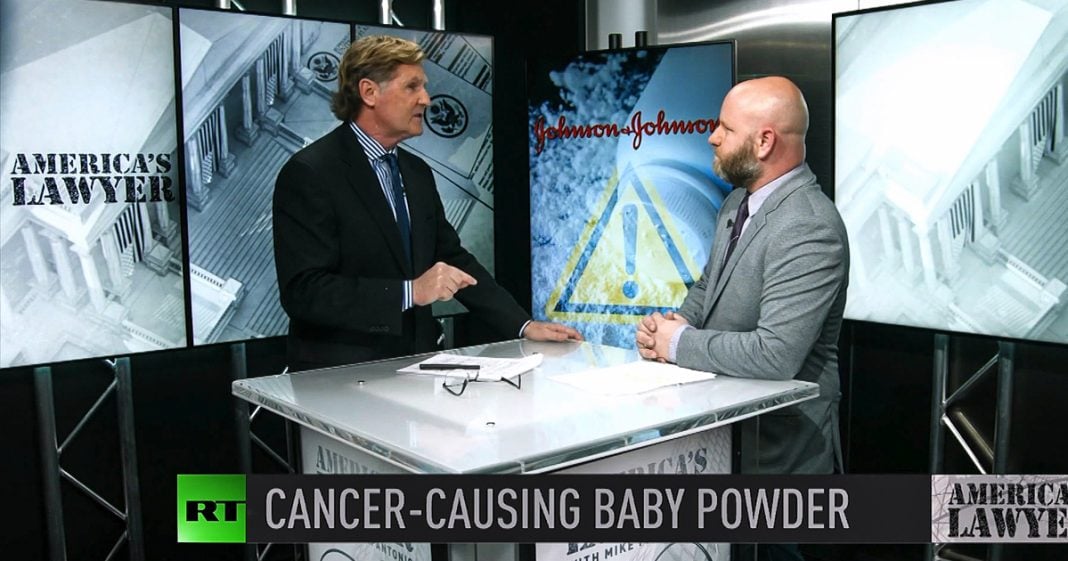 Via America’s Lawyer: MSNBC has been showering Joe Biden’s presidential campaign with money. Also, the “family company” Johnson & Johnson has just been hit by a $750 million fine in New Jersey for their cancer-linked talcum-based baby powder. Mike Papantonio and Farron Cousins discuss.

Mike Papantonio:             If you’re wondering why, by the way, that MSNBC loves to trash Progressive’s like Bernie Sanders, just take a look at where their executives are throwing all their money. This story, I don’t know how somebody following elections would not know this story and that is that Comcast has, has, has centered so much money around their guy Biden. Okay. It was Biden and now I’m wondering. Yeah, what does he come out a couple of days ago and calls somebody who’s talking to him a, a dog, a lying dog-faced pony soldier.

Mike Papantonio:             What in the hell is that? I don’t even know what it is. But okay, so this senile old guy calls somebody who’s just asking him a question, she’s asking him a question. But, but MSNBC is so into Bernie, I mean, so into Biden right now because they spent so much money on him. Tell the story about Comcast.

Farron Cousins:                  They do great investigative reporting and what they’ve found is that Joe Biden, not just in this election cycle, but basically throughout his whole career, can count on Comcast to consistently give him money. It’s the seventh largest contributor to his campaign since 1989. They have poured more than $150,000 into Joe Biden. He kicked off his campaign with a Comcast executive right there standing next to him. He is the Comcast candidate and therefore he is the MSNBC candidate because that’s the one they’re paying.

Mike Papantonio:             Comcast wants to destroy net neutrality. They don’t want, they don’t want mom and pop to have the same access that they have to the net. Yeah. They don’t want that. So from the very beginning, senile man here has made the promise to them, I will do that for you. Get me elected, Comcast, and I will do. It’s just, it’s an exchange of money. That’s all it is, is it’s an exchange of money. But they’re finding it tougher and tougher to support the guy when he comes out and says things like, you know, little girl, you’re a lying dog-faced pony soldier. I don’t even know what that means.

Farron Cousins:                  So this is again, I guess a thing he does. But, Biden throughout his career has consistently voted with Republicans and against the rest of his Democratic pals when it comes to things like corporate mergers.

Mike Papantonio:             Because they were tired of that little freak, Phil Griffin, telling them what they must say, and this is about money. They have to support this guy, even though he is so far out in left field, they got to support him anyway.

Farron Cousins:                  Well, and another thing though, about this whole Biden MSNBC thing, is it’s not just that they promote Biden more than they promote everybody else, but they bring on these hacks to trash Bernie Sanders at any given opportunity. Absolutely make stuff up. You had Chris Matthews a couple of days ago, said Bernie Sanders wants to round people up in Central Park and execute them. You had Chuck Todd refer to Bernie’s followers as the new Brown Shirts the other day.

Mike Papantonio:             Their brand is, we will say whatever Andy Lack and Phil Griffin tells us to say without really being a journalist. And these are people we’ve worked with.

Mike Papantonio:             I mean, I gotta tell you something, we have worked with a lot of these people and we’re seeing this, you know.

Mike Papantonio:             They’re sending out their flying monkeys. That’s what, the flying monkeys are on every night trying to get this guy elected. He has zero chance, zero. He’s like an old man who’s fallen down the stairs. As Van Jones says, he can’t get up. It’s time for him to use his 911 button and nobody’s told him that he has a 911 button.

Mike Papantonio:             Johnson and Johnson was hit with another massive verdict last week over claims that their talcum powders are causing cancer. Okay. You’ve written how many articles about this? You’ve done how many stories? Friend of mine got this verdict, Chris Placitella, an extraordinarily talented lawyer. He and I used to try cases together in the early, early asbestos days. He, he hit them for $785 million. And so you got Johnson and Johnson that in a day lost fifth, $40 billion worth of value in their shares. Right? $40 million. Take the story from here.

Farron Cousins:                  And so this one’s a little bit different because this time Placitella gets up there, he says, you know what, we’re going to bring out chief executive. We have Alex Gorsky.

Farron Cousins:                  And when that jury delivered their verdict, Placitella said it was obvious they were delivering that verdict of you did this and you’re going to pay up directly to Alex Gorsky.

Mike Papantonio:             Okay. Let me talk about this just a second because I’ve been in cases where the, where the trial judge treats the CEO like they’re some kind of special character that you can’t bring into a courtroom. This judge said, uh-uh, you, you’ve killed people, basically. I mean, they’ve killed people. They knew asbestos was in their product. They knew that asbestos causes cancer. They had done their own studies that said, we’re worried about this in the 1950s. They understand exactly what’s happening and nevertheless they say, well, we don’t want to bring our CEO, our CEO has some special privilege that he doesn’t have to come to court of law. Chris Placitella said, really? Let’s see how that floats in front of the judge. The judge did what the judge was supposed to do, bring him here, put him under cross examination and that’s exactly what happened.

Farron Cousins:                  Well, and that’s what needs to happen in more of these trials as well. We need not just, you know, the, the scientists or maybe, you know, with some salespeople, we need more executives on the stand. So that people can see one, either that, yeah, this cover up when all the way to the top or two, they could see what incompetent morons a lot of these CEOs are who have no idea what’s happening in their own company. That’s what we need to see.

Mike Papantonio:             But should a trial judge ever prevent somebody, a plaintiff, from saying that CEO needs to be in this courtroom? I need to ask that CEO that question about what they knew or didn’t know. I need to cross examine them just like I could anybody else. Where do we get this idea that they have some special dispensation because they’re in an Armani suit. They wear a Rolex watch, they drive a Bentley and they’ve got an MBA from Harvard. Why is it that we treat them any different than a, than anybody else that has to show up in that courtroom?

Farron Cousins:                  Well, because a lot of areas in this country, you have judicial elections, at least at the smaller level as these judges work their way up, that are funded by corporations. And that’s the part of the story most people don’t even understand is that local judges, for the most part across this country are elected. And anytime you have an elected position, you can find corporate money and they don’t have to spend much. They spend $5,000 in an election to buy a judge.