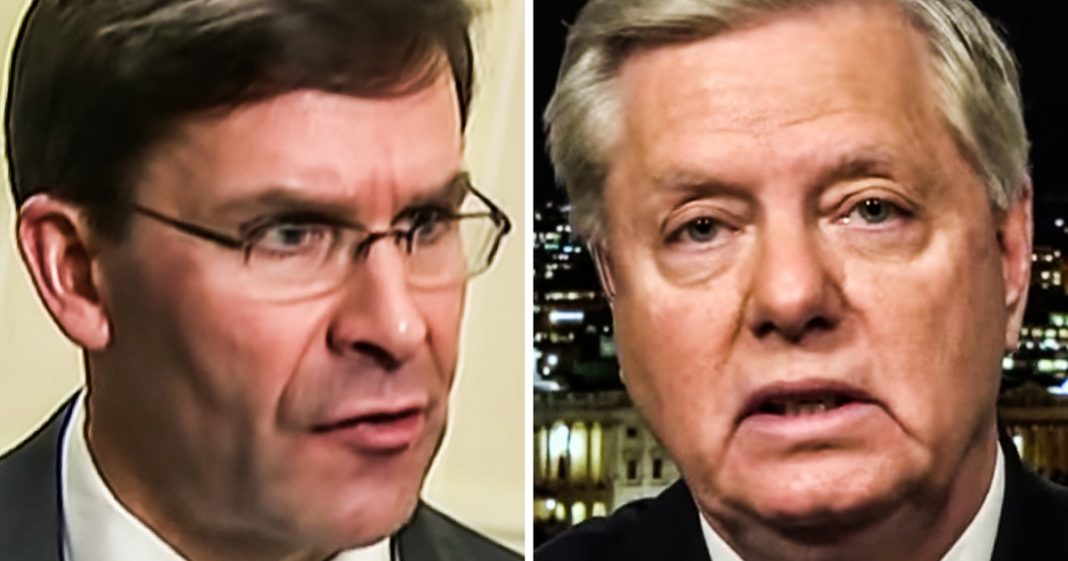 According to reports, Republican Senator Lindsey Graham has some harsh words for Defense Secretary Mark Esper, allegedly threatening to make the Pentagon chief’s life an “absolute hell” if he followed through on his plan to withdraw U.S. troops from Africa. Esper has said that there’s no money in the budget for this pointless gesture, but Graham won’t allow the U.S. to NOT have soldiers on every possible continent. Ring of Fire’s Farron Cousins discusses this.

Last week at the Munich Security Conference over in Germany, Republican Senator Lindsey Graham allegedly told secretary of defense, Mark Esper, that he would “make your life hell” if Esper followed through on plans to withdraw US troops from West Africa. Lindsey Graham absolutely denies all of these reports saying that he would make Mark Esper’s life hell if he withdrew troops from Africa. But he also reaffirmed that we got to keep our troops over there in Africa because, you know, Russia’s over there, Lindsey Graham says, and China’s over there. Now I’m going to go ahead and admit something here. I am not super familiar with the politics of Western Africa, right? I don’t know a whole heck of a lot about what’s going on over there, but based on news stories that we see, based on studies and reports, the US military really does not have a whole heck of a lot of business being over there in West Africa. And as much as I think Mark Esper is a horrible human being and he’s really bad at his job, this would be a smart decision to pull US troops out of West Africa.

After all, Donald Trump himself has said that the United States can’t be involved in these forever wars, wars that have no goal with no end in sight and from what we have seen that might exactly be what US troops are engaged in over there in Western Africa. And for what? Why? Well, according to Lindsey Graham, we gotta stop terrorists. You know, we’ve got to have a military presence there so that these terrorist groups don’t take hold. Okay. I mean, sure, fighting terrorism is, is a thing that we all have to do, but it’s also a thing that we have to do as a globe. This is not America’s unique position to go out there, occupy other countries and spend billions of dollars just to have our troops there just in case. Yet, that is exactly what is happening in these areas. As for his threats of Russia and China coming in there, okay, what are they going to do? What are Russia and China going to do? Are they going to take over Africa, Lindsey Graham? Is that what you’re concerned about? Because I simply just don’t see that happening.

Yeah, there’s a lot of geopolitical problems in Africa. There’s also a lot of them in South America. There, there is happening in Asia. You know, in the Middle East, even here in North America. How about we start working on our own problems rather than telling other people how to work on theirs. Lindsey Graham wants endless war. Lindsey Graham can only feel like an accomplished individual, or dare I say even a man at all, if he knows that he has helped to spread US troops across this planet. Lindsey Graham believes in nothing less than United States imperialism, and he will fight tooth and nail, and as the reports say, he will make your life a living hell if you try to take that away from him. And that is exactly what he is threatening to do to the chief of the Pentagon.