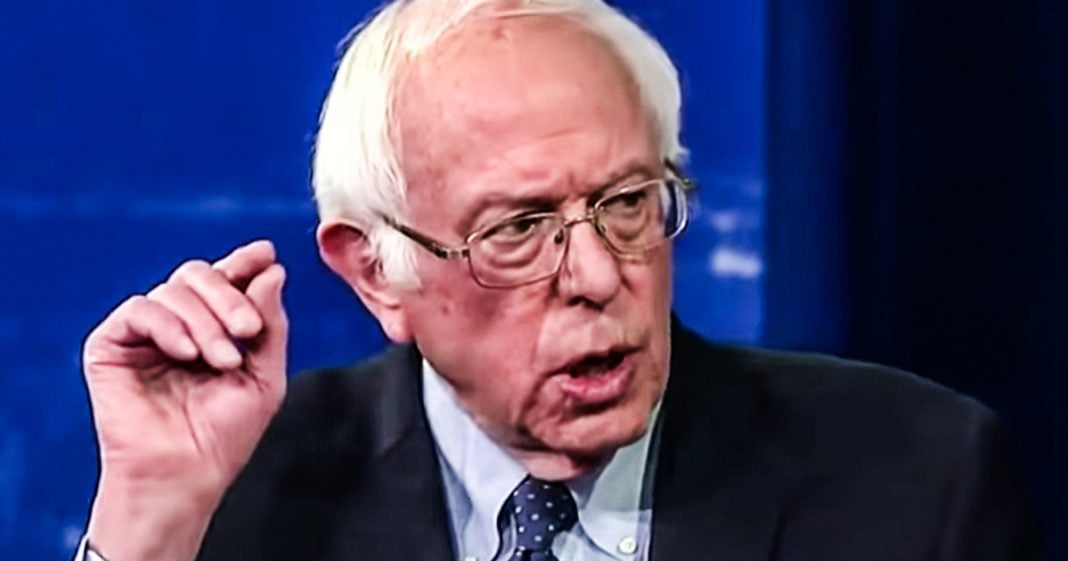 Bernie Sanders is still on the rise, while nearly every one of his competitors continues to fall in the polls. The exceptions are Michael Bloomberg and Amy Klobuchar who have enjoyed a rise in their numbers – although Klobuchar is still trailing with little to no path to the nomination. Bernie is the person to beat, and it doesn’t look like any of the other candidates have any idea how to do that. Ring of Fire’s Farron Cousins discusses this.

Well folks, we got some new polls yesterday and they show that Bernie Sanders now has a commanding lead nationally among all the Democrats running for president. Bernie Sanders now leads them by double digits, clocking in at 31% of the overall support in this latest national poll. The person in number two however, is no longer Joe Biden. At 19% number two is Michael Bloomberg. Now Bernie is still 12 points ahead of him in this poll and Bernie has risen nine points since this poll was last conducted in December. Biden is number three at 15%, his support has fallen nine points since December. Elizabeth Warren is number four. She has 12%, she’s down five points since December. Klobuchar is next at 9%, she is up four and then there’s Buttigieg who rounds out at the bottom with 8%, down 13% since December. Now I’m going to talk about Bernie and Bloomberg and Biden and all of that, but I want to focus on Buttigieg for just a minute here because this is actually remarkable that he has lost 13 percentage points since December. Is now at the bottom losing to Amy Klobuchar in spite of the fact that he had very strong showings in both Iowa and New Hampshire, he did exceptionally well.

I mean, he tied with Bernie in terms of delegates because he did so well. So why is it that Bernie is rising and Buttigieg is apparently in a free fall at this point? Maybe it’s because the actual support for Buttigieg isn’t quite real. And what I mean by that is, sure the guy can go to these exceptionally white States and do very well, but beyond the whiteness in this country, Buttigieg just simply is not making a connection. I mean, the man has repeatedly lied about the support that he is getting from African Americans, happened again just the other day. That’s not good. He doesn’t poll well with Hispanics, doesn’t poll well with African Americans. People aren’t buying what he’s selling mostly because they don’t even know what he’s selling. Meanwhile, Bernie Sanders is actually surging with African American voters and with Hispanic voters. He is now second to Biden in African American voter support. However, he is now within the margin of error enough to consider this a statistical tie and that was the group of voters that establishment Democrats had told us just a few months ago, Bernie Sanders is never going to win that group. He is never going to get support outside of the white community. He is never going to get support among women.

Except Bernie’s now leading among women too. Bernie’s support is very real. He is almost at this point leading in every demographic, right? This poll is not an outlier. This poll is the new reality and that’s why we also have to take the rise of Bloomberg very seriously and not in a good way either. Bloomberg bought his way into this race and has now bought his way into being second nationally. Now tonight he is going to be on that debate stage and he is going to have to answer for all of these horrible clips we have seen emerge from him in just the last week. Hopefully, it’s an MSNBC debate though, so they may not even ask those questions. They may focus all their energy attacking Bernie since he is now officially statistically the front runner, as I mentioned in almost every single demographic here in the United States. What’s more, there were stories that came out yesterday that also showed that average democratic voters out there in the United States have no problem with Bernie.

They’re not turned off or offended or even really engaging with those so-called Bernie bros online. Those lines of attack don’t work. They don’t care. They don’t see it, and it’s not something that even concerns them when they do know about it. They’re not concerned that he describes himself as a Democratic socialist. They’re not concerned that his policies may be too far left as the establishment tells us. They like him and that’s a problem for the establishment because they don’t know how to fight that. They don’t know how to fight genuine enthusiasm, which is what Bernie Sanders has today. That is what he is enjoying among the American public, genuine support. It’s not support like what Michael Bloomberg has that was bought and paid for. It’s not support just because you’re the only one who can afford to run ads in every state across this country. It’s not support for being a fresh young face and up and comer like Buttigieg once had. He does not have that anymore. He’s not wishy washy like some of these other candidates. He’s not crazy like Joe Biden. He’s just out there talking about the issues and guess what Democrats, that works and Bernie Sanders surging poll numbers are proof of that.