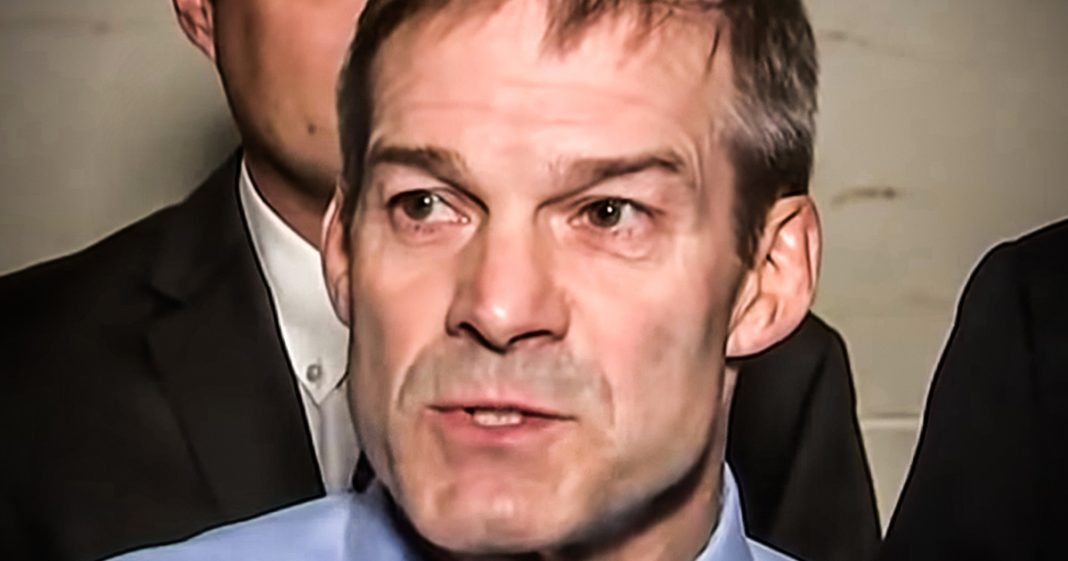 Republican Representative Jim Jordan was given a very ominous warning by a former Ohio State wrestler just a few days ago who said that the dam is about to break and new information directly related to Jordan is about to come out. Jordan was already directly implicated in the cover up by another wrestler just last week, and apparently there is still more to come. Ring of Fire’s Farron Cousins discusses this.

Over the weekend, former Ohio State University wrestler Adam DiSabato, appeared on MSNBC’s AM Joy with Joy Reid to talk about his revelation this past week during a state legislature hearing in the state of Ohio where he mentioned that, yes, Republican representative Jim Jordan, who was an assistant coach at the wrestling team during the time that all the abuse was taking place at the hands of Dr. Richard Strauss. He said that yes, Jim Jordan was part of the cover-up and on the 4th of July, this, two years ago actually, Jordan called him crying and begging him to retract his brother’s statement saying that Jordan was involved in the cover-up. So Joy Reid has him on MSNBC and DiSabato does point out that, yeah, that phone call happened. I know Jim Jordan’s out there calling me a liar, but it happened, you know, we have records that the phone call happened. Those are very easy to produce this day and age.

But he also teased something a little more. He said, I’ve already gone over this several times. I mean, it was blatant knowledge throughout our wrestling team and there’s others that are going to come out on my behalf and it’s just going to get worse. Now, then he moved on and he talked about the fact that this goes beyond Jim Jordan because DiSabato wants to make it clear, just like he made clear in his hearing last week, I’m not here to just implicate Jim Jordan and talk about how bad of a person Jim Jordan is. But Joy Reid wanted to keep talking about Jim Jordan so she goes back and asked him again, we’ll hold up now. You just said more stuff is going to come out and it’s going to be really bad for Jim Jordan. Is this true?

You know, do you stand by that? And he said yes, there is more that is going to come out through the pipeline and yes it is going to be bad for Jim Jordan. It’s also going to be bad for everybody else involved in this cover-up. But see to me this is what gives DiSabato so much credibility. Yes, he has said bad things about Jim Jordan, but he is making it abundantly clear, I don’t want to sit here and talk about Jim Jordan. This isn’t about Jim Jordan. This is about years of abuse that took place at Ohio State and it goes all the way up the top. Jim Jordan was just one of many people charged with protecting this team who failed to do it and helped cover it up. You know, he named other names too in this interview, other coaches, other athletic directors.

Those people also deserve scrutiny too, but they don’t get it because Jim Jordan is one of the only high profile people mentioned in this specific scandal. So yes, Jim Jordan does get a lot of attention and yes, he does deserve it, but we have to remember what DiSabato was telling us here. There are others involved in this. There were young men who had their lives just crumble because of what happened at the hands of this team doctor and it’s happened to women athletes at other schools. It’s happened to male athletes at other schools. This has happened too much in this country. This is an epidemic and something has to happen. The doctor passed away long time ago. There is no chance to hold him accountable. But for people like Jim Jordan and all of the other coaches and the athletic directors and the highers up, higher ups at Ohio State University, it is not too late to hold them all accountable. And that is what DiSabato and his fellow wrestlers are trying to do.