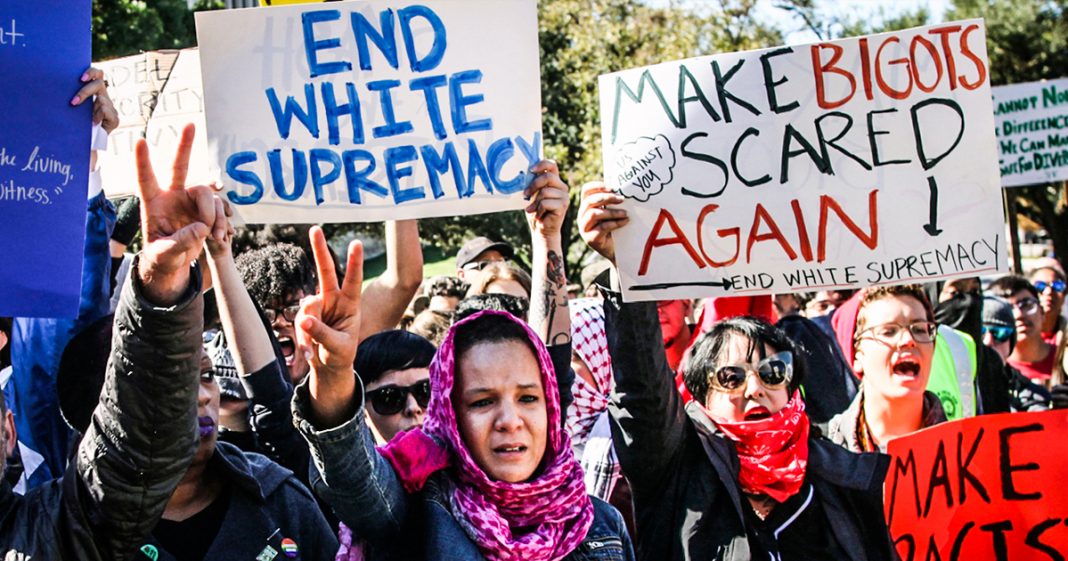 According to new research, white nationalist literature and other forms of propaganda actually INCREASED on college campuses last year. Part of the reason is that colleges are allowing more and more nationalistic speakers and organizations to appear on campus, giving students the impression that these views are legitimate. Ring of Fire’s Farron Cousins discusses this.

According to new data compiled by the Anti-Defamation League, instances of white nationalist propaganda on college campus, campuses nearly doubled last year alone. There was a 96% increase in the amount of white nationalist propaganda and literature reported by colleges for the year 2019. Here’s what this means. You had 433 schools in 43 different States that reported incidents of white nationalists actively trying to spread propaganda on their campuses. And this comes in spite of the fact that the number of appearances and forums that these colleges allowed white nationalists to go out there and hold on their campuses actually declined last year. But they still happened and that’s the problem, folks. When you allow, when you’re a public university and you give a platform to somebody who comes to your organization to somehow, maybe in coded language, maybe not in coded language, but somehow say that white people are better, there’s going to be propaganda that follows that. And conversely, and this is even worse, when you don’t allow those people to come out there and speak more propaganda comes because it’s just kind of fueling the fire.

So we, the people who want to fight white nationalism, we’re kind of stuck between a rock and a hard place. How do we handle this? How do we fight back against this? Because anytime a white nationalist is not allowed to come and speak on a college campus, that becomes the headline. Oh, they’re not allowing differing views. Oh, they’re not allowing somebody who says that immigrants shouldn’t come in. This is a, you know, the speech police, it’s a violation of our first amendment rights. Fox news runs wall to wall coverage of this and it glosses over the fact that the person may be in fact a white nationalist. And when you drum up those concerns saying, well, they’re actually just trampling on our first amendment has nothing to do with this person’s beliefs. They’re trampling on the first amendment.