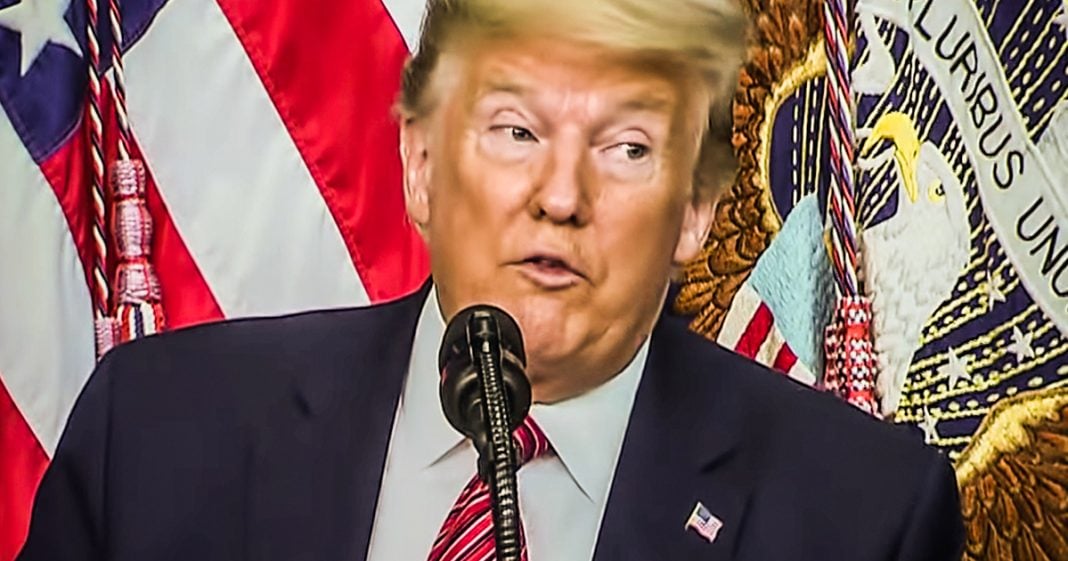 In an early morning Twitter rant, Donald Trump decided to reopen the Mueller investigation by claiming that the entire thing was tainted, and then he suggested that he might actually sue the people who carried out the investigation. This would be one of the dumbest things that Trump could do. He already got away with crimes, so why would he want to bring this back to the public’s attention and open himself up for more damaging info to be released? Ring of Fire’s Farron Cousins discusses this.

Apparently Donald Trump woke up furious this morning and he did what he always does when he’s angry, he pulls out his giant phone and he gets on Twitter to start yelling about things and one of the things that he yelled about this morning was the Mueller investigation. Even though that investigation wrapped up 10 months ago, Donald Trump is still furious about the results of that. He claimed that the investigation was tainted, that it was somehow started on false pretenses, and then he suggested that he might sue everyone involved with the Mueller investigation because he’s so angry about it. Here’s the exact tweet. He said, the whole deal was a total scam. If I wasn’t president, I’d be suing everyone all over the place, but maybe I still will. Witch hunt. You’re right, bud, this is a witch hunt at this point. You’re trying to find someone, anyone connected to this investigation at any point that you can try to say, oh look, they didn’t like me.

That’s why this whole thing is, it’s bogus. It doesn’t work. This person was a Democrat or this person is a registered independent. They’re not a Republican. They do not lick my feet. They are not a good person and this whole investigation is tainted because of it. But here’s the thing about lawsuits, folks, and I don’t think a lot of people understand this. You cannot as a person or as an entity, just randomly go out and sue everyone for anything. You have to have standing. You have to have a cause, right? There has to be some kind of injury. If you do not have those things, you cannot sue.

I mean, you can go ahead and you can write it out and file it and the judge is going to take it and throw it out. It’s never going to be heard by anybody, which is exactly what would happen in this lawsuit if Trump actually did file it. And I got to say that’s a little disappointing because I want Donald Trump to sue. I want him to sue Robert Mueller. I want him to sue every single person at the DOJ who engaged in this investigation. Why? Not because I think it was a witch hunt. But because the lawyers who would have to defend all of these people, oh man, imagine the intelligence they’re going to get their hands on. All of that intelligence that the public still doesn’t know about would have to be released to these lawyers and be filed in court, which would then likely become public knowledge. See, Donald Trump is not an intelligent human being. He’s good at conning people. He knows how to do that probably better than anyone. That’s a form of intelligence, but when it comes to just knowing things, Trump doesn’t get it. Because there’s a little thing in lawsuits called discovery.

So if you want to prove an injury, if you wanted to sue and prove that Robert Mueller injured you or that any of the investigators or other lawyers working on this injured you, the other side would have the opportunity through discovery to get their hands on all these documents, all of the grand jury testimonies. Would be able to interview the witnesses who spoke to Mueller in private to find out what they were told so that they could make their case. And that wouldn’t end well for you. Let me put it this way. The Mueller report did in fact show that yes, the investigation was started in a perfectly legal manner, not based on crazy conspiracy theories that Republicans claim. Also, it directly implicated Donald Trump in multiple different crimes, most notably obstruction of justice. Also, it said that Russia did in fact interfere in the 2016 election and that they’re still doing it to this day and that we probably should take it seriously. Those were the findings of the Mueller report.

So yeah, Trump screwed up. Trump did bad things and his friends overseas are doing bad things to this day. And Trump wants to reopen the whole thing by suing them? That’s like if you’ve been drinking all afternoon, right, you start drinking at noon, you’re still drinking at 9:00 PM you get behind the wheel of your car, wreaking of alcohol, probably have one still in your hand and you get pulled over for speeding and the cop comes up to the window and he smells alcohol. He sees you holding a beer and he says, hey, you’re going kind of fast back there bud. I’m not going to give you a ticket. But, you know, keep it safe. Go along and you start driving again and you say, hold up. You know what? That man just slowed me down. I’m angry. Now I’m not going to get to my accident as fast as I thought I was. I’m going to go back and yell at him and call him an idiot. Trump, you got away with a lot of stuff, okay. They could have prosecuted you. They wanted to prosecute you for what they found in the Mueller investigation. So if I were you, buddy, I probably let this one go because it’s not going to end very well for you at all.