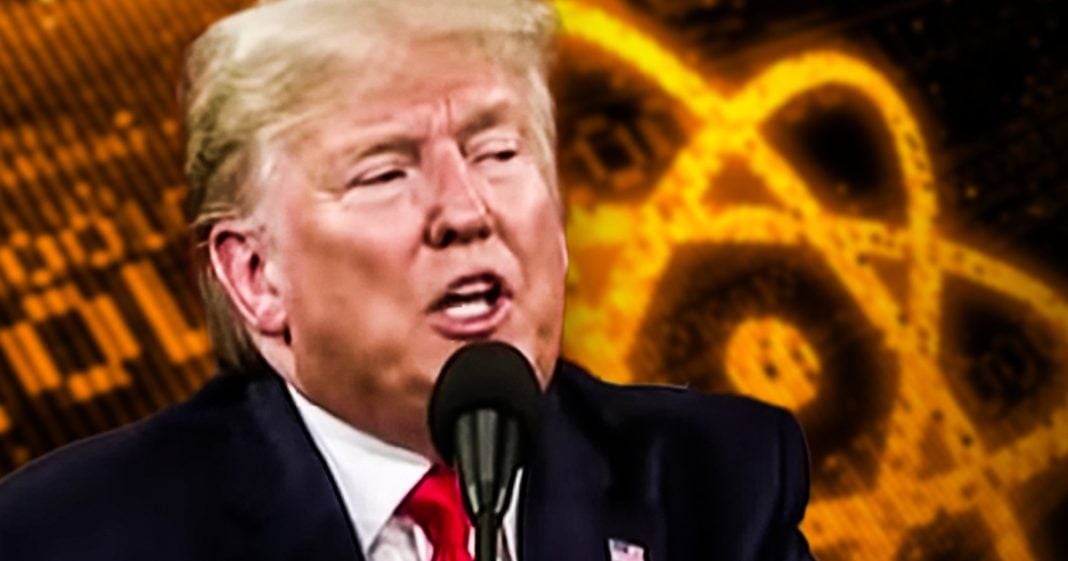 Donald Trump is planning on ramping up the U.S. nuclear arsenal by spending billions of dollars on new plutonium cores to build new nuclear weapons. The global arms race is once again in motion, and the only people who are going to benefit from this are the people who sell the weapons parts. Ring of Fire’s Farron Cousins explains what’s happening and why Trump is so obsessed with nuclear missiles.

Another piece of very scary information that was buried in Donald Trump’s 2021 budget proposal from last week is the fact that the president has allocated an additional $3.1 billion in that budget to start making new nuclear weapons. $3.1 billion on top of the $20 billion that the agency got the year before that he wants to use to build new plutonium cores to build new nuclear warheads. This is money that we as a country do not have that will be spent on something that we do not need or want. Everybody that is except for the military industrial complex people who profit and of course the president of the United States who has been obsessed with nuclear weapons since the day he stepped into office. We have heard reports that Donald Trump has repeatedly asked why we can’t just nuke a certain group of people who we don’t get along with. And now thanks to the fact that he has ripped up several international treaties that should be preventing the proliferation of nuclear weapons across the globe, Donald Trump says, full steam ahead. Let’s get that plutonium and make more of these weapons.

So here’s what’s going to happen. You’re going to have other countries, probably Russia, China, maybe some countries in the Middle East that see the US doing this and just like when we had the arms race in the 70s and the 80s they’re going to start doing the same thing. Because after all, why would you stockpile weapons? Why would you build new weapons of mass destruction unless you intended to eventually use them? Right? That, that’s what these weapons are for. We like to claim that they’re a deterrent, but what really happens is that we have them so that we can use them when the time comes. Honestly, at this point, I’m kind of shocked Donald Trump has not dropped a nuke on anybody. As it stands right now, the United States and Russia are tied in the number of nuclear weapons that we have, 1600 a piece.

Donald Trump doesn’t like ties does he? Except those big long red ones that he wears. He wants to be the King. He wants to be the nuclear King. He wants to go out there, parade these things around the streets of Washington, DC to show the rest of the world just how strong and tough we are, because that’s the only way we can measure it. Right? By how big our missiles are and how much money we’re sitting on. Those are the only two things that matter to a guy like Donald Trump. So now as we’re cutting Social Security, cutting Medicaid and Medicare and food stamps and scaling back the centers for disease control, cutting back on the EPA, this man instead wants to spend $23 billion building new nuclear warheads. Now according to the administration, part of this is because, well, some of the nuclear warheads we got out there are getting kind of old, you know, they’re not reliable. We got to replace them.

Except for the fact that nuclear experts say that these warheads we have created, the ones that are currently out there circling the globe on those submarines and warships that he just launched, they said, those cores are good for well over a hundred years. There is no need to worry about them. They’re not faulty. They’re not old. They’re still perfectly functional. There is no reason to even replace them. So, the administration’s lying about that. Donald Trump wants more nuclear weapons because it’s the only way he can feel like a man. That’s the only thing you need to know about this story. We’re starving the poor, taking money away from the elderly and denying healthcare to those most in need so that Donald Trump can feel like a bigger man for a few minutes.