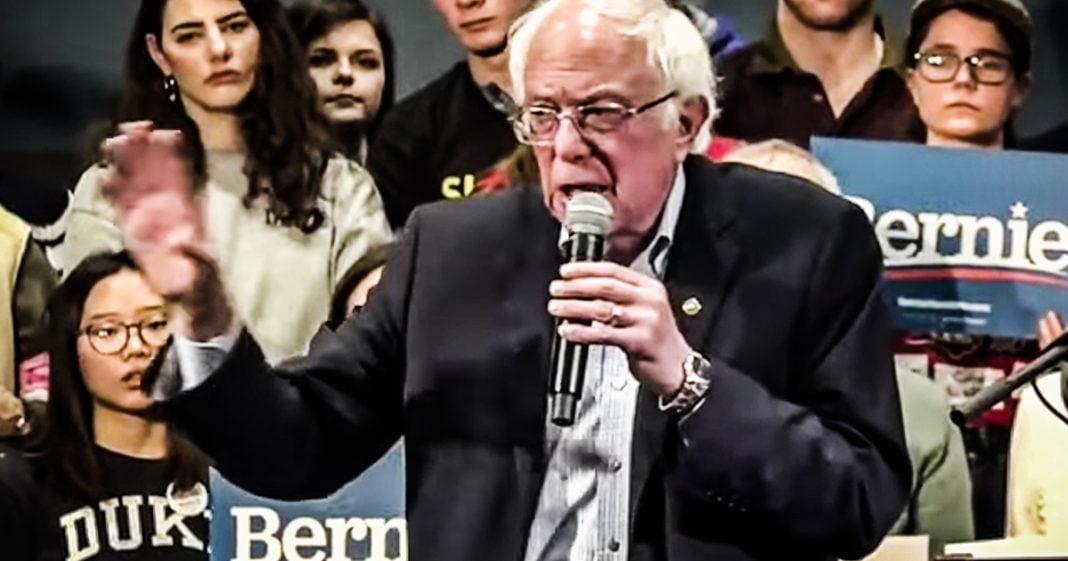 Republicans have been attempted to boost Bernie Sanders ahead of his Democratic rivals because they believe that he will be easier for Donald Trump to beat. Apparently these Republicans weren’t paying attention in 2018, 2016, and several other electoral years before that. Every time in recent history a party has tried to boost their opponent, it has backfired on them, and Republicans boosting Bernie will likely yield the same result. Ring of Fire’s Farron Cousins discusses this.

Republicans have decided that it will be a good idea for their party if they boost Bernie Sanders and try to make him the nominee for the Democrats because they believe it’s going to be super easy for Donald Trump to beat Bernie Sanders in the general election. This is not speculation. This is what several prominent Republicans have said. You have Hugh Hewitt out there, conservative talk show host, who is actively telling his followers that he in Virginia, which has an open primary, is going to go out and vote for Bernie Sanders because he wants Sanders to be the Democratic nominee because he thinks Trump will beat Sanders. He wants his viewers to do the same. In South Carolina, Republicans have come up with a plan to vote in that States open primaries to elevate Bernie Sanders, give him the South Carolina victory, which would be huge and hopefully it just snowballs from there and Bernie Sanders wins.

But one conservative pundit is issuing a warning to Republicans and he’s telling them, be careful what you wish for because you just might get it. That conservative columnist is Matt Lewis from the Daily Beast who says that every time they have tried this in modern history, it’s backfired. It backfired on the Democrats when they tried to boost Ronald Reagan in the 1980 election because they thought for sure nobody’s going to vote for this former actor. Right? That’s ridiculous. Who’s going to do that? Turns out everybody. They did it in 2016 trying to boost Donald Trump in the Republican primary because they thought it would be a cakewalk taking on that dude in the general election, and we’re living with the consequences of that stupidity. But Republicans never one to learn from anybody’s stupidity, including their own, have decided, let’s do the same thing that’s failed every other time a different party has tried to do it.

The fact right now, and this is what’s so confusing to me right now, Bernie Sanders beats Trump in the national polling. He’s only losing to Trump by two points in the state of Texas, as of right now. He beats him in Florida by a larger margin than any other Democratic candidate. He beats him in Wisconsin. He beats him in Ohio, beats him in Pennsylvania and Iowa. Bernie Sanders beats Trump, and by the largest margins of any other Democratic candidate. Bernie Sanders is not sitting on a wealth of damaging material about his career either, like a Michael Bloomberg, with all these hidden audio recordings coming out. Bernie Sanders is in the best position to beat Donald Trump, and yet Republicans somehow think that he’s the weakest. His policies are the most liked out of any Democratic candidate, and that includes among Republicans, and they think that boosting him is somehow going to help Donald Trump. They are falling into the same trap that Democrats fell into for almost 40 years, and hopefully it has the same effect. I have no problem with Republicans boosting Bernie Sanders to become the nominee. If that’s what it takes to get him to be the nominee, then heck yeah, let’s do it. You know what? Let’s just do it. But it’s not going to end for them the way that they think it will.