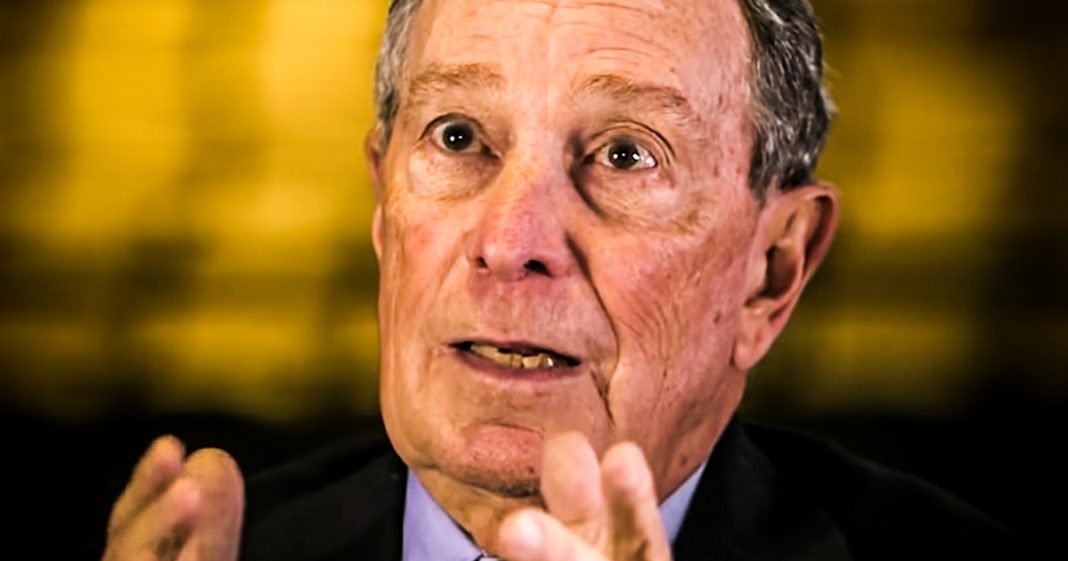 Michael Bloomberg’s campaign has released a new video going after Bernie Sanders’ online supporters. The video features angry tweets attacking Bloomberg and other candidates, trying to shame the internet into backing away from Bernie. There are vile supporters of every candidate on social media, and Bernie is not unique, except that he is the only one who has told his supporters to stop it. Ring of Fire’s Farron Cousins explains how Bloomberg will fare in a general election if he can’t handle a few mean people online.

His campaign also released a list of tweets from people who work for Bernie Sanders campaign. Now, these tweets were not vicious and they were not filled with lies or profanities. These tweets were actually just facts about how horrible Michael Bloomberg is and Bloomberg thought it would be a good idea to use those in a little campaign mailer showing how horrible he is. Here’s the thing, I have said this repeatedly are they’re horrible people online that support Bernie Sanders. Yes. Just like there’s plenty of horrible people who support Michael Bloomberg and horrible people who support Elizabeth Warren and Pete Buttigieg and Joe Biden and all of the other also rans. They’re everywhere. All you have to do is look.

If you want to focus explicitly on the people who support Bernie Sanders, that’s pretty easy to find. You can find plenty of hate and vitriol in Buttigieg supporters too and Biden supporters. There is just as much hate against Bernie Sanders on social media as there is coming from people who support him. It just depends on which one you choose to look at, and Bloomberg and all of the other establishment Democrats only want to look at the horrible things Bernie supporters are saying and not all the horrible things that the supporters of other candidates are saying. This is not unique to Bernie Sanders, but what is unique about Bernie Sanders is that he is the only one who’s come out and said, I want my supporters to knock it off. I want you to stop it. And in spite of the fact that corporate media, including MSNBC, repeatedly say, Bernie needs to denounce this, he has, you’re just not acknowledging that he has done this.

Also, what you’re not acknowledging is the fact that Michael Bloomberg has already spent $350 million of his own dollars to buy himself into the White House. He already bought himself onto the bait, onto the debate stage, tomorrow night in Las Vegas. Didn’t qualify, but once again, the DNC changes the rules to allow him on stage and it’s going to be a bloodbath. Michael Bloomberg has not faced any criticism from his fellow candidates since all of this damaging info about him was released, honestly, just a week ago, and they’re going to tear into him and the public is finally going to see what the real Michael Bloomberg is all about. Not the smiling face that accomplished oh so much that we see in all of those ads running all over the country, costing him millions of dollars. Not that Michael Bloomberg, we’re finally gonna see the real Michael Bloomberg. And here’s another tip, and this goes for anybody running for president.

If your only line of attack against a candidate is to spend a couple million dollars to run an ad attacking randos on Twitter for being mean to you, then you’ve already lost. If there were legitimate reasons to attack Bernie Sanders, these people would be running ads on that. These people would be calling that out on MSNBC and the other candidates would be talking about that on Twitter. But no, they’re all just talking about those mean old people who Bernie Sanders has never met and is not affiliated with and how mean they are. And if you can’t handle a little bit of criticism from random anonymous people on Twitter, then what the hell are you gonna do when you face off with Donald Trump on that debate stage and he insults you personally for two and a half hours?