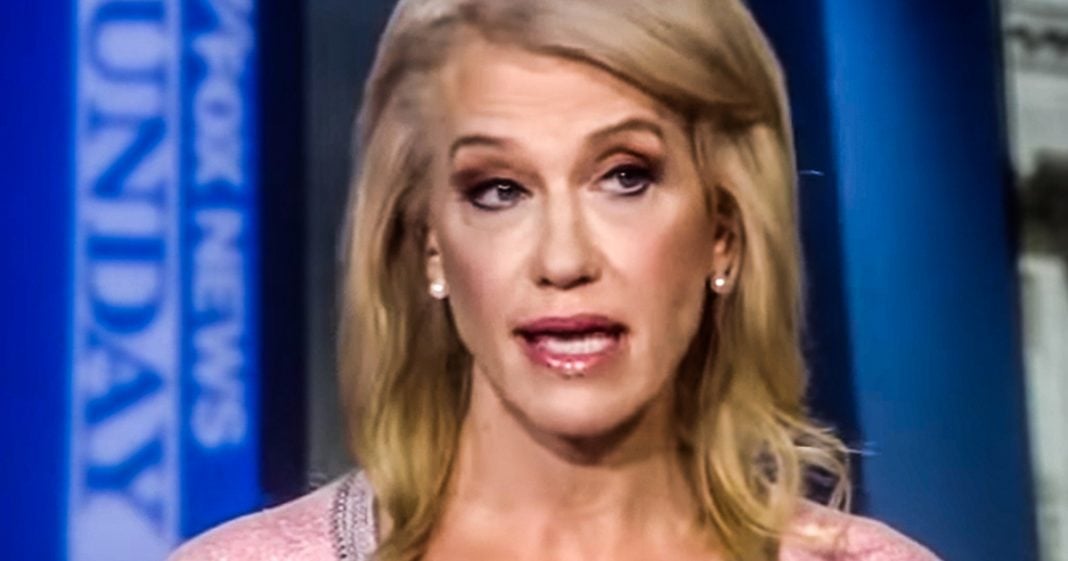 Appearing on Fox News this weekend, Kellyanne Conway railed against Mike Bloomberg’s history of sexism and accusations of harassment while completely ignoring all of the women who have accused her boss, Donald Trump, of assault. Conway is previewing the lines of attack that Republicans will launch against Bloomberg, and even though they are guilty of the same things, their base won’t care. This just proves further that Bloomberg is a horrible candidate, as Ring of Fire’s Farron Cousins explains.

Appearing on Fox news Sunday this past weekend, Kellyanne Conway said that Michael Bloomberg’s sexism and history of being just downright horrible to women is actually somehow worse than Donald Trump’s history of being horrible to women. Now let’s start with Bloomberg, right? Like Kellyanne Conway did, because she’s not wrong about how horrible the things that Bloomberg has been accused of doing are. I mean, reports over the last few days have shown that Bloomberg once told a woman to kill it when she told him she was pregnant. And then shortly thereafter another woman came forward and said, he said the same thing to me. There are 40 instances all together of Michael Bloomberg making unwanted advances, comments or other kinds of harassment towards women. Just like there’s roughly 40 women who have accused Donald Trump of harassment or assault. So these two scumbags are pretty much right up there, tied with one another, but not in Kellyanne Conway’s eyes.

And that’s the problem because she’s right with what she’s saying about Bloomberg. And it shocks me to have to admit that Conway was right about this, but she is, Bloomberg’s conduct should be disqualifying. It wouldn’t necessarily if he were running as a Republican, but come on folks. We’re Democrats, right? We’re supposed to be the party that’s, that’s, that’s pro choice. That’s pro women. And here we are positioning ourselves to accept millions of dollars from this scumbag so that he can buy his way to become our nominee. Even with his history, with what he has said and done to women over the years. Come on, we’re better than that. The Republicans aren’t, but the Democrats are supposed to be, or at least they used to be. They like to think that they are, but clearly they are not. But Kellyanne Conway is wrong when she says that Bloomberg’s past is worse than Trump’s.

It’s actually not because as far as I know, Bloomberg has not been accused of any form of assault. Donald Trump has, Donald Trump is actually fighting a lawsuit right now because he allegedly raped a woman and then defamed her. Bloomberg is not going through that. Bloomberg’s not on tape, like the access Hollywood tape, where he admits to going up and groping and assaulting women even if they don’t want it because they let him do it because he’s rich. Bloomberg is on tape, however, saying that African Americans and Hispanics need to learn how to behave and that maybe we stop white people too much with stop and frisk and we don’t stop black people enough. So Bloomberg has his own troubling audio out there, but with regards to women, I wouldn’t say that he’s worse than Trump. I wouldn’t say that he’s better than Trump. I would say that they’re both equally horrible and should be treated as such. All of the people out there who’ve been making a big deal about all of the accusation, it’s, accusations against Donald Trump for years who are now suddenly supporting Bloomberg, you’re all hypocrites. And unfortunately that is what Kellyanne Conway exposed on Fox news Sunday, the hypocrisy of all of this.

We can’t sit here on our high horse and talk bad about Donald Trump if we’re going to turn around and support a guy like Michael Bloomberg, you simply cannot do that. But that doesn’t give Trump a pass, and it doesn’t mean that Bloomberg’s is not quite as serious. It’s all equally terrible. But this also does give you a good indication of what kind of line of attack the Republicans are going to launch against Bloomberg because just like they did with Joe Biden saying that the man is crazy and mentally unstable, even though Trump’s guilty of the same thing, they’re going to do the same thing with Bloomberg except with women. This guy’s horrible with women. He’s horrible for African Americans. Yeah, so is Trump, but his base doesn’t care and they have already captured the narrative. And that’s why nominating Michael Bloomberg would be political poison for the Democratic party in 2020.