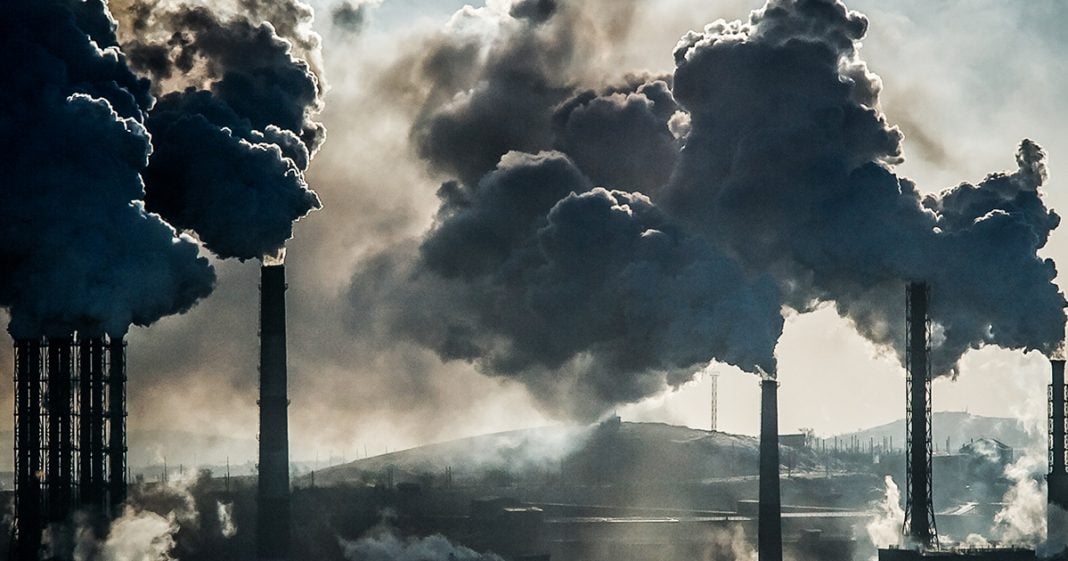 Earlier this month, the planet hit a dangerous milestone of 416ppm of carbon dioxide. It has been nearly a million years since atmospheric CO2 levels hit this high, and the news in the United States didn’t even cover this event. Climate Change is getting worse, and as a planet we are doing very little to solve this problem. Time is running out, and we have to get the deniers out of office to reverse these trends. Ring of Fire’s Farron Cousins discusses this.

Earlier this week, the world hit a dangerous and potentially deadly climate change milestone and that was that the level of CO2 in our atmosphere reached 416 parts per million. Now, if you’ll remember, we’re supposed to get it at 350 parts per million or even less than that and we hit 416 parts per million in case you were wondering how bad that is. Let’s put it this way, it’s been over 1 million years since the Earth’s atmosphere has had more than 416 parts per million of carbon dioxide and a lot of this is coming. Yes, from the bush fires that took place in Australia, that released a lot of carbon into the atmosphere, but the just general increase in co two in our atmosphere is continuously coming from the burning of fossil fuels. That’s it. That’s the thing, and the burning of fossil fuels exacerbating climate change is what helped cause these wildfires in Australia. The bush fires, it’s all related. The more we release, the worse it makes the planet causing even more to be released. Folks, that’s what’s happening now. This story, 416 parts per million. Let me ask you all a question. Where did you see this reported? What news outlet did you turn to to find this story?

Climate change is an issue. Yeah, it’s a little bit complicated. It’s not sexy. It’s not Sean Spicer going out there and offering sexy Valentine’s messages for $200 it’s not Donald Trump tweeting something stupid. You go look at the views of what this video has on it right now. I don’t even care when you’re watching it. It may be six months ago this video was posted and compare it to all of the videos on our channel around it. Which one has less traffic? I guarantee you if this one doesn’t have the lowest for the last couple days, it’s at least in second or third from the bottom because people just don’t care. That’s what gets so frustrating about covering these climate change stories all the time. Not that, Oh man, I’m not getting the views. It’s that not enough people are learning what’s really happening on the planet. That is devastating because this is the kind of issue we can’t actually ignore and I don’t care if it’s not getting clicks. I don’t care if these videos aren’t getting ads. I’m going to continue talking about it because it’s my duty as a human being to talk about the issue of climate change.

Folks, we were given 12 years, about a year and a half ago and nothing’s changed 12 years before the really bad effects of climate change pretty much became irreversible.

Year and a half gone and we’ve done nothing as a, as a planet. There is still time. There is lots of time and that’s why I like to talk about these issues. Hopefully to help motivate people. We’ve got some great climate activists out there on the, uh, in the world right now telling us these things and they’re getting people energized, but until we have a media, both corporate and independent that actually covers these stories, the average American citizen, those, they’ll see people like Greta Thunberg and they’d be like, Oh cool, cool. Yeah, she’s doing great. I’m going to go over here. Now I’m going to, you know, tune to something else. I think Trump’s had some funny on Twitter. Oh my God, that can’t be it. That can’t be how we react to these stories of climate change.

This is an issue that affects every single person on this planet. Rich and poor alike. Doesn’t matter what religion you are, it doesn’t matter the color, a color of your skin, doesn’t matter how big your bank account is, doesn’t matter your sexual orientation. Climate change will affect us all. And I think it’s beyond past time that we start treating it as the massive global issue that it is. Because there is still time we can do something about it, we can fix it. We can come together as a species and solve this problem, but we can’t do that until two things happen. One, we get the money out of politics and therefore get the deniers out of our politics. And two, we get the media to start actually caring about what’s happening to the planet.