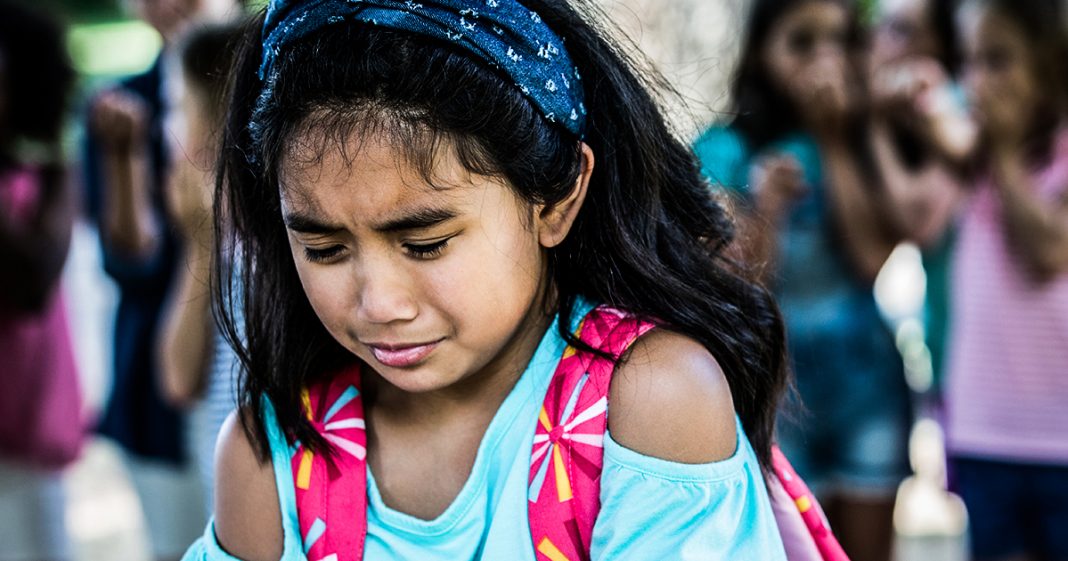 According to a new Washington Post report, school children have been bullying their classmates by using the exact words that Trump has been using since he became president. This includes harassment of Muslim students, harassment of Hispanic students, and far too many other instances. The country is failing its children by allowing someone like Trump to be the role model for a generation, as Ring of Fire’s Farron Cousins explains.

Melania Trump’s project is her Be Best campaign, which is basically to go out there and tell kids, do not bully one another at school. Do not bully one another online, don’t be a bully. It’s a great message that really she’s doing a horrible job conveying out there because according to a new report by the Washington Post, instances of bullying in schools across the country are increasing and the bullies themselves are increasingly using language borrowed from Donald Trump or directly invoking his name in their attacks on other students. I have to read this paragraph from this Washington Post report. This is, this is amazing. It said two kindergarteners in Utah, two kindergarteners in Utah, told Latino boy that president Trump would send him back to Mexico. Teenagers in Maine sneered ban Muslims at a Muslim classmate. In Tennessee, a group of middle-schoolers, linked arms imitating the president’s proposed border wall as they refused to let non-white students pass. In Ohio, another group of middle-schoolers surrounded a mixed-race sixth grader and as she confided to her mother, told the girl, this is Trump country. And those are just a few examples out of the more than 300 that the Washington Post was able to identify of instances of bullying where the bullies, some as young as six years old invoked Donald Trump’s language or his name.

This is the president of the United States and I don’t think there’s much question left in this country that he’s a horrible human being. Even most Republicans admit that he is not a good role model for, for children. He is not somebody who they want their kids to imitate and they simply flat out don’t like his personality. But by God they love his politics. But this is the problem, folks. You can’t separate the politics, the policies, from the personality. It’s all the same package. So I don’t care if you’re out there saying, yeah, but I love his tax cut. I love being a member of the 1% and getting that money. I just wished little Johnny here wasn’t going there and beating up all the Muslim kids at school. Oh, tough call, right? It’s really not. If you vote for Trump, you’re condoning this, you’re endorsing this, your owning this, and let’s be fair a little bit too, right, as I mentioned, Washington Post identified a little more than 300 incidents of bullies invoking Trump or his name. 45 incidents of pro Trump students being bullied by anti-Trump people. So yes, those 45 incidents are bad. Right? And that shouldn’t happen either. But 300 on one side and only 45 on the other. I think we know which one’s the bigger problem, but which one is the one that Fox news is going to focus on? They’re going to focus on the 300 plus six year olds and above who have been bullying people in Trump’s name or are they going to focus on the 45 who, I was wearing a MAGA hat and the teacher made me take it off?

Because some of those instances, that’s what it is. I wasn’t allowed to wear my MAGA hat, even though I know hats aren’t even allowed in my school. I was made to take it off because they hate Trump so much. Meh, that’s not how it happens. But nonetheless, nobody should be bullied because of their political beliefs. Just like nobody should be bullied because of their religion or their sexuality or their race or their income or anything else. If Melania Trump was serious about her Be Best campaign, that is what she would be going out there and saying, but she’s not serious about it. When was the last time she even did an event for it? You know, every six months she comes out and does a little Be Best speech and then disappears for another six months. That’s not how you solve this problem and you certainly don’t solve the problem by lying in bed every night next to the worst bully this country has ever seen serving as president of the United States. These six year olds that are out there saying, Trump’s going to send you back to Mexico, they can be saved. That 70 plus year old white nationalist serving as prejudice, president of the United States. He can’t. So we need to forget him and try to fix our kids before they turn out just like him.