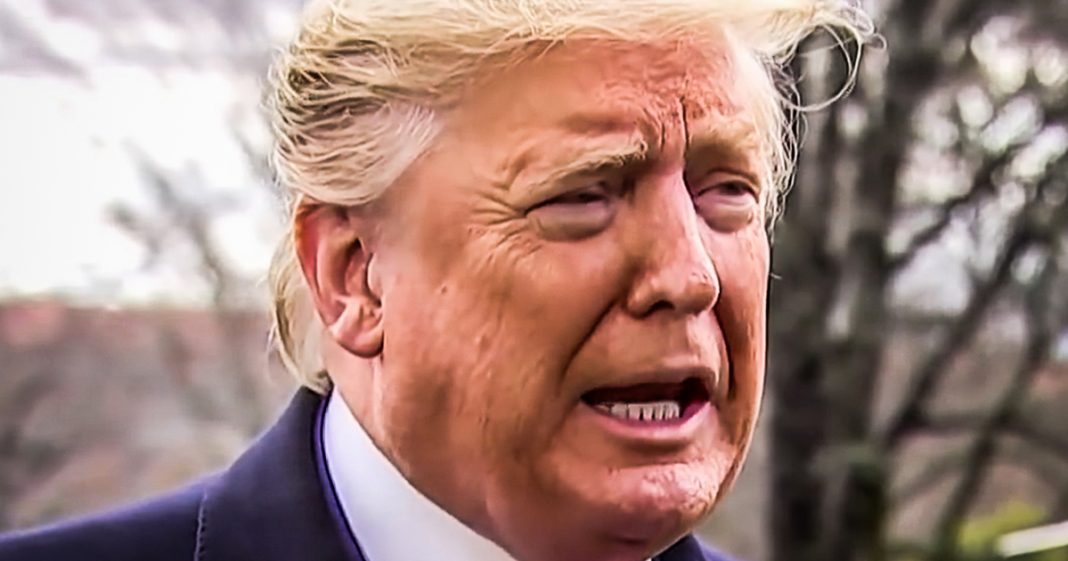 Several mental health professionals have noticed yet another symptom that would indicate that Trump’s mental health is on a rapid decline. They’ve looked at his speech patterns over the last few years and found that his vocabulary and sentence structure has become less and less sophisticated and more simplistic, which typically happens with a neurodegenerative disease. Ring of Fire’s Farron Cousins explains what’s happening.

Several different mental health professionals who have been looking at Donald Trump for several years now have essentially identified a new symptom that would almost certainly indicate cognitive decline with the president of the United States, possibly even a neurodegenerative disease. And that symptom is his speaking pattern and his vocabulary. See these mental health professionals, psychologists, psychiatrists, they’ve pointed out in a recent article by the international business times that over the last few years that Trump’s been speaking publicly as a politician, his language, the vocabulary used, has gotten more simplistic. He’s using fewer and fewer big words, and his sentences are becoming shorter and his stories are becoming more incoherent. You can’t follow his train of thought anymore, not that you really could to begin with, but they have noticed after analyzing past and comparing it to present and everything throughout, there has been a pattern of the president speaking abilities.

Now, this is not even referring to his frequent slurring of words these days, but what these professionals are telling us is that this very likely could be a symptom of something happening inside his brain. Now, they also offered several other explanations. So let’s talk about those. Obviously he’s over 70 and they pointed out that as you get older, specifically when once you hit over 70 this happens. This is normal, but they also pointed out typically you don’t see it to the degree that you see with the president of the United States unless there is an underlying issue. So we can likely rule out this just being because of his age. They also said could be the stress, the stress of being president, the stress of all the scandals, stress, stress, stress, stress, stress, right? I mean we saw the last, you know, five people went into the white house looking bright eyed and bushy tailed and they left looking haggard and old and just ready to get the hell out of there.

But here’s the thing, Trump doesn’t look like that. Trump looks no different today than the day he stepped into office. You could see a visible decline in Clinton, Bush Obama by the start of their fourth year, fourth year. You don’t see that with Trump because the guy’s always on vacation. He’s always out there playing golf on average once every four days. He’s taken a break. We know that his schedule is filled with pretty much nothing at this point, other than executive time where he tweets out what’s on Fox news and what’s coming up on Fox news. He’s president TV guide at this point, so I think we can probably rule out stress because I don’t think this man has ever been stressed a day in his life, but then there’s another thing that they mentioned that it could be because of this, and I think this one has some merit. They think or they say maybe his simplistic speaking habits is use of fewer and fewer big words and his use of smaller sentences could be because it resonates better with his base. Now what does that say about the base?

We know what it says about the base. We know what they’re saying right here. You’re not the smartest bunch out there. So the president thinks he has to use smaller words in essence, they’re telling us either the president has a brain disease or he thinks his supporters are stupid. That’s what the president thinks. He wouldn’t be using smaller words intentionally if he thought his supporters could understand the bigger words, if they, he thought they could understand the longer sentences and the more complex ideals. So maybe that is why he gets up there and he does his lean on the podium and Crazy Nancy, Nervous Nancy Pelosi, ah, ah, which on, eh, eh, his supporters understand those words and he knows that and they give him a round of applause and they start chanting their lock her ups, and now it’s lock him up with Joe and Hunter Biden. So those are our two options according to the mental health professionals. Either there’s something wrong in Donald Trump’s brain, or he understands that his base is stupid and he’s just trying to play to them. Now, if I were a Trump supporter, I don’t think either of those two possibilities would make me feel good about my choices.