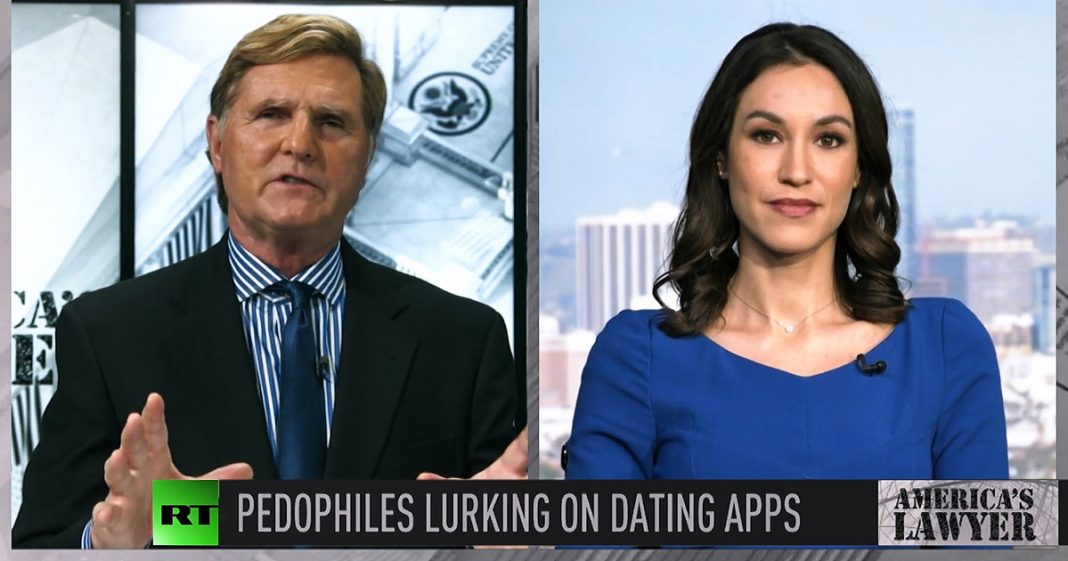 Via America’s Lawyer: RT Correspondent Brigida Santos joins Mike Papantonio to outline how Congress is now stepping into the world of online dating, as free versions of online dating apps have attracted sexual predators who target minors on these popular platforms.

Mike Papantonio:             Congress has announced an investigation into the safety of dating apps for reportedly allowing registered sex offenders and minors to use free digital dating services. The investigation comes in response to media reports about sexual predators using dating apps to lure and attack minors. RTs Brigida Santos joins me now with another one of her stories. She’s always at the edge of a story like this, so give me the edge on this one, Brigida. The, you know, I saw, we saw stories like this about six months ago and then they disappeared. Now this story is back in, in play because people, people are now saying, let’s investigate. What’s your take on this story?

Brigida Santos:                   Yeah. Yeah, and at least there is an investigation right now. The chairman of the subcommittee on economic and consumer policy has launched an investigation into the use of free online dating services by minors and the presence of sexual predators on those same dating sites. The inquiry comes in response to those reports that you were talking about, that many popular dating apps are allowing registered sex offenders to use them while the paid versions of those same apps screen out those registered sex offenders.

The committee has asked several dating services to produce documents about their policies and procedures for determining and verifying the age of their users, whether registered sex offenders or people convicted of violent crimes can use their platforms, how they determine whether someone is a minor or a sex offender, and to submit all consumer complaints related to minors, statutory rape, sexual assault, or rape. Some dating services that have been asked to deliver those documents include the Meet Group, Grindr and Bumble as well as the Match Group, which owns most major online dating services, including Tinder, OkCupid, Hinge, and Plenty of Fish.

Mike Papantonio:             You know, Brigida, I remember doing this story, maybe God, it seems like a year ago, and what we were hearing is, well, you know, you’re giving us anecdotal information. These are just hypothetical stories. These aren’t real life stories. You’re, you’re, you’re embellishing what might happen. The stories that Congress is hearing right now, these are real cases. I mean, and these are really, really bad cases aren’t they? Talk about that.

Brigida Santos:                   Yeah, they’re not hypothetical anymore. There are many disturbing stories. You know, teenagers are accessing free dating apps by simply lying about their ages. Sites like Tinder claim that they block underage users but they really don’t. And to give you an example of a real life case, a Missouri man recently pled guilty to third degree child molestation after he was charged with sodomy, statutory rape and kidnapping an 11 year old girl on a dating app. Because these sites are often international, these apps, similar incidents are also being reported all around the world. For example, the UK has discovered dozens of instances of pedophiles using dating apps to abuse and prey on children. Some of them as young as eight years old.

This brings me to the next big issue, these dating services don’t conduct background checks on users. While the companies absolutely hold some responsibility, parents need to be aware that giving their kid a smartphone will give them access to these apps and they need to take measures to make sure that their kids know about the dangers of them and that their kids don’t get access to them. Several companies have also been accused of selling and sharing users’ personal data. So they’re looking into that as well.

Mike Papantonio:             Brigida, my next guest up after you actually is going to talk about the relationship between these dating apps and child trafficking, human trafficking and they’re, it’s inescapable. These apps are also be, being used as the go between for what they call the room, the Romeo take. That’s where, you know, you start off, somebody believes that they’re falling in love with somebody, meet me someplace, and then these things are used for human trafficking in a big way. So the next story we’re going to do is actually going to talk about it, but the investigation is going to be looking into how these companies collect and share user’s personal data. Which is incredible that they’re sharing it wherever they want and they’re taking advantage of it any way they want. What can you tell me about that?

Brigida Santos:                   Well, the committee on oversight and reform says that American consumers may not receive adequate notification of the commercial use of their sensitive personal information from these dating apps, including sexual orientation, gender identity, drug and alcohol use, employment, political views and so on. It is asked that the company submit all documentation on their data collection practices and any information about the third parties that they’re sharing that personal data with and that’s all well and good, but I’d like to see Congress also do the same for other internet companies that are also collecting data.

Mike Papantonio:             Last, last question, Brigida. Is there any question in your mind that these apps know exactly what they’re doing? That they understand exactly how this is being abused both as to this and to human trafficking. What’s your take?

Brigida Santos:                   Yeah. There is no question to it. They absolutely know, especially because of all the news stories that have come out revealing it. So if they are saying that they didn’t know before, they certainly know now and it doesn’t seem like they’re taking any measures at this point to really crack down and try to stop this abuse that’s going on.

Mike Papantonio:             Brigida Santos, keep busting them up on this, this is an important story. Thank you for joining me. Okay.